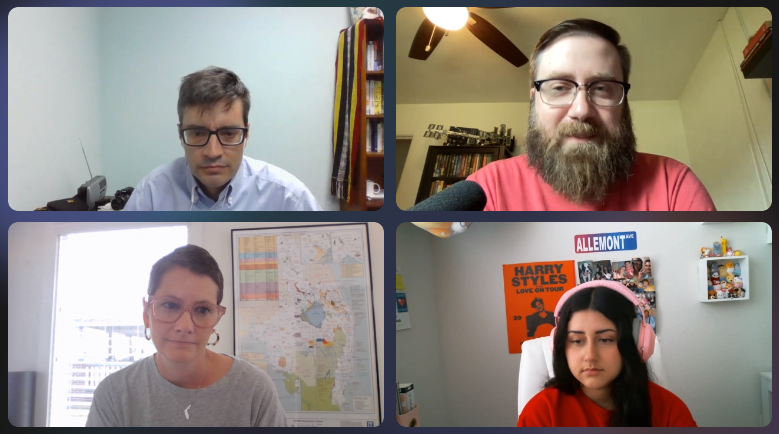 COVID-19 was in the US by the early months of 2020, but it wasn’t until March of that year that the wider impacts of the pandemic began to be felt across the country.

COVID-19 also ushered in a new era of journalism and reporting as social distancing and other health measures began to take effect. Two years on- we turned to members of WMFE’s news team and asked them to flip back through their reporters notebooks from the last couple years.

Environmental reporter Amy Green, space reporter and host of Are We There Yet, Brendan Byrne, and Intersection intern and UCF journalism student Allegra Montesano discuss the challenges of reporting through the pandemic and the lasting impact it’s had on their journalism.

“At first, I felt kind of guilty doing these space stories, because there was a much more pressing issue to tackle,” says Byrne of the first months of the pandemic.

“But it got to a point where we needed something to be excited about or something to take our attention away from what was happening. And it seemed that space was was a great way to do that. It’s always been an inspirational topic.”

Byrne says while 2020 marked a significant milestone in space exploration- the return to human launches from US soil- covering it was not the celebration it would have been without the pandemic looming.

“This was the first launch of humans in 10 years. And NASA had to go out there and say, guys, don’t go out in public. Don’t go watch this. Just watch it from home, which was very disappointing.”

Montesano says learning the basics of reporting without being able to interview people in person was very different from how she imagined her first year of journalism would be.

“We’d always hear stories from like, guest lecturers over zoom who would be like, ‘Yeah, I went to a marathon and I interviewed someone who was running there. And I ran with him.’ And I was always, like, that sounds so exciting. I wonder when I’m gonna get to that point where I can go do that sort of journalism,” says Montesano.

Green says she went back to the office in July 2020, the first time she had returned there since the news team went remote in March of that year. A newspaper from March was still at her desk.

“And the top headline on the front page had to do with the Trump administration closing off US borders to international travelers from Europe,” says Green.

“So, you know, we were all a little naive and unprepared for where this was going to head, I think.”

Green published a book about the Everglades, ‘Moving Water‘,  in 2021.  She says the pandemic made for a very different book tour than what she was expecting.

“I did all of those book events on line, which was obviously disappointing, but on the plus side, I was able to, you know, reach more communities.”

Montesano says the pandemic has had an impact on how she approaches journalism.

“I think if anything, it’s made me a little more versatile,” she says.

“I was thinking originally, like, you can only get a story in person:  that’s the best way to do it. Like, if you really want to get a good, important story, you’ve got to be there. And I think definitely it still is important. But it’s doable. I think that it’s doable in any way you can whether it be over zoom or running across the city.”

“We’re creative, and this will not be the last time that we have to get creative and figure out new ways to tell stories, despite these immense challenges that are happening to us,” says Byrne.

“But I think all of us in the newsroom know how important we are to our community. And we know that there is an immense responsibility that we have to provide that information to our community and we’re going to keep doing it now. You know, no matter what gets thrown our way, we’re going to be able to do it.”