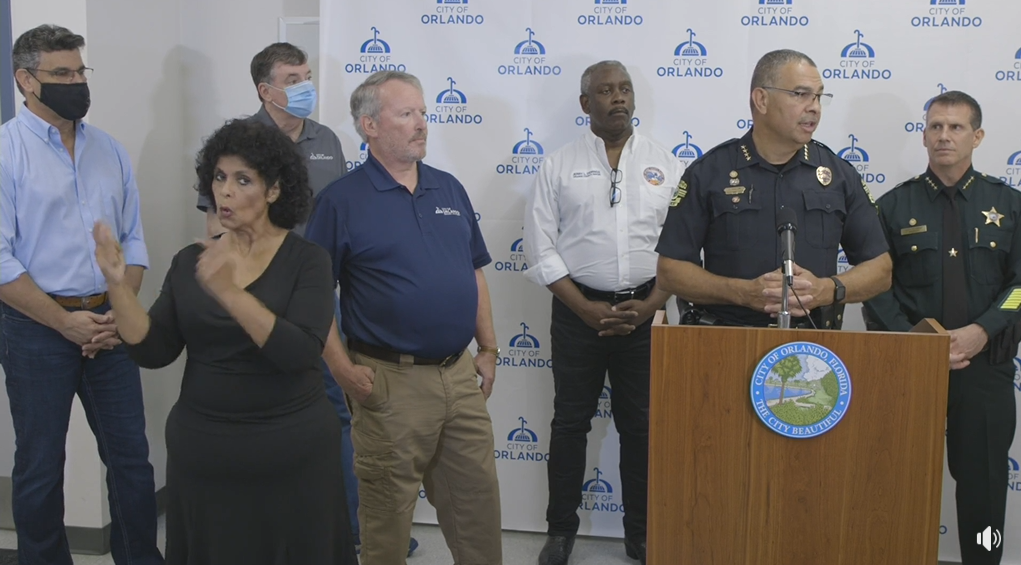 Leaders in Orange County are implementing a curfew after more than a dozen people were arrested Saturday.

The arrests were made following a day of mostly peaceful protests.

“Because of some things that happened within the last 24 hours where we saw some destruction of properties, I’m compelled to announce that we will be enacting a curfew in unincorporated Orange County until further notice,” said Orange County Mayor Jerry Demings at a press conference in Orlando Sunday afternoon.

“That curfew will be going to effect tonight, beginning at 10pm and will go each night until 5am in the morning,” said Demings.

A curfew is also in effect for the city of Orlando. Demonstrations have erupted in cities across the United States after the death of George Floyd who was killed while in the custody of Minneapolis police. Former Minneapolis police officer Derek Chauvin has been arrested and charged with third degree murder and manslaughter, after a video showed his knee pressed on Floyd’s neck.

Demonstrators began gathering outside a Windermere house belonging to Chauvin on Friday, and protests continued in Windermere and throughout the city of Orlando on Saturday.

“Some began to throw fireworks at Officers,” said Rolon.

“In order to stop the aggression towards the officers they used our pepper spray and chemical agent to safely de-escalate the situation and avoid a physical altercation with the demonstrators.”

OPD said six people were also arrested after a confrontation on the 408 expressway, where demonstrators had blocked the roadway for about 35 minutes.

He said the smoke was followed with a chemical agent.

Rolon said that people had thrown “flammable items such as fireworks” at the OPD headquarters during the night.

At least eight people were also arrested in connection with an incident near the Milennia Mall.

“Police learned about the group and we were ready for them when they arrived,” he said.

“I want to again strongly denounce the actions-  the now criminal actions-  of the former police officer in Minneapolis, as I’ve said many times, it’s indefensible, unexplainable, and definitely a violation of the law,” said Orange County Sheriff John Mina.

“We know our nation is hurting, our communities are hurting and we understand that,” said Mina, adding that deputies had been outside the Windermere house belonging to Chauvin for the last few days “letting people gather and peacefully protest for three days.”

He said two deputies were hit with pieces of concrete last night. In incidents that were not related to the demonstrations, half a dozen businesses were broken into and damaged and two people were arrested, said Mina.

He said two women were also arrested for defacing Chauvin’s home with paint.

Mina said all of the police chiefs and sheriffs in the area have denounced Chauvin’s actions.

“The Fraternal Order police here in Orange County, sent a letter calling that action, calling that former officer a murderer. So that’s something I don’t think you’ve ever seen, at least around here from our police unions.”

“If you want to bring about change, be the change”- Mayor Demings

Mayor Demings said it was important to acknowledge “systemic problems with racism in America.”

“I can stand here as an African American father of three African American males, grandfather of five children, one male, as a son of a man who was born in the south, who was born in Alabama, and yet lives on at nearly 90 years old. The racism that we have in America, I’ve certainly experienced. And so I get it, when it comes to understanding the call to action that we are seeing all across America,” said Demings.

“But as we respond to that call to action, I believe that that response has to be one that is thoughtful and peaceful, with a healthy respect for the rule of law.”

Demings said he would work to address those systemic issues, urging people not to resort to “lawlessness”.

“And so if you want to bring about change, be the change. You have to get involved in your community. And there are healthy ways to do that: through advocacy by getting involved and volunteering in your community by running for political office, about being the kind of leaders that you want to see.”

“What happened to George Floyd was horrific. It was unacceptable. And it wasn’t the first time: it follows horrific deaths… killings of Brianna Taylor, Ahmaud Arbery, and too many other black Americans.”

“Now, I will tell you as a white male, I can’t stand here and tell you that I fully understand the hurt and the fear many people of color experience every single day in our country. But what I can say is that I see you, that I hear you, and that above all else, we will not remain silent.”

Dyer said he was proud that for hours on Saturday, residents demonstrated peacefully across the city.