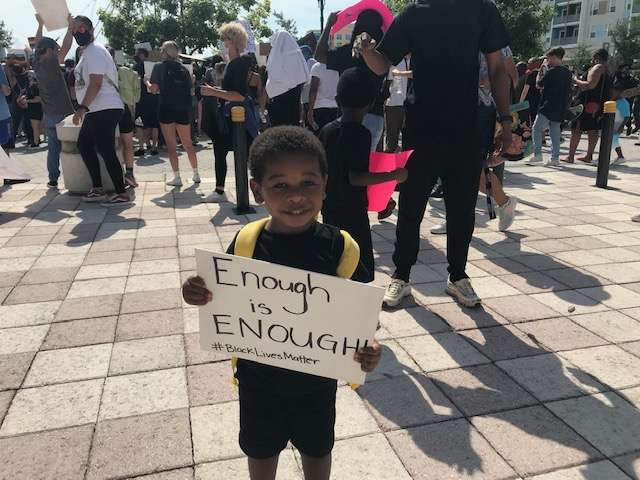 Hundreds of Orlandoans called for an end to police brutality at a Black Lives Matter protest on Saturday outside the Orange County Courthouse.

The protest came a week after George Floyd, an African American, died in police custody. Former police officer Derek Chauvin, who is white, was charged with his murder.

The crowd held signs and chanted “No Peace, No Justice” and “Hands Up, Don’t Shoot” as they marched in front of the courthouse and up and down along Orange Ave.

Banks said she wanted to be there to represent the past and future victims of police brutality even though she was worried about her own safety in attending.

DaShana Honore was there with her two sons-2-year-old Carter and 5-year-old Noah.

Honore said she was worried about her sons’ safety but she wanted them to know what it felt like to be in the belly of the beast-even if it was from the back of the crowd.

The protest was peaceful with a strong City of Orlando police presence.

It coincided with Black Lives Matter protests around the country-from Minnesota to Michigan where the first protester died when someone fired into the crowd.

We all need to protest, which takes many forms.

Tomorrow night bring your rage, your love, your fire. Share images of yourself in your practice and at your altar using #TurnUpAtYourAltar

This is an invitation to meet each night in whatever way we need.

To hear voices from the protest, click on the clips above.