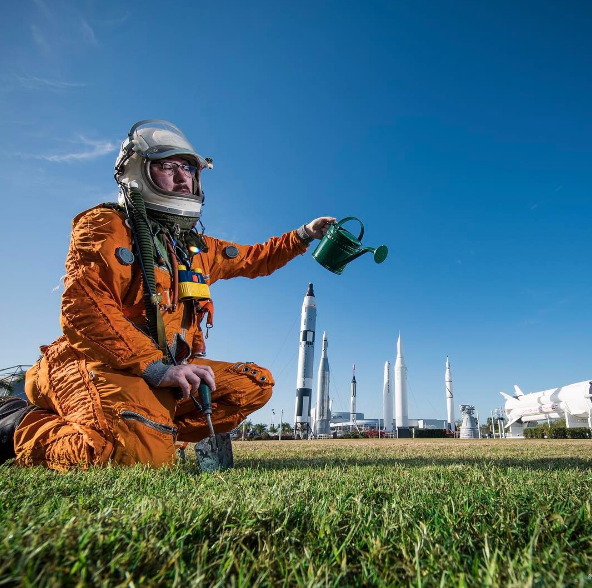 Photographer Tim Dodd is better known as his alter-ego, the “Everyday Astronaut.” Wearing a bright orange flight suit he bought on an auction website, Dodd creates humorous and inspiring photos that bring the world of space flight to the everyday person. Dodd invited 90.7’s Space Reporter Brendan Byrne to join him on a recent photo shoot at the Kennedy Space Center Visitor Complex.

Standing in the middle of the rocket garden, a collection of real and mock-up rockets that pepper the lawn at the Kennedy Space Center Visitor Complex, Tim Dodd unpacks the suit and starts putting it on, one foot at a time. Pieces of his space suit are thrown around his feet – a helmet, communication’s beanie cap and air hoses, and a pair of toy binoculars.

“When I was a young boy, I had these Fisher Price binoculars,” said Dodd as he slips them over his head. “I would look through them and wanted to explore and discover things. I guess that exact same thing transitioned through as an adult. As I’ve grown to love space, I try to keep that childhood awe of the cosmos and the universe.”

The suit he wears for the photos is a 1980’s Russian high-altitude flight suit. On a whim, Dodd found the suit on an online auction site for aerospace memorabilia. He bought it. He taught himself how to use the suit, and now it’s taken on a life of its own (and almost taking his life, too). Dodd finishes the suiting-up process – something he’s down countless times. He zips up the suit and slips on a neck ring.

“The worse thing in existence, especially in the Florida heat,” Dodd says of the silver ring that sits on his neck, almost completing the look. “Then there’s the helmet. Once that thing closes, all of the heat in the entire universe culminates around one center part around my brain.” Not even five minutes after donning the suit, Dodd is starting to sweat.

Along with shooting conceptual photographs for his website and Instagram, Dodd films short educational videos he posts on his YouTube channel. This year, Dodd gave up his job as photographer to focus on the Everyday Astronaut full time. He’s creating educational contact like videos and live streams that he hosts online. Working with another space journalist and photographer, Robin Seemangel, Dodd runs around the Rocket garden with childhood bliss.

After filming in front of just about every rocket in the garden, and reciting facts about each without a script or notes, Dodd sets up for his conceptual shot: gardening at the rock garden.

“I keep this long tally of ideas,” said Dodd. He lives in Iowa, so it’s not every day he can drive out and visit the rocket garden. So when the opportunuty presented itself to travel to Florida and visit the garden, Dodd jumped on the opportunity.

With some help from Seemangel, Dodd sets his camera, arms his flashes and grabs his props – a water can and gardening trowel that made the long drive from Iowa.

Dodd pretends to water the rockets. He’s about 50 yards away from the rockets, so it looks a bit silly, but because of the lens he’s using, it looks like he’s normal size and the rockets are tiny – a technique called forced perspective. Dodd tweaks the angle of his water can, and moves ever so slightly left to right for the perfect shot, all the while making silly faces.

After about 20 shots, Dodd is happy with the outcome. “I want the dumb eye rolling,” Dodd says of the reaction he’s hoping to get from the photo. “It’s something that anyone can see and laugh. Even if they’re only laughing at the image for face value, and the fact that it says rocket garden and it’s a guy gardening, hopefully it get them to think, even for a half second, ‘Oh, rockets!'”

The next shoot is inside the Visitor Complex’s Atlantis exhibit, where the Shuttle is on display. As Dodd and Seemangel try to set up the shot, they’re interrupted by visitors at the exhibit. He takes selfies with the onlookers and gives them stickers.

“Normally I feel so ostracized when wearing the suit in public,” Dodd said, “but here, this is the most normal I’ve ever felt in a space suit.”

He’s not alone today. A young girl is walking around the Atlantis exhibit wearing a bright orange space suit costume, too. Dodd walks up to her. At first, he startles her, but then she smiles. Dodd asked to take a photo with her. “My day is made. This is fantastic,” he said.

There’s still one more shot Dodd wants to get. He wants to somehow capture the scale of the giant Atlas V rocket, the rocket that took humans to the moon. It’s more than 350 feet long and 30 feet in diameter. “Pictures don’t do it justice,” said Dodd. “You’ve got to see it with your own eyes.”

Dodd still hopes to capture the scale and size of this massive rocket for those that can’t see it in person. “It’s my duty,” Dodd says proudly. “I try and figure out ways to come up with new angles to convey the size of this hardware.”

Dodd’s photography is unique to aerospace photography, which is something Michelle Hansen appreciates when it comes to telling the story of human spaceflight. She’s the Social Media and Content Specialist at the Kennedy Space Center Visitor’s Complex.

“The story can be told in multiple ways,” says Hansen. “The way that he’s telling it, NASA embraces it. He’s doing a great job, his enthusiasm is clear from what he has chosen to do and from his visit today.”

The Everyday Astronaut’s photos receive about 50,000 views each, with a handful hitting almost 1,000,000 each.