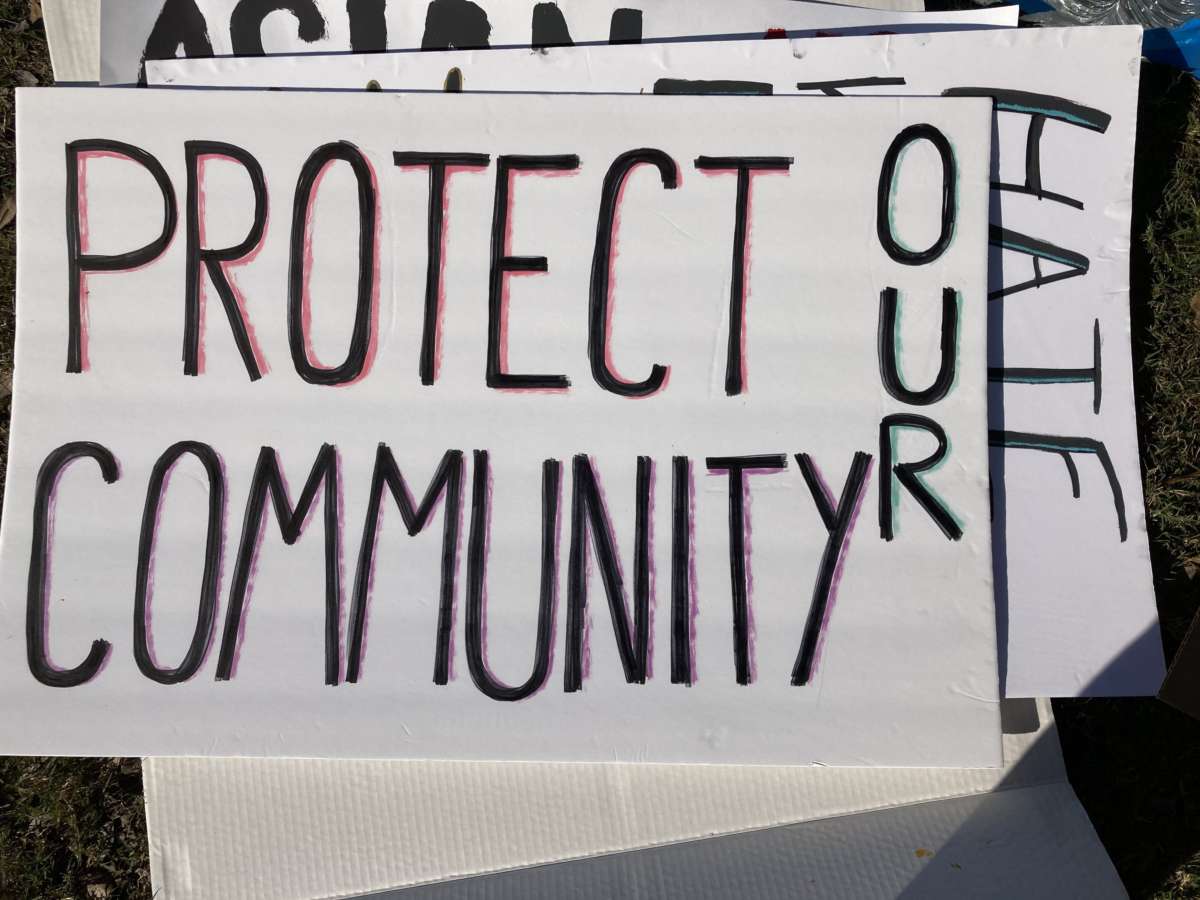 A sign at the UCF vigil honoring the Atlanta mass shooting victims. / Photo by: Danielle Prieur.

When the pandemic started, Justin Le was scared to let his grandparents go out alone. Not just because they could get sick, but because he was afraid they could be hurt.

The 16-year-old Timber Creek High School sophomore said he would go out to get their groceries and run their errands, terrified that the elderly Vietnamese couple would encounter discrimination and hate.

Having dealt with other forms of discrimination himself throughout his school life, the first generation student didn’t want what he was hearing about in his community and seeing on the news to reach his family.

Le is not alone. Thousands of people in the Asian American and Pacific Islander community, or AAPI, across the country have been protesting the hateful rhetoric of the racialization of the COVID-19 pandemic since its beginning.

In February, the Center for the Study of Hate and Extremism at California State University, San Bernardino, reported a rise in anti-Asian hate crimes in the U.S. According to the study, anti-Asian hate crime in 16 of America’s largest cities increased 149% in 2020. The surge in hate crimes correlated with a spike in web searches for racist terms for the novel coronavirus. The data inspired the #StopAsianHate social awareness and justice movement that has been trending on social media.

Bar graph showing the sharp rise of anti-Asian hate crimes incidents reported to authorities in select U.S. cities from 2019 through 2020. / Photo credit: Center for the Study of Hate and Extremism.

While the report did not mention cities in Florida, the horrific events in Atlanta last week have prompted members of the Asian American community in Orlando to speak out.

On March 16, a white American man committed a series of mass shootings at three massage parlors in the city of Atlanta. Of the eight people killed, six were women of Asian descent. An investigation revealed the gunman was headed to the Sunshine State next.

A grieving community held a vigil on Tuesday evening at University of Central Florida honoring the victims. Le said that while solidarity in mourning is meaningful, it is also time to take action.

As Florida chapter leader for Teens United, a national non-profit organization run by teenagers who want to serve their communities, Le is organizing a protest rally in downtown Orlando on Sunday. He’s also reaching out to other minority and AAPI groups for support like the UCF Asian Student Association (ASA) and the UCF Asian Pacific American Coalition (APAC).

“Just as we grieved, just as we host spaces for vigils, there’s also spaces for action, and there is also space for us to really show that this is not going to be same generation that were forced into silence,” APAC President Adrian Lee said.

The 21-year-old international and global studies junior said she expects to see organizations all across Florida demonstrating their support.  She said it speaks to a new generation of outspoken AAPI Americans who will not allow themselves to be stereotyped as “quiet” and “subservient.”

Le said the best thing allies and people outside the community can do right now to help is to stand in solidarity and show up at these events, although he understands the risks that come with protest, especially during times of pandemic.

“Some people don’t know that we are getting hate,” Le said. “I really do advocate people going to these protests because it is helping bring awareness to the Asian American community.”

Le also invites people outside the community to look within themselves and explore their own prejudices. He said many Americans who hold biases against AAPI people also engage in cultural appropriation and enjoy AAPI culture like their style, art, and food.

In school, he said he has endured the stereotype that Asian people are supposed to be smart, something he said has affected him both socially and academically.

“People do really expect us to achieve higher than the average,” Le said. “They assume we’ll be successful and have nothing to worry about, and they don’t think of us as people of color for that reason.”

ASA President Duc-Thanh Nguyen, who is of Vietnamese descent, said one of the biggest harms with AAPI stereotypes is the “model minority myth,” an idea that proposes AAPI people are an exemplar minority – successful, smart, and hard working.

He said it is not only dehumanizing and overlooks individual effort but also inadvertently alienates AAPI groups from other people of color.

“With white supremacy you see that nearly all minority groups have been pitted against one another to win this sort of favor that they have a place within society,” Nguyen said. “The rhetoric of a ‘model minority’ makes it very difficult to reach to other minority groups to kind of bridge the gap in terms of shared struggles.”

Nguyen, who called for the amplification of AAPI voices, said that while he can’t speak to the experiences of all AAPI people, he and Lee agree the myth extends across the conversation and needs to be demystified.

Lee said the model minority myth essentially says that because AAPI people statistically tend to enjoy higher economic status, financial stability, or educational attainment, that it is possible for every other minority group to achieve the same. It attributes their success to their cultural values without taking into account a very nuanced set of factors to support supremacist talking points.

“That fits a narrative, right? It fits that American story that you can pull yourself up by your bootstraps, there is no excuse as to why you’re not successful, you can achieve the American dream if you work hard enough,” Lee said. “It critically overlooks the way that systematically Black and Brown communities have been put at a disadvantage.”

Lee cited the model minority myth overlooks issues like redlining and other structural barriers, like the lack of access to good schools or voting precincts, that have kept Black and Brown communities behind but have not historically applied in the case of AAPI peoples.

“We have benefited so much from our adjacency to whiteness by being able to just join and fall into standards of professionalism or biting back your tongue when discrimination is happening,” Lee said. “We have, in a sense, left behind other communities of color, and that’s on us to realize what we have done, but also to take the time to heal.”

Lee said the model minority myth is also responsible for the myth of silence among the AAPI community, and that these serve not only to divide but to provide a convenient narrative that enables victim blaming.

“A lot of the way that we perceive Asian Americans is that they are silent and that they endure their suffering rather than speak aloud, and while that may be truer for the older community, for the first generation immigrants, it undermines the people in our community who have been vocal and have been fighting since the very beginning,” Lee said. “But it is a convenient narrative that the media and those in power use to imply that the Asian American community has brought this on themselves for not speaking out or reporting incidents.”

While the Orlando Police Department and Orange County Sheriff’s Office both said that there have been no reports of increased violence against AAPI people, according to the the Stop AAPI Hate report, most discrimination cases have been verbal assault and online harassment.

The movement to #StopAsianHate is not just about hate crimes but also meant to dispel harmful stigmas and open a conversation on what AAPI people have been going through for decades. Lee said this includes the problem with the fetishization of AAPI women.

“No one took us seriously when we said that the hypersexualization of Asian American women or that their exoticization would lead to harm and has already been doing harm,” Lee said. “Our narrative just hasn’t been accessible. People still choose to ignore it and look at their own reality and just choose their own world.

“Younger generations will not take this sitting down,” she said. “We have been fighting and, in fact, it’s really just frustrating that it took this tragedy to have this focus put onto us and basically be provided a platform now.”

Signs at the UCF vigil honoring the victims of the March 16 mass shooting in Atlanta. / Photo credit: Danielle Prieur.

Lee, Nguyen and Le agree that the popular vision of AAPI Americans is influenced by white supremacist values that serve to perpetuate the status quo and keep minorities oppressed.

The young leaders each also pointed out that AAPI activists marched with the Black Lives Movement, and they say that the last year has shown that it is time for unity.

“This is a very nuanced conversation, and it’s going to get uncomfortable, but we need to embrace the discomfort together, and it doesn’t have to be that difficult. It’s up to all of us,” she said. “If it doesn’t happen now, it won’t happen again.”

Teen United’s rally against anti-Asian hate is being held outside the Walgreens at Colonial Plaza Mall, 2420 E. Colonial Drive, in downtown Orlando. It starts at 11 a.m. on Sunday.