‘You Only Get One Life In This World’: Voices From Houston’s Convention Center 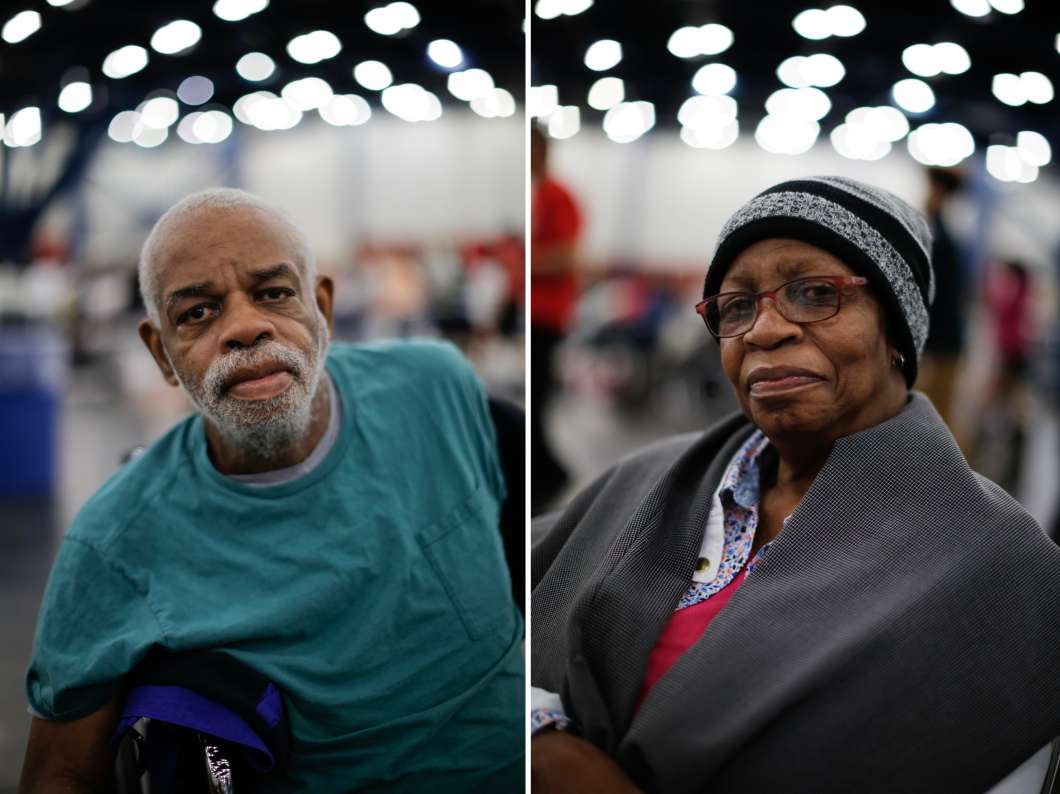 Dannie Harris and his sister Betty Shaw arrived at the convention center on Monday night. "When it first started the water rose and went down twice," Betty says of the water in their home. "So we thought maybe it was gonna stop. I started sweeping up." Dannie said "[Hurricane] Ike had just gone through." After they realized it wasn't going to subside they called for help.
Image credit: Ryan Kellman

Erica Brown called 911 for two days before a helicopter finally spotted her, trapped in her Houston home with her 7-month-old son and three other children. Sometimes when she called, she got nothing, just a busy signal and a disconnection. Multiple times she was told that they’d try to send help. Hours would go by with no rescue.

The family spent two nights in their trailer watching the floodwaters from Tropical Storm Harvey rise up the foundation. “It was a hard feeling because I thought me and my kids were going to lose our life in this hurricane disaster.”

On Tuesday around 11 a.m., a rescue team finally came.

“The helicopter came over my house and I heard him, and he saw me waving the white shirt. And he came on down and he got us in the basket and pulled us up,” says Brown, 29. They had to go two-by-two in the basket. She sent her two oldest girls, a third-grader and a first-grader, up first with a small suitcase of clothes.

When the basket came back down, she lifted her kindergartner in ahead of her and then carried her infant son. It was still raining.

Brown and her family are now among the estimated 9,000 people at the downtown George R. Brown Convention Center, where officials said they had been expecting about 5,000. Outside on Tuesday, the scene is chaotic, with police, Red Cross volunteers and National Guard members patting people down, directing traffic and trying to help new arrivals and people dropping off donations.

Inside, families have spread out their soaked belongings to dry. There are long lines for food. A play area for kids is now a place for people to sleep, as space has become more tight in the past 24 hours.

Brown says the kids got fresh clothes at the convention center. Overnight, they slept on cardboard and army blankets on the floor, but on Tuesday morning an air mattress arrived. “They were very nice to us. It’s helpful for now until everything clears over,” she says.

“I was scared for our life,” Brown says. She says she found out on Monday that a friend died in the flooding over the weekend.

Another woman at the convention center, Michelle LaVan, 49, says she escaped her flooded home with seven family members.

They wanted to evacuate to a shelter beginning on Sunday, when their street flooded, but they couldn’t get through to emergency responders to help them. By midday Monday, they decided they needed to leave, or risk drowning in their four-bedroom apartment. They loaded suitcases with extra clothes and walked out into waist-deep water, yelling after a passing Coast Guard rescue boat.

“Someone flagged them down, said, ‘Hey, no no, stop! [There are] kids!'” LaVan recalls. The boat took them to a dump truck that took them to a parking lot where a private citizen drove them in the back of his pickup to the convention center.

Now she’s worried about what comes next. “Hopefully it stops raining tomorrow,” she says. “I know the water will go down in my subdivision if the rain stops.”

Her niece, 11-year-old Journey Booker, says the evacuation was mostly scary but a little bit fun. “All the water,” she says, smiling. “It looked like I just walked out of a bath after getting too much mud!” But it’s hard, knowing some of her friends and family are still in flooded homes, and that her middle school is flooded. Booker likes school, and she was excited to start sixth grade on Monday.

“I was excited. I was supposed to start yesterday, but Hurricane Harvey had a change of plans,” she says, sitting under a Red Cross blanket on the floor of the convention center.

Nearby, volunteer Emma Jones, 27, is handing out markers and paper to kids, and watching children while exhausted parents get food or use the bathroom. Jones is a social worker who works in crisis mental health at an outpatient clinic at UT Health in Houston.

“I think I wasn’t expecting this many people to be here. Especially yesterday, there weren’t as many people,” Jones says. She says she’s talked to many people who don’t have their usual psychiatric medications and are struggling to handle the trauma of the storm.

“As I walk around, I’m hearing a lot of people saying ‘I don’t have my medications for bipolar disorder or schizophrenia for the first time.’ So we have these people who have this extreme experience, and also don’t have the medications they need for mood regulation,” she says.

Emergency officials have asked social workers and other mental health professionals to help as they can at shelters.

For those waiting out the rain at the convention center, many say they are just thankful to have a dry place to stay but are anxious for the future.

“It’s not a joke,” Brown says. “You only get one life in this world, so I’m glad we’re safe and sound now. But we have to start all over again.”