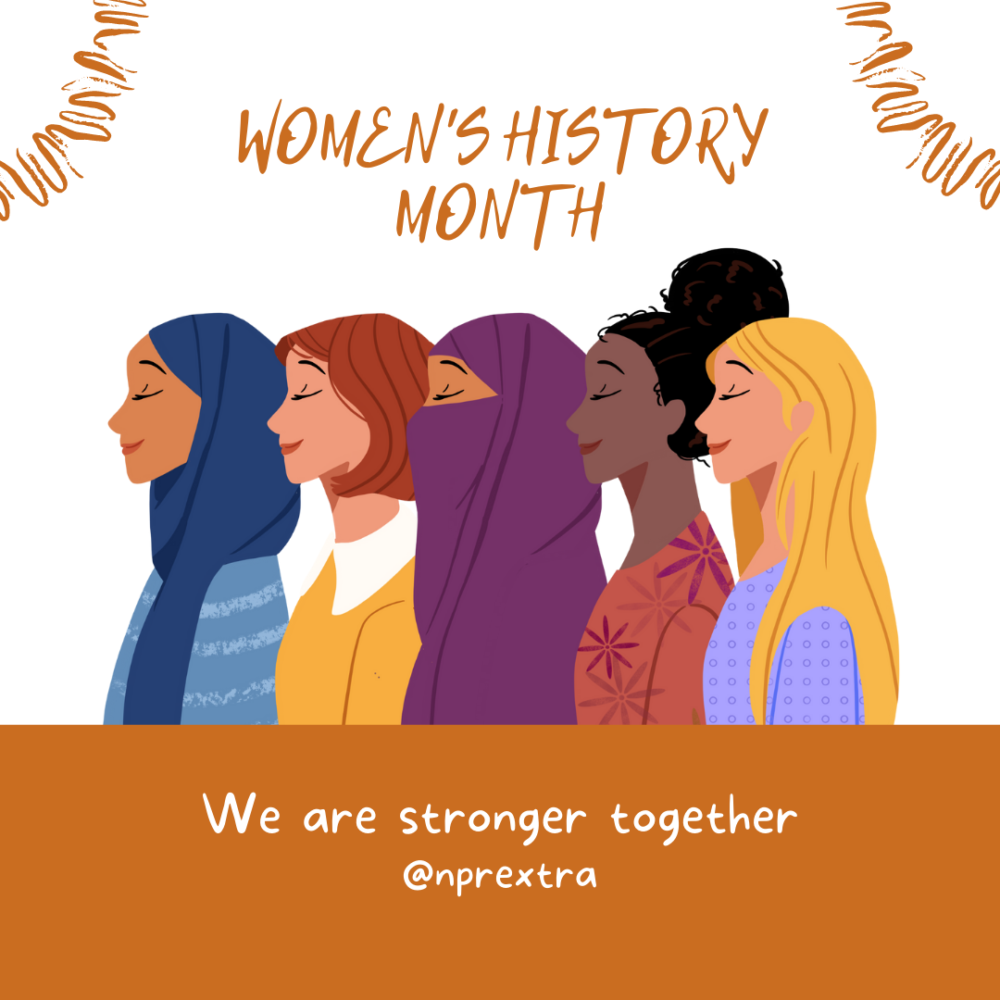 Before we list all the amazing things NPR has planned for March, we want to highlight our Founding Mothers: Linda Wertheimer, Susan Stamberg, Nina Totenberg and Cokie Roberts. We are very thankful to them for their contributions and for paving the way!

NPR is celebrating womxn and their heritage through NPR Podcasts, NPR Music and special events and coverage from our Member stations. Check out our programming below:

Mabel Fairbanks: Ice Breaker: Figure skating has always been about flair and drama. But what happens on the ice is nothing compared to what goes on behind the scenes. This week, with the help of our friends at the Blind Landings podcast, we’re telling the story of Mabel Fairbanks. Fairbanks was a Black and Seminole figure skater who spent her career training figure skaters of color — while navigating the complicated racial and social dynamics that characterized the sport.

Women of the Civil Rights Movement (3/30): For the end of women’s history month, we’ll be airing this episode featuring the voices of women of the civil rights movement, composed primarily of archival tape where the women talk through how they thought about their role and their activism.

Two part episode on physicist Chien-Shiung Wu (3/10-3/11): Dr. Chien-Shiung Wu was a Chinese physicist whose work changed a fundamental principle of the field. She worked in the U.S. but is almost unknown in this country – though is considered nuclear physics royalty in China and science inspiration to countless women and girls. On Thursday, Mar 10, Emily Kwong talks to Scientist-In-Residence Regina Barber about Wu’s seminal work. On Friday, Mar 11, Emily interviews Jada Yuan, Dr. Wu’s granddaughter, about the woman behind the work.

Our Own People (3/17): A Japanese American activist whose early political awakenings came while incarcerated in the concentration camps of World War II America, Kochiyama dedicated her life to social justice and liberation movements. As hate crimes against Asian American Pacific Islanders surge, Throughline reflects on Yuri Kochiyama’s ideas around the Asian American struggle, and what solidarity and intersectionality can mean for all struggles.

Overview: In March, to celebrate Women’s History Month, Turning the Tables will publish a podcast series centered on our “Records That Changed Our Lives” series. In 2021, we published 12 essays by women and non-binary writers, in which they each wrote about one record by a woman musician that changed their life. These albums ranged in genre, era and style – from celebrated classics like Tracy Chapman’s self-titled debut and The Miseducation of Lauryn Hill to subcultural gamechangers, like the twee pop of Tiger Trap and the ambitious underground rap of bbymutha. The essays in this series capture the albums’ artistic and cultural interventions, and the personal revelations they sparked for our writers. Each podcast in our new series will match up two of the writers from the 2021 series to discuss their essays, the records they’re focused on, and how we make decisions about the most important music in our lives. The podcast series will run in the All Songs Considered feed, publishing on Wednesdays. There will be five episodes in total, hosted by Ann Powers and Marissa Lorusso and produced by Suraya Mohamed.

NPR Music’s Ann Powers and Marissa Lorusso discuss the “Records That Changed Our Lives” series, what it means to make a personal canon, and their essays on Kate Bush’s The Dreaming and Yoko Ono’s Plastic Ono Band

Guests Dawnie Walton (author of The Final Revival of Opal & Nev; former deputy managing editor, Essence) and Christina Lee (NPR Music contributor; co-host of Bottom of the Map) discuss what it means to find success on your own terms, and their essays on Santigold’s Santigold and bbymutha’s Muthaland.

Guests Maria Sherman (author of Larger Than Life: A History of Boy Bands from NKOTB to BTS; NPR Music contributor) and Laura Snapes (deputy music editor, The Guardian) discuss developing your taste as a critic, carving your own path, and their essays on Tiger Trap’s Tiger Trap and PJ Harvey’s Uh Huh Her.

For this years Women’s History Month, Jazz Night in America is proud to present a new installment of our “Crate Digging” series featuring a super rare, unearthed 1991 concert from balladeer, pianist, and vocalist Shirley Horn! The rest of March programming will feature rebroadcasts of women spanning generations and styles in jazz and blues. The final Thursday of the month (3/31), we’ll shift into our annual April / NEA Jazz Masters coverage with a rebroadcast of our episode profiling 2010 NEA Jazz Master: Cedar Walton.

When René Marie takes the stage, she’s on a mission to help people feel more vulnerable and less afraid. In our latest radio episode, we’ll hear original music from René’s quintet recorded last year at Jazz at Lincoln Center. We’ll spend time with the vocalist and songwriter to hear the stories behind those songs and how she couldn’t keep from singing.

Shirley Horn’s mastery lies in her use of her voice in perfect tandem with the piano, similar to giants like Nat King Cole and Fats Waller. Her expression is in the pure art of anticipation, pause, and release – all sublimely exhibited in a 1991 gem uncovered from Jazz at Lincoln Center’s archives, which also features special guests Wynton Marsalis, Branford Marsalis, and Toots Thielemans.

Shemekia Copeland has spent a career performing socially conscious blues with dashes of rock, folk, country, and Americana. This week’s radio episode features backstories of her songs and connects her artistry to blues icons from Ruth Brown to Ma Rainey.

Bassist Endea Owens Cooks Up Jazz for the Community [REPEAT]

We hear the young bassist Endea Owens with Wynton Marsalis, Jon Batiste and trace her Detroit roots to learn how she’s giving back to her community with free meals and free concerts on the street.

Femme Fridays: In honor of Women’s History Month, the ladies of WKMS are taking to the airwaves from 11 to noon every Friday in March. There will be sets from female artists celebrating women, short interviews with women of all ages from the region and general female comradery and empowering others. Join Melanie A. Davis, Jenni Todd, Dixie Lynn, Asia Burnett & Catie Bates-Robertson for this musical journey. Hope you can tune in!

March 8: WUOL will once again celebrate International Women’s Day with a playlist featuring the music in our library by women throughout history. In addition, at 10am and 10pm join us for Her Music/Her Story, a two-hour special for the occasion.