With So Many Obamacare Repeal Options In Play, Confusion Reigns 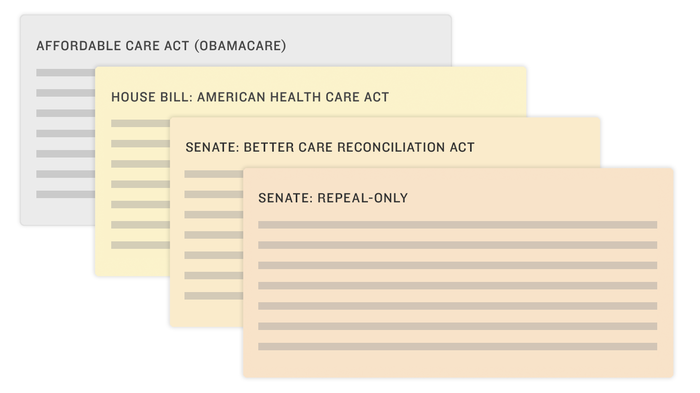 On Thursday, the Senate unleashed yet another iteration of its effort to repeal and replace the Affordable Care Act, also known as Obamacare, and with it came another analysis from the nonpartisan Congressional Budget Office. If your head is spinning, you’ve got plenty of company, us here at Shots included.

Here are the key versions of repeal and/or replace legislation so far this year:

The American Health Care Act, the House bill passed on May 4. The Senate chose to write its own bill rather than amend this House version.

The Obamacare Repeal Reconciliation Act, ORRA, a repeal-only bill that would phase out the exchanges, subsidies, taxes and Medicaid expansion over two years. It’s modeled on the 2015 bill that made it to President Barack Obama’s desk, which he vetoed.

And here’s what’s next: Senate leaders say they want to start debate on a bill next week, but it is not clear which legislation might be destined for the Senate floor.

The two most likely options for consideration right now are the latest BCRA and the ORRA. Both pieces of legislation have met with opposition, but Senate Majority Leader Mitch McConnell is trying to persuade those holdouts to change their mind and vote to bring legislation to the floor. His argument is that the Senate needs to begin debating and amending a bill in order to pass one. (Note: Republicans have held no hearings on the bills, where a lot of debate would have already occurred).

Holdouts could stay opposed, and efforts to move a bill to the floor could continue to go nowhere.

But if one of those bills does make it to the floor, there is no way to predict what the final bill will look like.

Any senator can offer amendments, and this is where the Cruz amendment could return, as could any others. It’s called a vote-a-rama.

A few other proposals may come up during this process: On Jan. 23, Sens. Susan Collins, R-Maine, and Bill Cassidy, R-La., introduced a bill that lets states keep the ACA if they would like to. On July 13, Cassidy and Sen. Lindsey Graham, R-S.C., announced an amendment that would give states a block grant to decide how to spend vis-à-vis the Affordable Care Act. It did not include any changes to Medicaid. And even the way the repeal-only bill may be considered (because it’s from 2015) is by getting the House’s bill to the floor and then amending to swap all its language for that of the repeal-only bill.

The vote-a-rama usually ends with an amendment by the leader that cleans it all up and kicks out any offending provisions.

Skeptical lawmakers may not want to go this route, because it could easily end with them getting pressured to vote for a bill unlike anything they’ve yet considered and one they may not be happy with.