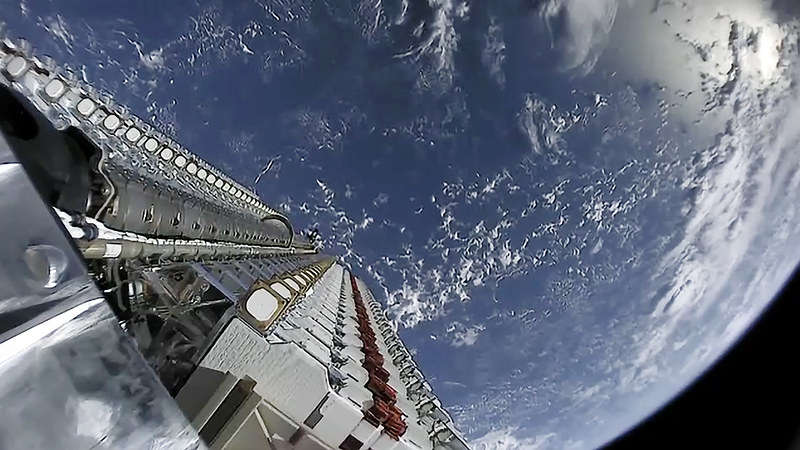 SpaceX is set to launch another batch of its internet satellites from Cape Canaveral Wednesday evening. The launch comes just days after SpaceX successfully launched two astronauts to the International Space Station onboard a Crew Dragon capsule.

It will be the eighth launch for SpaceX’s Starlink constellation — the commercial company’s effort to blanket the globe with thousands of tiny satellites to provide broadband internet worldwide.

A batch of 60 Starlink satellites will ride to space on SpaceX’s Falcon 9 rocket. The company routinely lands and refurbishes rockets to reuse, lowering the cost of launches. This rocket has flown on four previous missions.

The hundreds of Starlink satellites already in orbit have garnered criticism from astronomers since the satellites show up as tiny dots in astronomical images.

SpaceX is launching an experimental visor to help reduce visibility of its Starlink satellites. Photo: SpaceX

During sunrise and sunset, some light is reflected off parts of the satellite which can be seen from the ground. These “trains” of dots traverse the sky and can impede long-duration images of the night sky taken by astronomers.

On this launch, SpaceX will test an experimental visitor on the satellite to help block sunlight and reduce reflections — aiming to mitigate interference with ground-based telescopes.

“The visor prevents light from reflecting off of the diffuse antennas by blocking the light from reaching the antennas altogether,” said SpaceX. The company said starting in June, all satellites launched into orbit will have the visors.

SpaceX also works with satellite tracking services to provide astronomers locations and times of possible interference. The company is also changing the way the satellites fly, aiming to prevent additional reflection off the solar arrays.

The next launch of 60 Starlink satellites is scheduled for Wednesday at 9:25 p.m. The 45th Space Wing forecasts a 70 percent chance for favorable weather. A backup opportunity is available on Thursday, June 4 at 9:03 p.m.