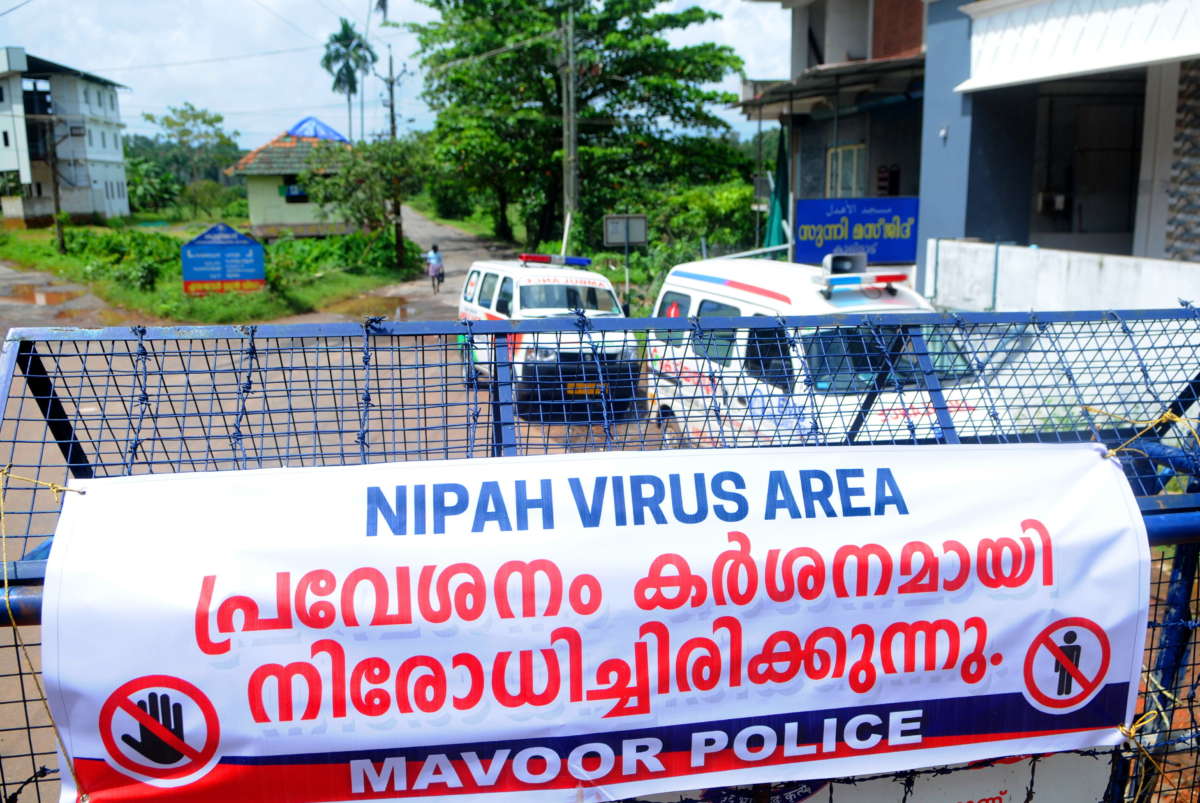 A road blockade set up during the Nipah virus outbreak in India this month.
Image credit: C. K Thanseer

In 2018, we reported how the South Indian state of Kerala beat back the deadly Nipah virus. Local filmmakers and musicians even made a celebratory music video about it. Three years later, the state is faced with yet a new case of Nipah — its third outbreak since 2018 — and it couldn’t have come at a worse time. Kerala, known for its palm-lined beaches on the Arabian Sea, is still reeling after a caseload of 4 million COVID infections since the pandemic began.

The Nipah virus is making news again after tragic reports that a 12-year-old boy died of the disease on Sept. 5, in Kerala’s Kozhikode district. He had been admitted to a private hospital after running a high fever and showing symptoms of encephalitis — swelling of the brain.

While figuring out how to prevent and treat the Nipah virus is very much a work in progress, there have been advances.

Nonetheless, Nipah remains a concern, not just in India but for the entire planet. The World Health Organization classifies it as a “virus of concern” for future epidemics because “each year it spills over from its animal reservoir into humans,” says Dr. Stephen Luby, professor of infectious disease at Stanford University. And when humans are infected it can be transmitted from person-to-person.

But the virus is not as transmissible as some other viruses. “There are occasional Nipah superspreaders who infect a lot of people,” says Luby. “But the average transmission rate is less than one person per infection.

“However, each time a person is infected, the virus is in an environment that selects for human adaptation and transmissibility. The risk is that a new strain that is more efficiently transmitted person-to-person could generate a devastating outbreak. Indeed, since 70% of people who are infected with Nipah virus die, such a strain could represent the worst pandemic humanity has ever faced.”

That’s why, he says, it’s important to “continue to invest in strategies to reduce the risk of spillover and to develop countermeasures across a range of high-risk pathogens.”

Following the boy’s death, public health authorities swung into action, contact tracing friends, family and health workers. They identified and isolated 251 people, including 30 close family members. Eleven samples from those in close contact with the boy were sent for testing, and on Aug. 8; they were negative. But how this child contracted Nipah is still unclear.

“It’s really difficult to establish the cause of the boy’s illness,” says Dr. Thekkumkara Surendran Anish, associate professor of community medicine at the Government Medical College in Thiruvananthapuram. “The infected patient was just too sick to tell us anything about what he ate or did. That’s why it’s all speculation.”

In the two strains of Nipah encountered so far — originating in Malaysia in 1999 and later in Bangladesh — pigs and fruit bats are believed to be the intermediary hosts. “One plausible theory is that those who’ve been infected [in Kerala] ate food or fruit contaminated with bat saliva or excreta,” says Anish.

When reports emerged that the boy could have possibly contracted Nipah from eating the rambutan — a tropical fruit with thick red spines resembling lychee that grew around his home — sales of the fruit plunged in Kerala. But the fear that the fruit is the cause of the disease is pure speculation and without evidence, experts say.

By contrast, information about the route of virus’ spread has been established in prior outbreaks. In strains of Nipah originating in Malaysia in 1999 and later in Bangladesh, pigs and fruit bats are believed to be the intermediary hosts, says Anish.

“We have a very clear understanding of how Nipah virus moves from fruit bats into people,” says Luby. “Bats are attracted to raw date palm sap that is harvested during the wintertime. When people drink raw date palm sap that has been contaminated by bats, they are at risk of contracting Nipah.” The World Health Organization calls the drink a “likely source” of outbreaks in humans in India and Bangladesh.

While it is possible to recover, the virus has a high fatality rate.

In 2018, when Nipah emerged for the first time in Kerala, only two of the 19 infected people survived. When it was detected again in 2019, a 23-year-old man was infected, but swift isolation ensured the virus did not spread to others in his community. The patient survived.

“[With] COVID, you are most infectious before the symptoms set in,” says Anish. “Once they do, your ability to infect other people wanes. But that’s not the case with Nipah. When the symptoms set in, you start spreading the virus.” In areas more prone to Nipah infections (Bangladesh, Malaysia, India, and Singapore) being aware of this can help, he says.

After the current case was identified, COVID precautions have helped control the spread of Nipah in Kerala, says Dr. K Puthiyaveettil Aravindan, a former professor of pathology at the Government Kozhikode Medical College. “Hospital workers were already kitted out in full protective equipment. People were masked.” Since the virus is spread from human-to-human through bodily fluids, physical distancing and masking helped.

The virus is not, however, as transmissible as some other viruses. “There are occasional Nipah superspreaders who infect a lot of people,” says Luby. “But the average transmission rate is less than one person per infection.”

Hopes for treatment and a vaccine

With all the concerns about Nipah, efforts to develop a vaccine are ongoing. “There are several promising Nipah virus [vaccine] candidates that have demonstrated high efficacy in animals,” says Luby. In addition, CEPI, the Coalition for Epidemic Preparedness Innovations, is supporting human trials of multiple vaccine candidates.

One study on vaccines, a pre-print, focused on the effectiveness of ChAdOx1 — a multipurpose vaccine vector which can be customized to carry DNA from a wide variety of pathogens. In a trial on African green monkeys, it proved effective when tailored against the Nipah virus.

While the vaccine is still in clinical trials, there’s also a non-patented drug called M 102.4 developed by Christopher C. Broder, a professor of immunology and microbiology at Uniformed Services University of the Health Sciences. It’s a monoclonal antibody that can attach to proteins in a virus and render it ineffective.

“Suppose you get a massive dose of a virus in your body. It’s a matter of time before the pathological process begins and it damages your cells,” says Anish. “You don’t have time to depend on the immune reaction generated by a vaccine at that point. In this narrow window [before you develop symptoms], you can use an agent that can neutralize the virus.”

During Kerala’s 2018 outbreak, M 102.4 was flown in from Queensland, Australia for use on an emergency basis. At the time, it had not been tested on humans. Since then, initial tests in humans have been successful. In a study published by The Lancet, Phase I clinical trials in humans have shown the drug can neutralize Nipah.

In case of any major outbreak, health authorities in Kerala and elsewhere now can use the antibody to get it under control, says Aravindan.

A virus on the move

It’s likely that other Indian states may be affected, too. “Kerala can’t be the only hot spot” says Aravindan. “It’s possible that the health system in other states may not be catching these infections at all.”

He also has concerns about future spread. Genetic changes in the virus are likely, making hosts out of new species of bats and making the virus more transmissible among humans, he says. He adds that Nipah could emerge as a global problem similar to COVID due to international trade, global travel and climate change that causes bats to seek new habitats.

For those reasons, he says, it’s imperative “to analyze which species [of bats] could be infected, the places they’re located” and whether there might be additional intermediary host animals.

For now, the Nipah virus scare in Kerala seems to be under control. But “as long as there’s a lot we don’t know, the possibility of an epidemic can’t be ruled out,” Anish says.