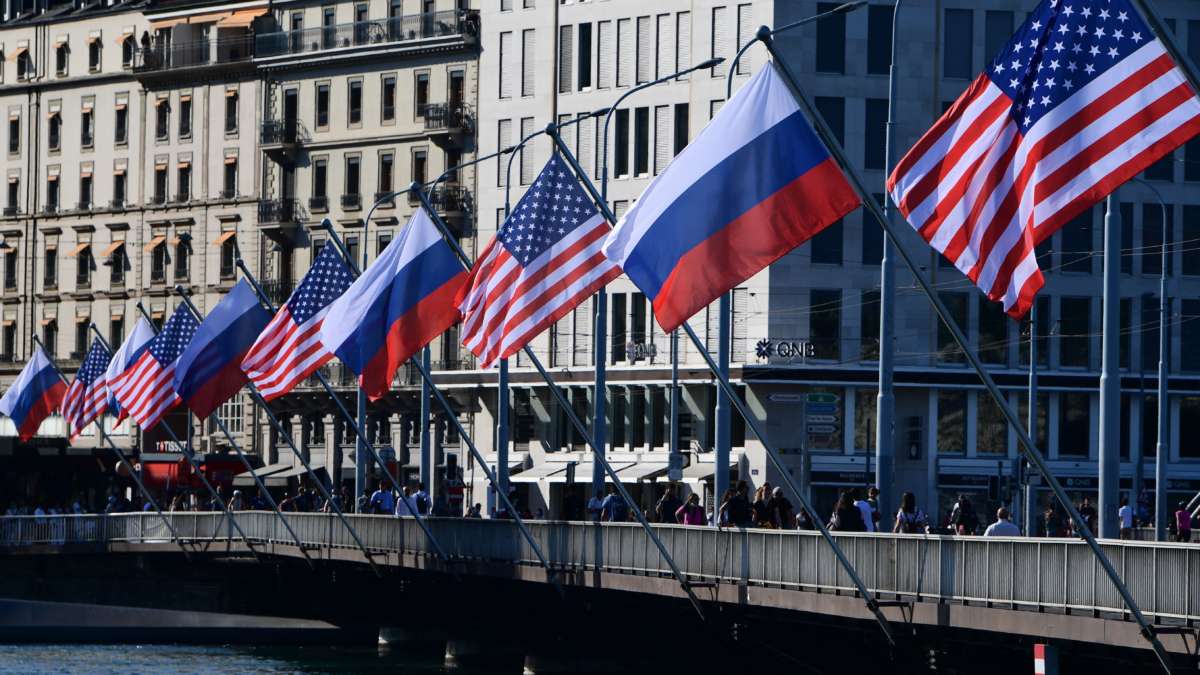 U.S. and Russian flags fly on the Mont-Blanc bridge on the eve of a US-Russia summit on Tuesday in Geneva. A former intelligence operative says agencies are in high gear.
Image credit: Sebastien Bozon

Intelligence agents from the U.S. and Russia are out in force as President Biden prepares to meet with Russian President Vladimir Putin on Wednesday, says Daniel Hoffman. Hoffman served as CIA station chief in Moscow for five years, and had assignments elsewhere in Europe, the Middle East and South Asia.

Knowing what the other side wants and is willing to concede is crucial in any tough discussion. On the U.S. side, Hoffman says now is the time that the State Department, intelligence agencies and the Defense Department are in “high gear” to prepare Biden as much as possible for what Putin might say.

And it’s not just the U.S. and Russia, he says. “There are many countries watching very, very closely what might be happening in Geneva. China would be certainly high on that list as well, NATO members, our allies, our partners and our adversaries as well.”

Hoffman talked with All Things Considered about what agents are hoping to learn and what the meeting means for recruitment. Highlights contain extended web-only answers.

As someone who supported a number of big U.S. summits in the past, what are the intelligence officers here trying to learn?

I think the goal is to learn Vladimir Putin’s talking points. That would be a high priority. For example, Vladimir Putin is holding U.S. citizens: Trevor Reed, Paul Whelan. What might Vladimir Putin be interested in leveraging, what might he want in return for releasing those American citizens being held hostage?

What are Vladimir Putin’s talking points on the Havana syndrome, which we highly suspect Russia is responsible for? And then all of the other issues where we are in absolute confrontation, like Russia’s use of banned chemical weapons against their own citizens and Sergei Skripal in the U.K.

And the ransomware attacks in the United States, the Kremlin is at the very least allowing cyberhacking groups to homestead on their territory. Does Vladimir Putin know that they’re mounting attacks against the United States? Is the Kremlin ordering them? Those would be some of the questions, I think, that President Biden would be asking of the intelligence community.

How do you rate the chances of hotel rooms here in Geneva, meeting rooms at the summit being bugged?

All I can tell you is that I always assumed that hotel rooms had listening devices in them. Whether they did or they didn’t is something that we may never know. But I think that it’s something that all leaders, whether the Russian side or our side, have to factor into their planning. It’s hard to have a real conversation without taking extra measures to prevent the other side from listening to what you’re saying. That’s a fairly age-old challenge that we faced.

Does a summit like this also represent a recruitment opportunity?

It’s very clear [to] the United States and Russia that the relationship is extraordinarily complicated and confrontational, and that always presents opportunities for the United States to mount recruitment operations. And it’s also high on our list of priorities, frankly, because what happens in Russia is behind — maybe not necessarily always an Iron Curtain anymore, but a cyber curtain.

We need to determine exactly what cloak and dagger espionage operations the KGB operative in the Kremlin, Vladimir Putin, is planning against us, so we can detect them and then preempt them before they’re visited on our shores. We failed to do that with SolarWinds and DarkSide, among other things, including election interference. And so it puts a premium on our intelligence services to mount really a full court press. And on the other side, Russians who might be thinking about working for the United States understand the value to the United States of this protected information.