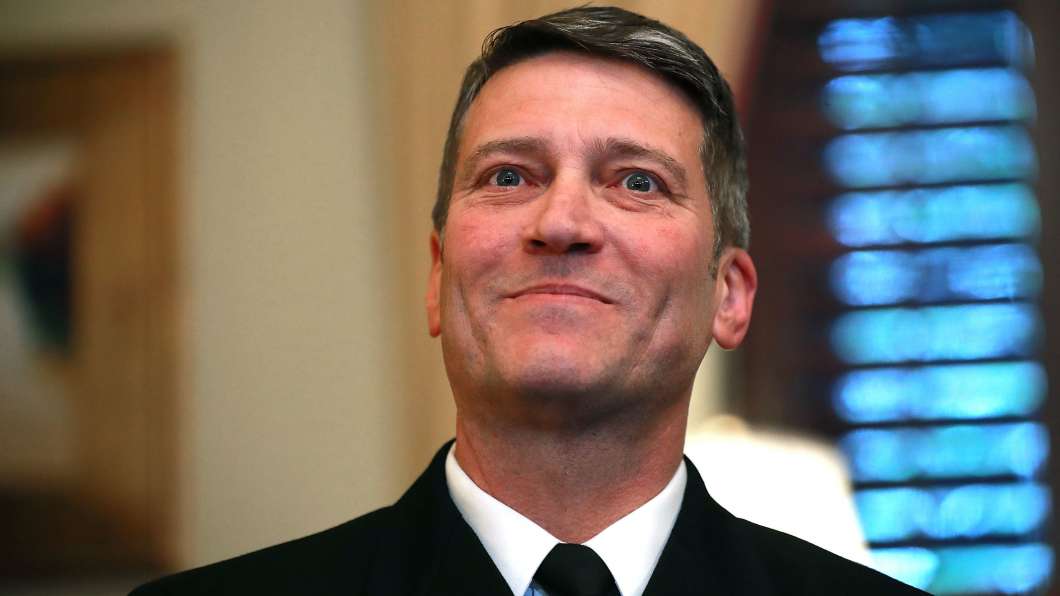 The White House is defending President Trump’s choice to head the Department of Veterans Affairs, even as questions swirl around the nominee, White House physician Dr. Ronny Jackson.

“Dr. Jackson deserves a fair hearing and we are not going to write him off in any way before his hearing, and quite frankly neither should members of Congress,” White House spokesman Hogan Gidley told Rachel Martin on NPR’s Morning Edition Wednesday.

Gidley said the FBI background investigation into Jackson “was clean and there are no issues in the background check whatsoever.”

His confirmation hearing, originally scheduled for Wednesday, was indefinitely postponed. And even as Trump defended his nominee, he suggested Jackson might prefer to withdraw.

“What do you need it for?” Trump said he told Jackson Tuesday. “I don’t want to put a man through a process like this. It’s too ugly and too disgusting.”

Jackson, a Navy admiral who has served as personal physician to both Trump and former President Obama, was already facing tough questions about whether he had the managerial experience to lead the VA.

Then, late last week, complaints surfaced about Jackson being drunk on duty during foreign trips and overseeing a hostile work environment in the White House medical unit, according to Sen. John Tester, D-Mont., the ranking Democrat on the Senate Committee on Veterans’ Affairs.

The complaints came from 20 active duty and retired military personnel who had worked for Jackson, also according to Tester.

“There’s a lot of smoke there,” Tester told All Things Considered about the as-yet-unsubstantiated allegations.

Sen. Mazie Hirono, D-Hawaii and another Veterans Committee member told Steve Inskeep on Morning Edition that “what’s concerning for this committee is the kind of information that has come forward and we need to find out more about his ability to handle the second largest agency in the entire government.”

Sen. Jerry Moran, a Kansas Republican on the Veterans’ Affairs Committee, has said Jackson denied ever having a drink while on duty. Reporters caught up with Jackson on Capitol Hill Tuesday on his way to Moran’s office.

Asked whether he “categorically denied” the allegations against him, he said, “I’m looking forward to the hearings, so we can sit down and I can explain everything to everyone and answer all the senators’ questions.”

Jackson himself, though, said there was no inspector general report about the allegations. “No, there was not,” he said before brushing off questions about whether he would withdraw.

Jackson has served in the medical unit since 2006, caring for three presidents. He specializes in emergency medicine and served with a battlefield surgical unit in Iraq.

Trump insisted he would stand behind his nominee, even as he suggested the political battle might not be worth it.

“I wouldn’t do it,” Trump also said Tuesday. ” What does he need it for? To be abused by a bunch of politicians that aren’t thinking nicely about our country? I really don’t think, personally, he should do it. But it’s totally his — I would stand behind him — totally his decision.”

The president met Tuesday in the Oval Office with Jackson, a White House official confirmed to NPR.

The official, who declined to speak on the record, said Jackson wants to keep fighting and that Trump supports his decision.

The meeting came after Trump spoke at a press conference alongside French President Macron and said he’d left the decision to Jackson on whether he should keep his name in contention for the top slot at the VA given how ugly the confirmation battle was likely to get.

Trump caught many observers off guard when he picked Jackson to replace ousted VA Secretary David Shulkin. Unlike Shulkin, who had managed a large medical organization before joining the VA, Jackson has never overseen more than a few dozen people.

“I know there’s an experience problem because of lack of experience,” Trump admitted Tuesday. “But he is a man who has just been an extraordinary person. His family, extraordinary success. Great doctor. Great everything.”

Jackson is also a blank slate on one of the key policy questions facing the VA: what role the private sector should play in providing veterans health care. Many of the large veterans service organizations are wary of what they see as a push towards privatization. Shulkin complained that he was fired, in part, for resisting that push.

Former Obama administration staffers also defended Jackson’s character, even as they questioned whether he is the right choice for the VA job.