Where No Plywood Has Gone Before: A Space Agency Will Launch A Tiny, Wooden Satellite 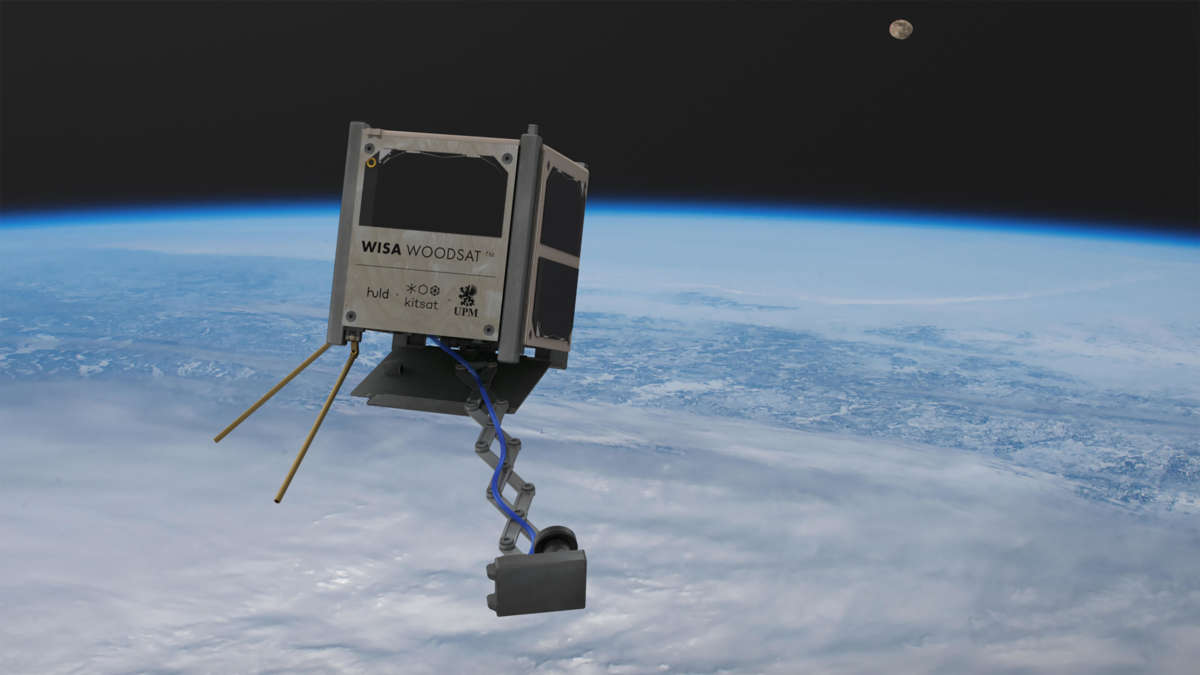 WISA Woodsat, seen in an artist's rendering, is billed as the world's first wooden satellite. It's set to be launched from New Zealand before the end of the year.
Image credit: Arctic Astronautics

Earth-orbiting satellites usually end their lives in a fiery reentry — but a tiny CubeSat scheduled for launch by the European Space Agency later this year might put off a warmer glow than most in its final moments.

That’s because WISA-Woodsat is made mostly out of plywood.

It’s not such a crazy idea: Since it became widely available about a century ago, plywood has been prized for its strength, rigidity and durability — three things that are good in a spacecraft.

Woodsat is designed to test how well WISA plywood — a special high-quality variety produced by UPM Plywood in Finland, one of the project’s sponsors — can withstand the rigors of space.

It’s the brainchild of Jari Mäkinen, a writer and broadcaster from Finland who co-founded a company called Arctic Astronautics, which markets fully functional replicas of orbit-ready CubeSats.

“I’ve always enjoyed making model planes, involving a lot of wooden parts. … [This] got me wondering; why don’t we fly any wooden materials in space?” he said in an ESA news release.

Plywood could be a cheaper alternative to traditional materials

Believe it or not, plywood for small satellites “could be a great low-cost alternative to traditional materials and is absolutely feasible with the right testing and modifications,” Michelle Johnson, an associate fellow in materials and process engineering at Lockheed Martin Space, tells NPR.

Modern spacecraft are often made out of carbon fiber composites “which is essentially an engineered improvement on nature’s original composite, i.e. wood,” she explains.

But using wood in spaceflight has its challenges

“Wood is an amazing structural material — it does very well in comparison to other materials in terms of strength-to-weight ratios,” he tells NPR.

“However, there are several challenges to the use of wood in high-performance applications such as spaceflight,” he concedes.

Because of the grain and the way trees grow, wood can be weaker in some dimensions than others, Banerjee notes, although plywood is specifically designed to minimize that. It’s also difficult to shape without losing strength and it doesn’t easily dissipate energy from impacts.

And then there’s the space environment itself. Satellites in orbit “inevitably suffer radiation damage — which in the case of wood can considerably degrade mechanical strength,” he says.

Samuli Nyman, the project’s chief engineer and also a co-founder of Arctic Astronautics, says, “The base material for plywood is birch, and we’re using basically just the same as you’d find in a hardware store or to make furniture.”

“The main difference is that ordinary plywood is too humid for space uses, so we place our wood in a thermal vacuum chamber to dry it out,” he says in the ESA news release.

Nyman says the Woodsat team will also be testing varnishes and lacquers aboard the spacecraft.

A suite of onboard sensors, including two cameras, one mounted on a tiny retractable (metal) selfie stick, will be used to monitor how the plywood (and the finishes) perform in space.

An ultra-thin layer of aluminum oxide, which is commonly used to coat electronics (and ironically, to make sandpaper) — will be added to the CubeSat to minimize any vapors “outgassing” from the wood into space. Such outgassing “could cloud spacecraft optical instruments,” says Lockheed Martin’s Johnson.

Woodsat, which the ESA says will launch from New Zealand by the end of the year, is being billed as the first wooden satellite. But it might not be the first spacecraft made partly of wood — nor the last.

A type of cork is being tested as thermal protection on parts of the core stage of NASA’s newest SLS rocket, which is currently under development. Cork has also been used in heat shielding on other CubeSats. China reportedly used white oak to make a heat shield for recoverable satellites in some of its early space endeavors.

Finally, a Japanese company and Kyoto University are reportedly working together on a prototype of a wooden satellite for launch in 2023. They hope it will help the craft entirely burn up on re-entry, leaving no toxic substances in the atmosphere or debris to fall back to Earth.