What It’s Like Inside The U.S. Processing Center Welcoming Thousands Of Afghans 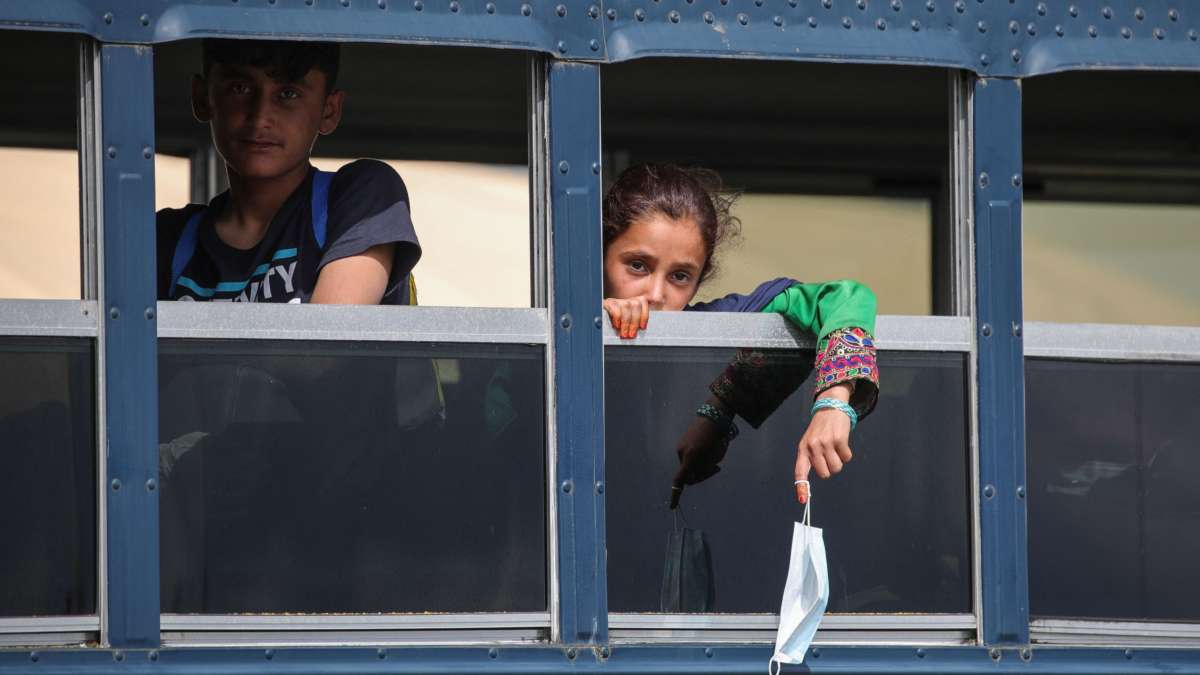 Afghan evacuees sit on a bus at the U.S. air base in Ramstein, Germany, on Aug. 26. Ramstein Air Base, the largest U.S. Air Force base in Europe, has hosted thousands of Afghans.
Image credit: Armando Babani

The Dulles Expo Center outside Washington, D.C., is usually reserved for home and garden or gun shows. Now the cavernous center hosts thousands of Afghan refugees. It’s wall to wall with cots and now includes a medical center and cafeteria — serving halal food — for the steady stream of people.

There are stacks of pillows and blankets, and soldiers and government workers walk through the crowd of men and women in traditional garb.

In the days since the U.S. military left Afghanistan in what ended up being a hasty and chaotic exit to a 20-year war, thousands of Afghans have been airlifted to processing centers in the United States. NPR got an exclusive look inside the largest one, near Dulles International Airport in Virginia. This welcoming center is the first step of a long journey of starting their lives in the U.S.

“There are hundreds of State Department, DOD, USAID and TSA in this building at any one time,” says Tressa Rae Finerty, deputy executive secretary at the State Department, who runs the massive effort. “They’re running three shifts a day 24/7. So we’re really running a small village here.”

Finerty calls a wall plastered with crayon drawings her favorite spot. A huge cardboard box has been flattened and laid out to serve as a drawing board.

“My favorite use of recycled boxes,” Finerty says. “Probably the best I’ve ever seen.”

After landing at Dulles International Airport, the refugees are given a coronavirus test. If they test negative, they are bused to the center. They stream into the building and head toward a line of tables for processing. Everyone is given a wristband based on their medical condition or immigration status. The flow of people is constant.

“We had approximately 29,000 Afghans come through the Dulles space and move on to their forward bases,” says Finerty, referring to the eight U.S. military bases where they will go for further processing. “There are still more than 30,000 still to come.”

Some have worked for the U.S. military or its NATO partners and were granted a special immigrant visa and a path to citizenship — like 52-year-old Fauzia from Kabul. All last names are being withheld for security reasons. Fauzia had a career in telecommunications, and her husband and sons worked for years with the U.S. military.

“My two sons and my husband, they served America for 22 years, they help them,” Fauzia says. “Now I want a better, more peaceful life here for my kids and for myself.”

Other Afghans at the center might have a long wait and an unknown future, arriving in the U.S. on humanitarian grounds. There are young adults separated from their parents with no paperwork. Others have just scraps of paper. They can apply for asylum or wait until Congress offers a special legal status as it did for those fleeing the aftermath of the Vietnam War.

Despite the unknowns, some of the young Afghans are hopeful.

Hamidullah left a good life in Kabul, but his dad worked for the Americans and it was no longer safe. The 22-year-old says he hopes he can continue his education in electrical engineering, but if Afghanistan gets better, he wants to return.

After leaving Afghanistan, refugees traveled through the Middle East before arriving at one of several U.S. bases in Europe.

That’s where the top U.S. officer, Joint Chiefs Chairman Gen. Mark Milley, visited in recent days, stopping in Germany, Italy and Spain and watching as Afghans were screened before heading to the U.S.

U.S. officials say of the thousands who went through Ramstein Air Base in Germany, only a small number are being detained and sent to a U.S. base in Kosovo because they were flagged as possibly having ties to terrorist groups.

Milley spent years commanding troops in Afghanistan. He acknowledges that the war didn’t turn out as many of them hoped.

“One is a feeling of disappointment of the outcome,” he says. “Painful questions of was it all worth it? What it was all about. And the other side. The idea that we just liberated 124,000 people and are giving them an opportunity to be free.”

Milley walks through the line of cots at Ramstein, stopping to talk with refugees to ask about the food and medical services and to ask where they are from and what jobs they had back in Afghanistan.

And he walks up to a picnic table where a cluster of young girls are putting together a puzzle.

One of them is 21-year-old Mahiri, from Kabul. She recalls how she fled the city and got into the airport.

“So much rush,” Mahiri says. “There were so many people. So many gunfires and these things. But we tried our best, me and my two friends. We tried our best to enter the airport. But our family, they could not make it.”

She and dozens of other children and young adults left their parents behind. She has spoken with her mother and father, she says, but wonders how they will reconnect. And where. That will be a challenge for the U.S. government, and it’s one that nobody seems to be able to answer.

In the sea of green cots at the Dulles Expo Center, a small, shy girl approaches us. She’s wearing a pink sweater with gold stars. Her hair is in a neat bun held together by a baby blue scrunchie. She says her name is Mones. She’s 10 years old and her parents were able to get out with her.

Mones came from Mazar-i-Sharif, a large city close to the Uzbekistan border. She tells us she likes it here. She draws butterflies and says those are her favorites. When we ask her what she wants to tell us most, she has a clear message. She wishes the Taliban will go away. “So our country will be in peace forever,” she says.