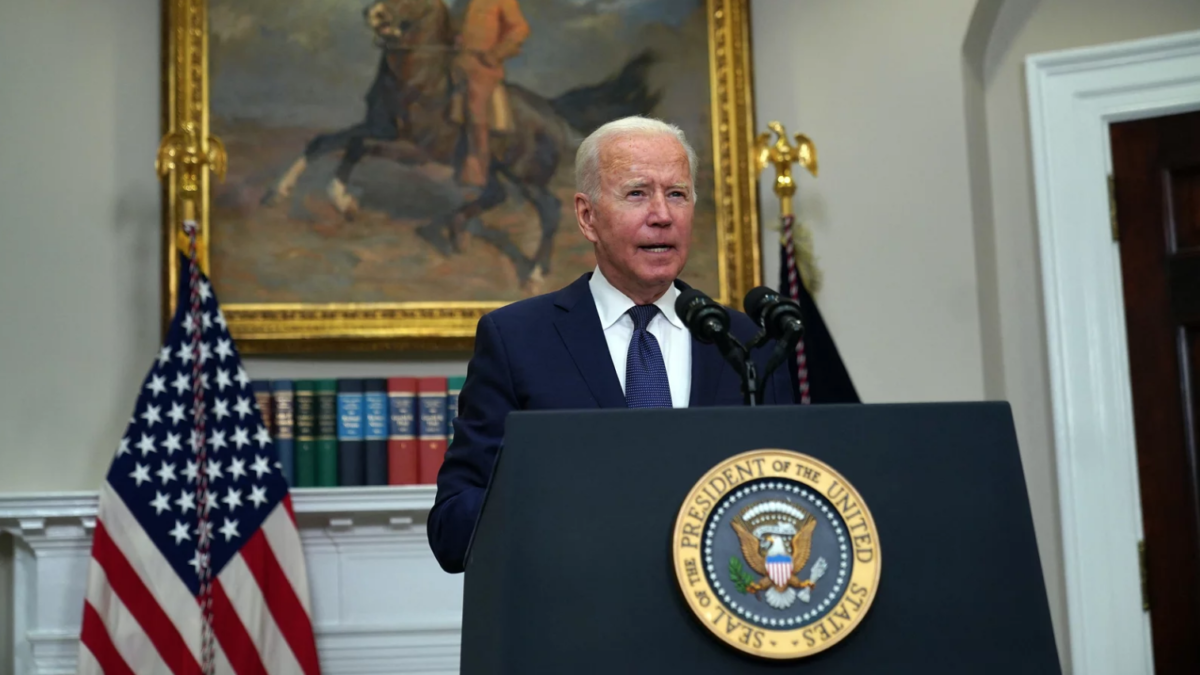 President Biden said the U.S. is continuing to evacuate U.S. citizens and Afghan allies of the U.S. from Afghanistan. Andrew Caballero-Reynolds/AFP via Getty Images

President Biden said on Sunday that the U.S. has evacuated nearly 28,000 people from Afghanistan since Aug. 14, including around 11,000 people in about 36 hours over the weekend.

In a televised address from the White House, Biden reiterated that “any American who wants to get home will get home,” despite a rushed U.S. withdrawal that’s left thousands of U.S. citizens and Afghan allies of the U.S. trying to flee a country now under Taliban control.

Biden said the administration’s first priority in Kabul is getting American citizens out as soon as possible and that the U.S. had extended a “safe zone” around the airport. The U.S. has used phones, emails, and other forms of communication to locate Americans and try to move them to the American compound, he said.

“It’s an incredible operation,” Biden said. But, he added, “the evacuation of thousands of people from Kabul is going to be hard and painful” no matter when it began. “There is no way to evacuate this many people without pain and loss,” Biden said.

Thousands of Afghans, including many who helped the U.S. military in the war, have been crowded outside of Kabul’s airport, risking beatings by Taliban fighters in the hope of getting onto a flight out of the country. Some have been trampled or suffocated in the crowds. The airport is controlled by the U.S. military but the Taliban have control of the rest of the city and nearly all of the country.

Earlier on Sunday, the White House said 23 U.S. military flights had evacuated around 3,900 people from the country, and 35 coalition aircrafts had evacuated another 3,900, from Saturday to Sunday.

The U.S. has extended the safe zone around the Kabul airport

The U.S. has extended the “safe zone” around the airport to expand access to people trying to get out of the country, Biden said, though he did not go into details about what exactly that entails. “We are working diligently to make sure we have increased the ability to get them out,” including changing the “gate operations,” which is why they have been able to increase number of people getting out, he said.

The Taliban have made pledges to allow for the safe passage of U.S. citizens and Afghans seeking to leave the country, but people have often been stopped or beaten while attempting to get to the airport. The Taliban have set up checkpoints.

In discussions with the Taliban, “they have been cooperative in extending some of the perimeter” around the airport, Biden said.

Responding to a reporter asking whether Biden can trust Taliban promises, “I don’t trust anybody, including you,” he said.

If the Taliban wants to help the Afghan people, Biden said, they will need additional help, including economic assistance. “The Taliban has said — we’ll see whether they mean it or not — they’re seeking legitimacy,” he said. The Taliban doesn’t want the U.S. to completely remove its diplomatic presence, according to Biden. But at the moment, he said, it’s “all just talk.”

So far, Taliban fighters have not taken action against U.S. forces, and “by and large” have followed through on what they said in terms of allowing Americans to pass through, Biden said. “And so we’ll see. We’ll see whether or not what they say turns out to be true.”

Biden also repeatedly emphasized the danger American troops and innocent civilians still face. “We have a long way to go, and a lot could still go wrong.” Terrorists, including ISIS and the Afghan affiliate known as ISIS-K, may “seek to exploit the situation — including trying to strike from a distance,” he said.

Planes are not coming directly to America

Planes are not flying directly to the U.S., but to processing stations in two dozen countries across four continents, Biden said. That lets the U.S. sort and process the evacuees, and provide a safe place for special immigrant visa applicants and others to complete their paperwork while the U.S. completes security and background checks, he said.

The U.S. has also activated the first stage of the Civil Reserve Air Fleet program, which was designed after the Berlin airlift in World War II, and relies on the voluntary efforts of commercial aircrafts to fly people from staging centers to the U.S. or to a third country.

Planes taking off from Kabul are landing in military bases and transit centers around the world, where the U.S. is conducting security screening for anyone who is not a U.S. citizen or a lawful permanent resident, Biden said. “Once screened and cleared, we will welcome these Afghans who helped us in the war effort over the last twenty years, to their new home in the United States of America. Because that’s who we are. That’s who America is.”

Biden said he still hopes to meet the Aug. 31 evacuation deadline out of Kabul, though he previously has said it could be extended.