Biden Says His National Security Team ‘Reflects That America Is Back’ 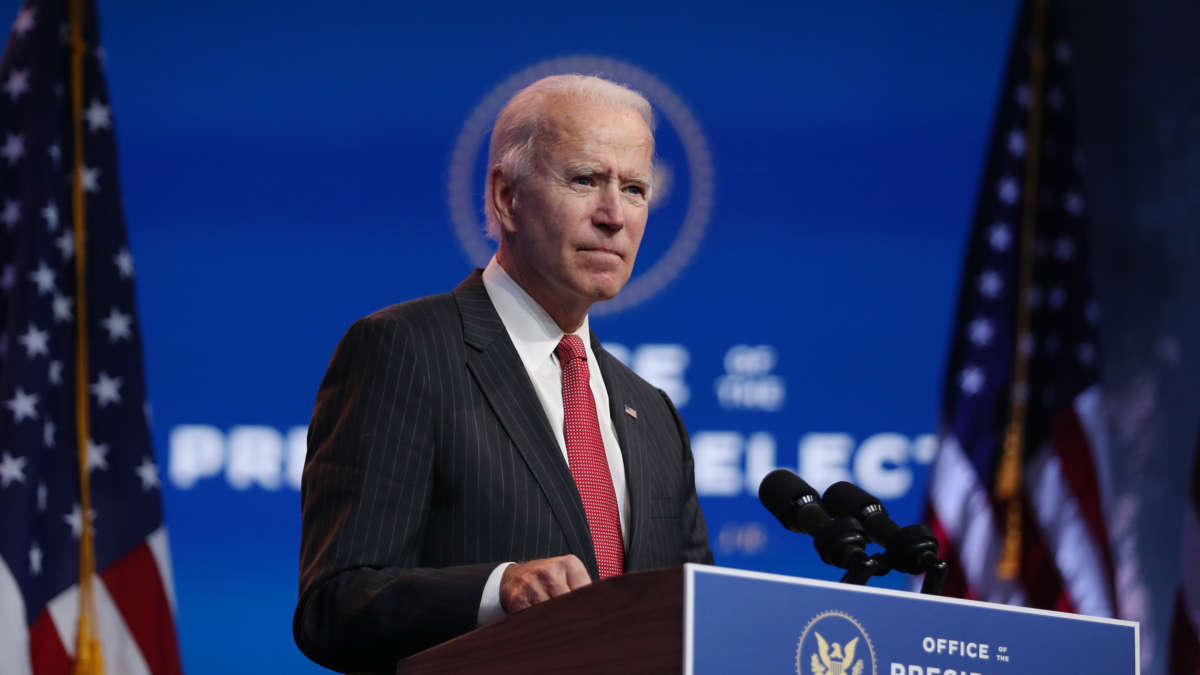 President-elect Joe Biden addresses the media on Nov. 19 in Wilmington, Del. He is announcing a new list of nominees to serve in his incoming administration on Tuesday.
Image credit: Joe Raedle

President-elect Joe Biden stressed a return to multilateralism Tuesday as he introduced key national security and foreign policy appointees and nominees for his incoming White House Cabinet, moving forward with the traditional transition process even though President Trump still has yet to formally admit defeat.

The Biden team released a list of names on Monday, including Antony Blinken to head the U.S. State Department and Alejandro Mayorkas as secretary of the Department of Homeland Security. The group joined Biden in his announcement on Tuesday.

Biden hailed the group, saying the team gathered behind him “reflects that America is back.”

He touted their credentials but also nodded to taking on future dilemmas. “While this team has unmatched experience and accomplishments, they also reflect the idea that we cannot meet these challenges with old thinking and unchanged habits,” he said.

Biden emphasized the historic nature of his nominees — that his pick for director of national intelligence, Avril Haines, would be the first woman to lead the intelligence community, if confirmed; and that Mayorkas would be the first Latino and immigrant in charge of DHS. He also underscored former Secretary of State John Kerry’s role as the first climate envoy in the National Security Council.

He also referenced the formal letter of ascertainment by the head of the General Services Administration released on Monday, enabling Biden’s transition team to access funds and critical information related to public health and national security.

“I’m pleased to have received the ascertainment from GSA to carry out a smooth and peaceful transition of power, so our teams can prepare to meet the challenges at hand, to control the pandemic, to build back better and to protect the safety and security of the American people,” he said.

“My fellow career diplomats and public servants around the world, I want to say to you: America is back, multilateralism is back, diplomacy is back,” said Linda Thomas-Greenfield, Biden’s pick for U.S. ambassador to the United Nations.

“Mr. president-elect, you know that I have never shied away from speaking truth to power,” she said. “I’ve worked for you for a long time, and I accept this nomination knowing that you would never want me to do otherwise and that you value the perspective of the intelligence community. And that you will do so even when what I have to say may be inconvenient or difficult, and I assure you, there will be those times.”

Blinken, who called Biden a mentor and friend, described the history of his family’s journey to America, with his grandfather fleeing the pogroms in Russia and his stepfather surviving the Holocaust.

“For my family, as for so many generations of Americans, America has literally been the last best hope on Earth,” he said.

Blinken added: “America at its best still has a greater ability than any other country on Earth to bring others together to meet the challenges of our time.”

Four of the six roles Biden announced require Senate confirmation. Kerry and Jake Sullivan, tapped for national security adviser, will not need such a vote.

NPR has also reported that Biden intends to nominate former Federal Reserve Chair Janet Yellen to head the Treasury Department. If confirmed, Yellen would be the first woman to lead the agency.

Trump has still yet to admit defeat in the race, tweeting on Monday: “Our case STRONGLY continues” in reference to his campaign’s attempts to overturn the election results, falsely claiming widespread voter fraud.