Wall Street Bosses Wants Their Workers Back. That’s Good For The King Of Falafel 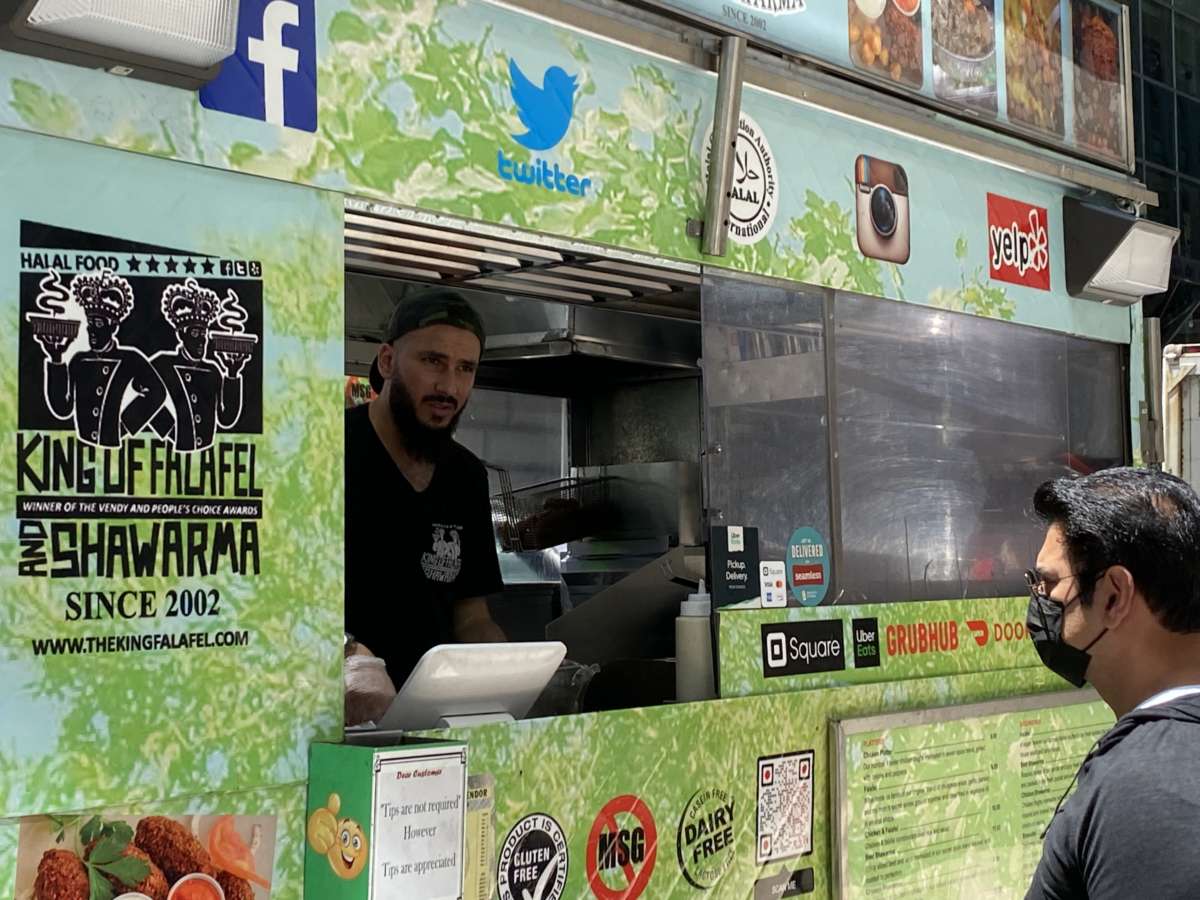 David Shadaha, who works at a cart called "King of Falafel & Shawarma," takes an order from a customer in midtown Manhattan, N.Y. Shadaha is back selling food after taking a job as a GrubHub deliveryman during the pandemic.
Image credit: David Gura

You may assume Wall Street boss James Gorman and falafel maker David Shadaha don’t have much in common. But after months of remote work, they share a goal: to get bankers back into their New York buildings.

With a few exceptions, major Wall Street banks are already moving to resume office work as long as workers are vaccinated. Gorman, Morgan Stanley’s chairman and CEO, expects most of his staff to be back by Labor Day.

“I’ll be very disappointed if people haven’t found their way into the office,” Gorman said in a video posted by Morgan Stanley. “And then we’ll have a different conversation.”

That may not be great for every Morgan Stanley employee, but it’s good news for Shadaha and others whose livelihoods depend on the legions of white-collar workers across Manhattan.

Shadaha operates his “King of Falafel & Shawarma” in Midtown, across the street from the investment firms BlackRock and Evercore.

When the pandemic emptied out New York’s streets, Shadaha had to put away his cart. He spent five months as a GrubHub deliveryman.

“It’s been a disaster,” Shadaha says of the pandemic’s impact.

Today, there are signs of recovery in Manhattan. But for every coffee shop that is open for business, another one has closed its doors for good. The same is true of delis and bakeries.

Pedestrian traffic is coming back, but it’s down 70% from what it was before the pandemic, with large parts of international tourism still shut down.

That makes people like Shadaha even more dependent on office workers. He estimates he is making only about half of what he made in February 2020.

“I’m just working only for the offices here,” he says, gesturing to the skyscrapers that line Park Avenue. “So, if it’s nobody here, it’s like business is dead.”

Financial firms may have raked in record profits during an unprecedented year of remote work, but for a while now, Wall Street executives have been dropping strong hints they want workers to return.

In February, for example, Goldman Sachs CEO David Solomon referred to remote work as “an aberration that we are going to correct as quickly as possible.”

Bankers have already been back at Goldman Sachs since mid-June.

Blackstone executives have asked fully vaccinated workers to return. Citigroup’s head of human resources says the plan is for 30% of that firm’s staff to be in the office this summer.

That Wall Street is coming back so early is no surprise to those who work in the industry. A banker’s job is high stress and high stakes, with long days spent in busy offices or on crowded trading floors. The upside comes in the form of perks and handsome pay, like being able to expense pricey dinners or black cars home.

It was the type of environment that James Davies, the global head of Deutsche Bank’s institutional clients group, had grown accustomed to, which made it such a shock when he came back to a partially deserted office.

“You know, having worked in the industry for 25 years, it was somewhat strange to walk onto the trading floor on a Wednesday morning and see, I’d guess, six-to-ten people here, versus the hundreds we would normally have,” he recalls.

Today, he estimates it is at 40% occupancy, but climbing.

For Davies, it is a decision borne out of convenience and cultural necessity.

“There is a real benefit to people being in the same place,” says Davies, noting as well the importance of what he calls “the soft cues of business.”

Of course not every bank will expect its workers back five days a week. UBS this week said it would adopt a hybrid work model. And French bank BNP Paribas, which has 14,000 employees in North America, also plans to provide flexibility.

“We are expecting everyone will come into the office every week, but obviously not full time,” says Claudine Gallagher, the chief human resources officer for BNP Paribas’s corporate institutional banking group in the Americas.

Boosting the number of traders and bankers working at New York offices matters more than in terms of preserving Wall Street’s culture.

A 2021 report from the Office of the New York State Comptroller estimates the securities industry employed 179,900 people, or 19 percent of New York City’s workforce.

That means scores of ancillary businesses depend on Wall Street, like Schumer’s Wine and Liquors near the investment bank Jefferies and around the corner from Shadaha’s cart.

Larry Duke, who has owned the shop since 1978, says he never considered closing, even when his business dropped by nearly 80%. He laid off staff, renegotiated his lease with his landlord and took out two loans through the Paycheck Protection Program to stay afloat.

“It’s a roller coaster, and there is no defining reason why you have a good day, or why you have a bad day,” he says, with his German shepherd, Klaus, nearby.

But things are getting better as the summer progresses.

Not too far away, Shadaha has a line of customers, waiting for their lunch orders. Workers are filtering back, and they want their usual wrap or platter just like the old days.

“It feels like life is coming back,” Shadaha says.