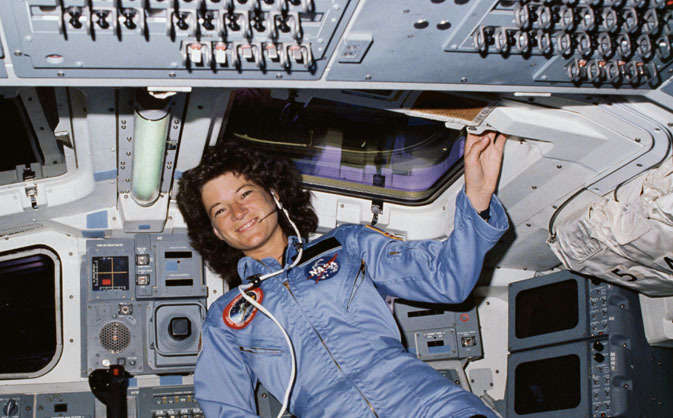 After the final Apollo mission, the space race was over. In the 1970’s, NASA began looking ahead to the Space Shuttle program–a program with a greater focus on science.

University of Central Florida history professor Amy Foster says that focus on science gave women a window to join NASA’s astronaut corps. She spoke with WMFE’s Brendan Byrne about the first female astronauts at NASA and her book Integrating Women into the Astronaut Corps: Politics and Logistics at NASA.

Foster says the first female astronauts were all scientists or physicians with either an M.D. or a Ph.D.

“We’ve got an astrophysicist, a biochemist, an electrical engineer, an ER physician, a surgeon and a marine geologist,” she says. “So, you know, it’s very much science based stuff.”

Foster says although these astronauts don’t say they were discriminated against, they faced “bumps in the road.” She says they were laughed at behind their backs and judged because they were women. In addition, Foster says male engineers were uncomfortable around the women, especially when they had to ask them questions regarding living conditions such as designing the toilet.

“There was a lot of uncomfortable conversations, I think, for the male engineers to have to breach these topics with the women,” she says.

Foster says the first female NASA astronauts understood they were making history and that everything they did would set a precedent.

“They understood themselves as heroes for girls, you know, and young women who were coming up through comparable ranks,” she says.

Foster says when Sally Ride was selected to make the first flight of an American woman in space, she sat down with the other five women as she was writing procedures. She says Ride and the other women understood that if the next woman who came along changed the procedures, there would be pushback.

“The response would be, ‘ugh, these women, they just can’t, you know, they can’t make a decision, they’re flighty, they’re unpredictable,’” she says. “And so they understood that everything that they did was going to be judged and evaluated in a way that the men weren’t.”

Foster says these women were doing a job that was considered to be “an American hero’s job” at a time when there was still animosity toward women in the workplace.

“For a woman to come in and do that, there were a lot of people, both men and women, who were arguing ‘it’s not the place for women,’” she says.

Foster says NASA is doing well now when it comes to gender diversity. She says the last two classes of astronauts have mostly been equal between men and women. Foster attributes this to the greater amount of opportunities for women in the military and the fact that more women are getting advanced degrees in science, engineering and medicine.

“We have a much larger body of women–successful women to choose from,” she says. “And so…because NASA has so many great people to select from it’s much easier to get closer in parity…They do really seem to be doing a good job at trying to diversify.”