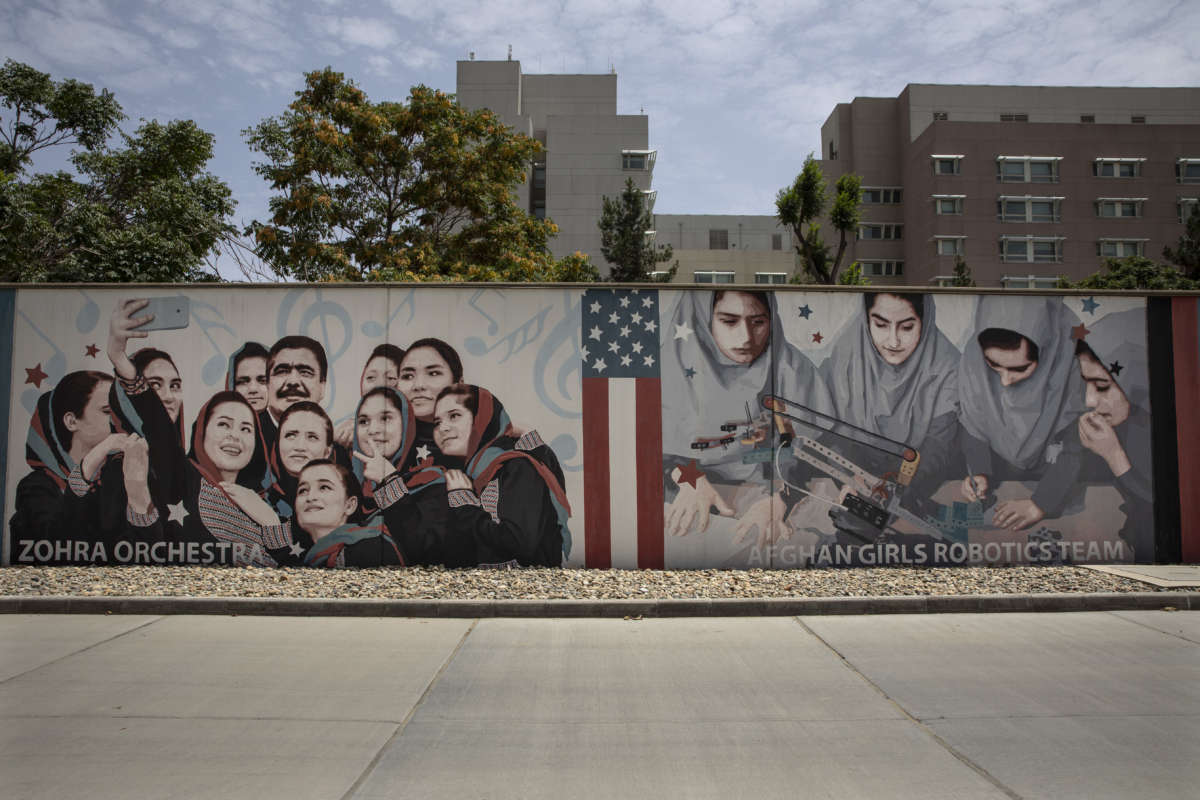 Murals are seen along the walls at a quiet U.S. Embassy on July 30 in Kabul, Afghanistan.
Image credit: Paula Bronstein

A memo obtained by NPR lays out the emergency preparations underway by American diplomats at the U.S. Embassy in Kabul — including the destruction of sensitive documents and computers — as most of them prepare to leave the country.

The memo was written for staff at the embassy and shared with NPR on condition of anonymity.

Most diplomats will be evacuated by 3,000 U.S. troops on their way to Kabul to ensure a safe and orderly departure. However, a very small consular staff will work in Kabul, the memo noted.

The embassy staffers were instructed to destroy important papers and desktop computers before they leave, according to the document.

Charge d’affaires Ross Wilson, the acting ambassador, is also meeting his counterparts in other embassies and updating them on the rapidly changing situation.

The U.S. has also called on the Taliban not to attack the embassy and departing U.S. diplomats. The embassy also employs many Afghan workers. Their future was not immediately clear.

The Taliban’s swift advance in recent days has far outpaced U.S. predictions about what would happen as the U.S. withdrew after 20 years of war.

President Biden announced in April that the remaining 2,500 troops would be leaving. That pullout was more than 90 percent complete and is supposed to be finished by the end of the month.

The expectation was that President Ashraf Ghani’s government could keep at least some measure of control over the country’s main cities.

But the Taliban have responded by launching an offensive that has led to the capture of major cities in the north, west and south of the country. The militant group seized its biggest prizes to date by taking Kandahar, the biggest city in the south, and Herat, the main city in the West.

Kandahar in particular is loaded with symbolism. The U.S. had a major base there before pulling out, and the city is where the Taliban was established in 1994. The group led Afghanistan from 1996 to 2001.

Meanwhile, Afghan government control is rapidly shrinking, limited mostly to Kabul and the eastern parts of the country.

Many panicked Afghans are descending on the capital, fearing a renewal of the harsh Taliban rule they remember from two decades ago.

“I think the decision to pull out the troops was a bad decision,” Neumann notes. “We could have stabilized or held the situation stable with the same force that we now find necessary to put back in temporarily under adverse conditions.”

But, he warned, “Reflecting on the past is a bad use of time when we have so many pressing issues in front of us.”

Neumann says we need to get those citizens who he says supported the American vision and ideals in Afghanistan out of harm’s way.

“The United States is now in a kind of panic — almost panic mode,” Neumann says, “trying to protect our own people and get out the so-called SIV.”

He says we have “a much larger moral debt” to the Afghans who have “bought into our values … when we talk about democracy and about women’s rights and justice.”

This generation of people, Neumann notes, has been the target of attacks from the Taliban and is “in enormous danger now.”

Neumann says we must get these people out of Afghanistan. If we leave them “in harm’s way, we are chalking up an enormous black mark for ourselves, for our country and for the future.”

This story originally ran on the Morning Edition live blog.