U.S. Border Agents Chased Migrants On Horseback. A Photographer Explains What He Saw 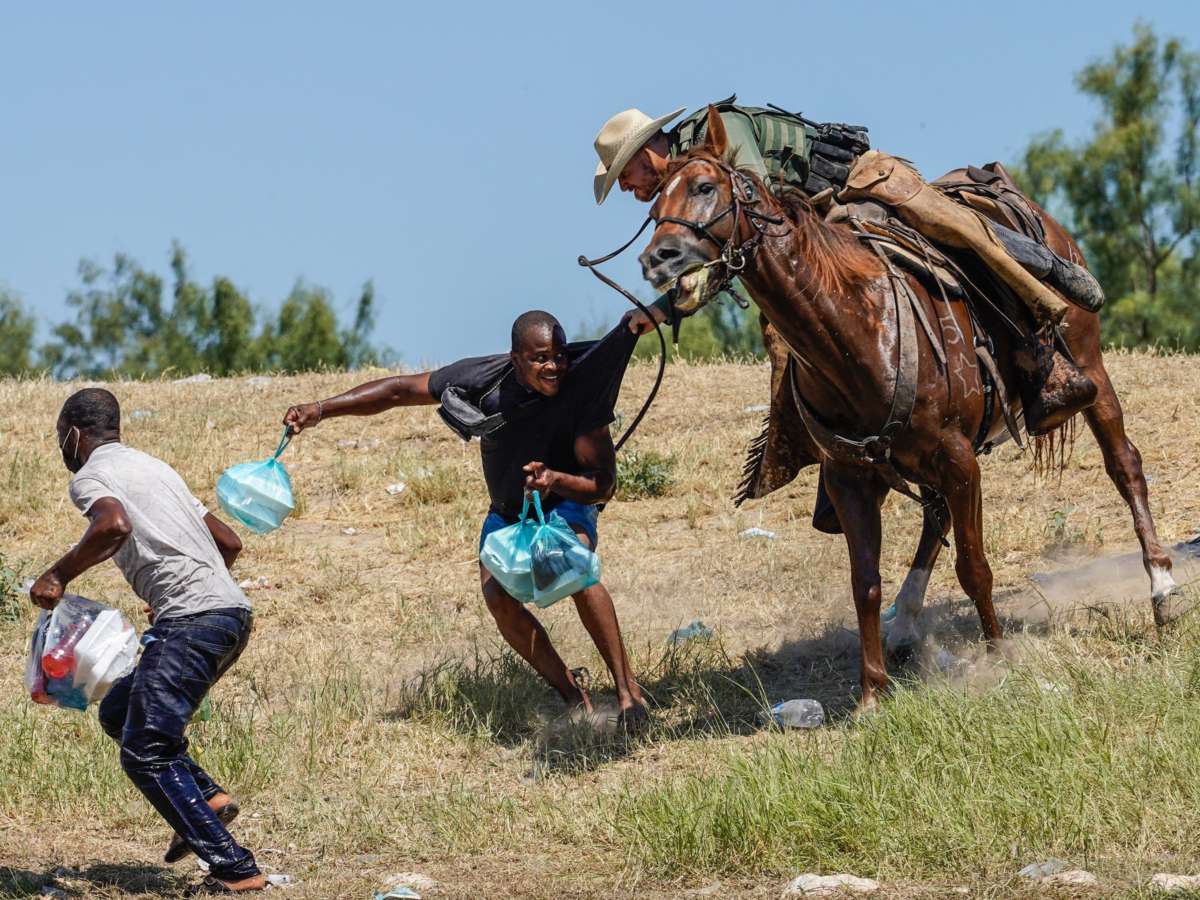 A U.S. Border Patrol agent on horseback tries to stop a Haitian migrant from entering an encampment on the banks of the Rio Grande near the Acuña Del Rio International Bridge in Del Rio, Texas.
Image credit: Paul Ratje

The migrants were attempting to return to a camp near the Del Rio International Bridge, where thousands of migrants have gathered on the U.S. side of the border river. Many of them carried food they’d just bought in Mexico.

But when the migrants attempted to cross the river and return to the U.S. side of the border, agents used their horses to try to turn them back. The dramatic scene immediately sparked new questions about how a “nation of immigrants” treats people who are desperate for a better life.

Video from the scene shows an agent whirling his horse’s long reins as he tries to block a man from entering the U.S. And in widely seen photographs, an agent lunges nearly out of his saddle to grab a man by the shirt, as he carries bags of food.

“I thought the Haitians were quite scared, and I think there was probably some panic which resulted in them trying to run around the horses,” photographer Paul Ratje told NPR’s Morning Edition.

“The agents tried to block them, and then the one agent grabbed a man by his shirt and then kind of swung them around,” said Ratje, who frequently covers border issues. “And I don’t know what prompted that.”

His photos quickly went viral, along with video from the scene. The images have now triggered an investigation into what happened, as well as questions about the Biden administration’s immigration policies.

“Absolutely unacceptable,” Rep. Veronica Escobar, D-Texas, said as she posted Ratje’s photos on Twitter. “No matter how challenging the situation in Del Rio is right now, nothing justifies violence against migrants attempting to seek asylum in our country.”

Homeland Security Secretary Alejandro Mayorkas was in this area on Monday, visiting the Del Rio-Ciudad Acuña International port of entry.

Mayorkas and other officials suggested that what many viewers took to be agents using whips were actually agents using their horses’ reins.

“But we are going to investigate the facts to ensure that the situation is as we understand it to be and if it’s anything different, we will respond accordingly,” he said, according to Texas Public Radio.

The Department of Homeland Security said the Customs and Border Patrol’s Office of Professional Responsibility is investigating the incident, adding that the agency’s inspector general has also been informed.

“The footage is extremely troubling and the facts learned from the full investigation, which will be conducted swiftly, will define the appropriate disciplinary actions to be taken,” DHS said.

“We are committed to processing migrants in a safe, orderly, and humane way,” the agency stated. “We can and must do this in a way that ensures the safety and dignity of migrants.”

White House Press Secretary Jen Psaki repeatedly called the images “horrific” when she was asked about the incident on Monday, using the same word she used to describe the errant U.S. strike that recently killed civilians in Afghanistan.

The secretary was asked for the White House response to agents “seemingly using whips” to corral migrants.

“It’s horrible to watch,” Psaki said, while cautioning that she did not have more information about what transpired.

Of the video, Psaki stated, “I can’t imagine what the scenario is where that would be appropriate.”

In response to a later question, she added, “It’s obviously horrific, the footage.”

Psaki also reiterated the U.S. stance toward the migrants, that now is “not the time to come,” citing the state of the U.S. immigration system as well as the global COVID-19 pandemic that has forced tight travel restrictions.

Many of the more than 14,000 migrants who’ve been camping at the border are hoping to seek asylum in the U.S., as Haitians flee a country that is in complete disarray. But in recent days, the Biden administration has been deporting migrants by the planeload, sending thousands of people back to Haiti.