Trump Visit Comes As Floridians Ask, How Much Water Should Lake Okeechobee Hold? 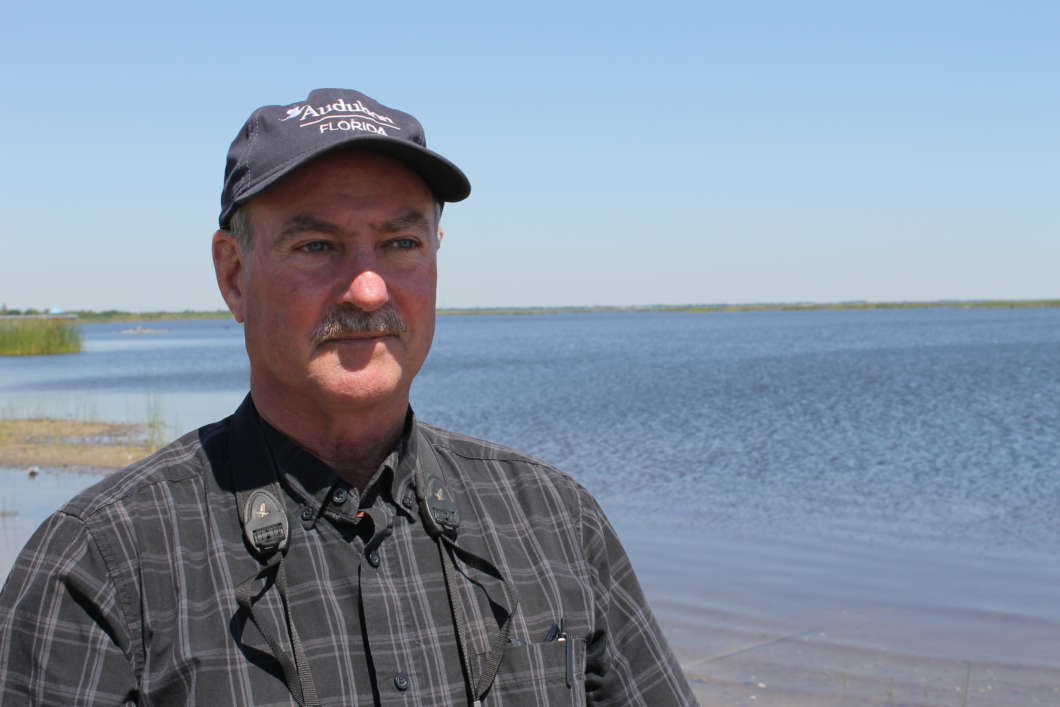 President Donald Trump is visiting Lake Okeechobee on Friday. The trip to the troubled lake comes as top Republican leaders in the state say the president’s proposed spending on Everglades restoration is not enough.

Lake Okeechobee is among the state’s most significant natural resources, and there’s debate after last year’s toxic algae over just how much water the lake should hold.

Paul Gray steps into ankle-deep water lapping the sandy beach on Lake Okeechobee’s north shore. But he says the beach shouldn’t be here. It should be grassy marsh.

“We’re walking in open water. Well, there are a couple of little tiny plants here. They’re three inches tall. They should be everywhere, and so this is what we’re trying to regrow.”

High water since Hurricane Irma in 2017 has wiped out the marshes of the state’s largest lake.

“Basically we’ve lost about 60 square miles of plants in Lake Okeechobee just due to deep water.”

“We have to regrow them, and we have to start from scratch but they leave seeds behind. And so normally we want to get down to 12 feet, but in order to get the sunlight to the areas where they grow – they grow down at the nine-, 10-, 11-foot contours – we gotta get the lake all the way down to 11 feet.”

High water also prompted massive discharges last year that helped trigger widespread toxic algae. Gray is among those calling for a lowered lake. Gov. Ron DeSantis says he has contacted Trump about instructing the U.S. Army Corps of Engineers to draw down the lake. Here is DeSantis in January in Naples.

Lake Okeechobee spans half the size of Rhode Island and serves as the hydrologic heart of the Everglades, a watershed supporting the drinking water of more than a third of Floridians.

The U.S. Army Corp of Engineers manages the lake by releasing water through a series of canals to the coasts. The federal agency has begun a three-year effort to revise the rules regulating the discharges as part of a nearly $2 billion project to refurbish the lake’s aging dike.

“We’re looking at it truly as we’re starting to manage the system,” says Lt. Col. Jennifer Reynolds of the U.S. Army Corps of Engineers.

Gray says the marsh is a “skeleton” of what it should be. Photo by Amy Green

She says the new rules also are needed as some Everglades restoration projects are nearing completion.

The federal agency has said in the meantime it will lower the lake but not to any target. Reynolds says drawing down the lake now can help prevent discharges during the summer when toxic algae thrives.

“And by allowing more light penetration to that vegetation in the lake that helps give the lake an ability to heal itself.”

Statewide Floridians are dreading another toxic summer. But a lowered lake worries the region’s farming communities that depend on the lake for recreation, tourism and water supply. Hendry County Commissioner Karson Turner opposes drawing down the lake to 10 and a half feet.

“You’re messing around with Mother Nature. You mess around and catch a drought, and now you’re getting to a situation where short of a natural storm event you’re not going to be able to recover the lake.”

Back at Lake Okeechobee sparse patches of grass shoot up from the sandy beach. Paul Gray says the marsh should be thick and lush.

“What you’re seeing now is just a skeleton of what ought to be here.”

He says it’s a sign the lake is stressed.

But he says the marsh can come back and so can the lake.