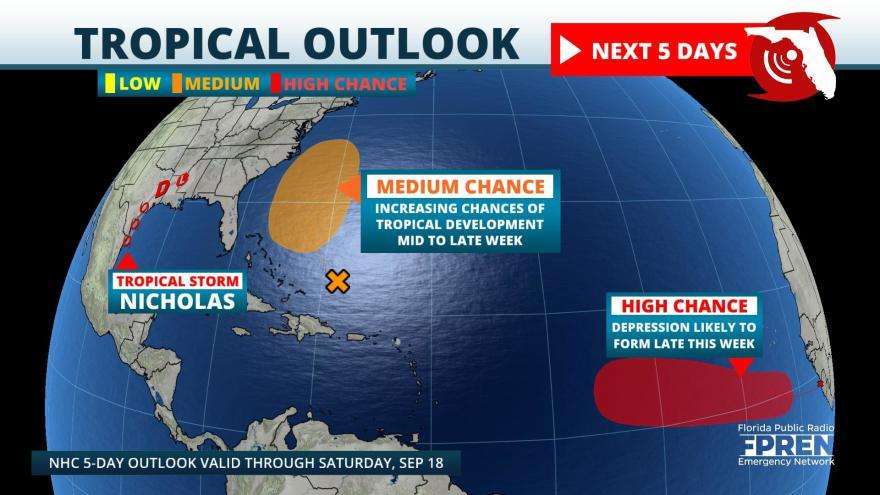 Tropical Storm Nicholas is much closer to the Texas coast Monday, and with it will come a high potential for flash flooding.

The center of Nicholas reformed farther north late Sunday night, placing it within 40 miles of the mouth of the Rio Grande River as of early Monday morning. A northward track is forecast to take the tropical storm into the central Texas Gulf coast Monday night or early Tuesday morning. Storm Surge and Tropical Storm Watches and Warnings were in effect for a large portion of the Texas coast, and a Hurricane Watch was in effect from Port Aransas to Freeport for the possibility the storm could reach hurricane intensity for a brief time near landfall. Regardless of its classification, flash flooding is expected to be the primary hazard. 8 to 16 inches of rain, with local amounts up to 20 inches, may produce considerable flash and urban flooding according to the National Hurricane Center.

Once Nicholas moves inland, its winds will diminish but the threat of flash flooding will not. Parts of Louisiana, Mississippi, Alabama, and even the western Florida Panhandle has some risk of flash flooding Tuesday into at least Wednesday. 1 to 3 inches of rain, on average, is forecast over Florida, Alabama, and Mississippi, with as much as 10 inches in parts of southwest Louisiana.

Meteorologists are monitoring two other tropical disturbances. An area of low pressure is forecast to gradually form a couple hundred miles north of Bahamas and east of the Carolinas. This low could become a tropical depression north to north-northwestward over the Atlantic waters east of the U.S. coastline. It is still too soon to determine whether the system might get close enough for impacts in the Carolinas later this week.

A strong tropical wave is moving off the coast of Africa and is highly likely to become a tropical depression later this week over the deep tropical Atlantic. It is forecast to stay over water through next weekend, but it is too early to predict whether it may eventually affect the Caribbean or the U.S. coastline.