Tornado crosses I-75 in Marion County 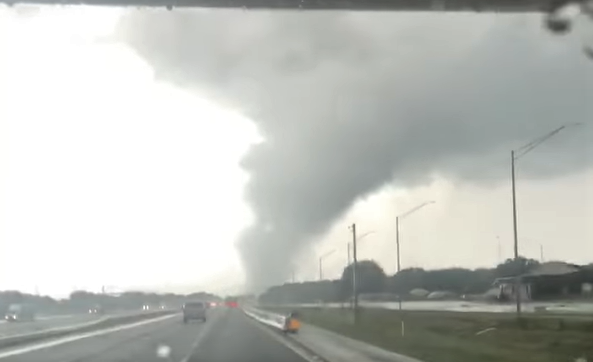 Laura Taylor with Loving Friends Transport recorded this image of a tornado on Interstate 75 in Marion County.

A portable building, being transported on Interstate 75, was destroyed by a tornado. Photos: FHP

It lifted a 36-foot portable building off the back of a semi and tore it to pieces, according to the Florida Highway Patrol. It wrecked a nearby farm, too, but the animals escaped harm.

And nobody was seriously injured.

Animal rescuer Laura Taylor recorded the twister with the dashboard camera on her transport vehicle. Taylor says she slowed down, turned on her flashers and watched it swing across the interstate.

“As I looked to my left, I saw swirling clouds, and I thought they were kind of like arched towards the ground,” she said. “And I’ve driven over 250,000 miles on the road and I know that signature look. So I slowed down to about 20 miles an hour and put my flashers on and I’ll be darned if that thing didn’t just come straight across I-75.”

Taylor saw debris in the funnel cloud, which concerned her. When she posted her video on Facebook, the farmer reached out and told her his ranch had been hit.

At the end of her video, Taylor can be heard saying, “I just missed that, woo doggie!”