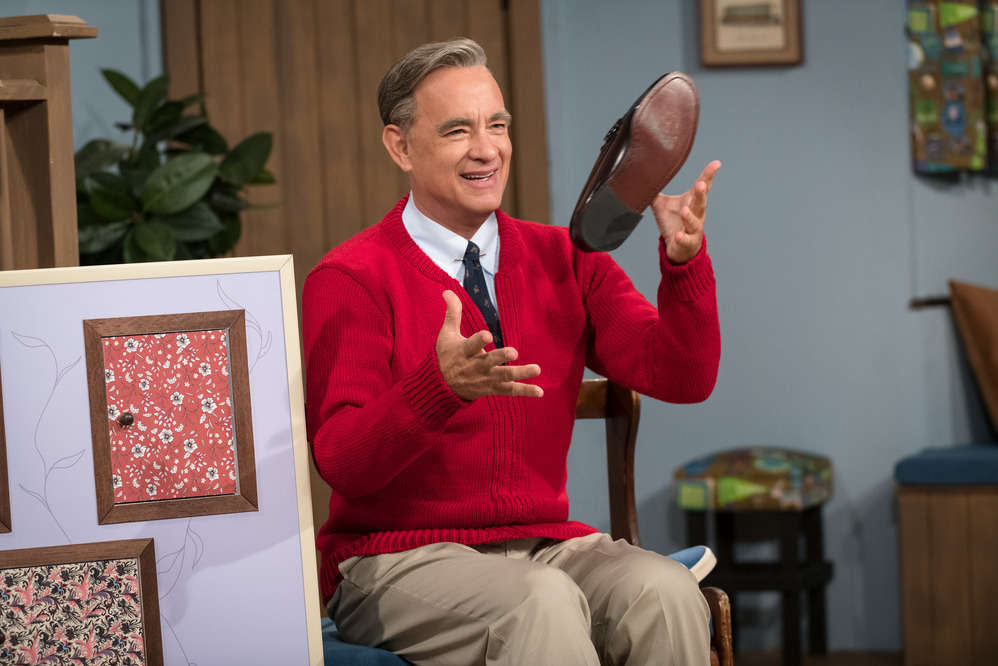 Tom Hanks stars as Fred Rogers in A Beautiful Day in the Neighborhood. Hanks watched a lot of Mister Rogers to research the role and found as an adult, you don't really "get it": "Why is it taking so long? What's the big deal? What are these fish?"
Image credit: Lacey Terrell

To prepare to play Fred Rogers, Tom Hanks estimated he watched “about eight million hours” of Mister Rogers programming. “I saw every one that I could possibly see,” Hanks says.

Hanks never met Rogers, who died in 2003. But he’d seen plenty of imitations of the beloved children’s television star, from comics such as Johnny Carson, Eddie Murphy and Martin Short.

“Comedians could easily just adopt a sing-songy kind of like voice, and boom: There you had Fred Rogers commentary,” Hanks says. But this challenge was different.

“When you are not delivering a punch line and you’re just trying to recreate who the man was, and the way the man thought, well, you end up starting over from whole cloth,” Hanks explains.

In the new film A Beautiful Day in the Neighborhood, Matthew Rhys co-stars as the grizzled, cynical reporter who wants to get the lowdown on the man in the red sweater, with a soft voice and a sterling heart.

Hanks says he doesn’t “look anything” like Rogers. He remembers director Marielle Heller telling him: “We will give you a wig and we’ll try to figure out something with your eyebrows and the rest is up to you.”

But he found that the zippered, cardigan sweater went a long way.

“It’s kind of like a suit of armor,” Hanks says. “I mean, Batman looks like Batman when he puts on that cape and cowl.”

I wake up in the morning thinking: How can I make something better today? … I wouldn’t necessarily say I’m a nice guy, because people have suffered my wrath — and anybody who has tried to take advantage of my good nature has suffered horribly … but I feel as though I am a joyful person. And I think if I’m nice, it’s because I am trying to share a sense of joy that I find a natural commodity. And why not? Why not have a good time? Why not bring a little bit of joy from anything from a long plane ride, to a short elevator ride, to an exchange over an extra-large Venti-sized latte in line at your local coffee place. To me, it’s the natural order of things, the natural state of things.

Other writers were getting [assigned] Gorbachev and Reagan and Muhammad Ali [for the Esquire series]. And he got Fred Rogers — the short end of the stick. But what he found out later on … is that Fred picked him. Fred had looked at all the work he done. He was aware of his reputation as a writer. And Fred actually went against some people’s wishes. … Fred said, no, I want him to be the guy who profiles me. …

Fred knew that there was nothing this guy was going to be able to sweat out of him. Tom, who was around the set quite a bit, would talk about how one of his techniques was to out-wait his subjects — just be around long enough, ask enough questions and also just observe and eventually the true self would emerge, and boom … he would have the secret. He would have the con that, whoever he was doing a piece on, would reveal himself. And lo and behold, evidently Fred had no con.

On whether Rogers was performing

He was performing in the same way a great Sunday orator performs from a pulpit. He was performing the same way a great essayist is trying to communicate and examine a theme without becoming didactic. The greatest anecdote I heard about Fred was part of it was from the magnificent documentary … Won’t You Be My Neighbor? … He was an ordained minister who … never once mentioned God in any of his television programs. So here he’s got a captive audience of two and three and four years old. And if he wanted to proselytize a very specific philosophy, he could have done it. And he never did. That is the performance, I think. … He was going to be his message as opposed to speak his message.

On why Rogers went into children’s television

He went into children’s television because he saw that this magnificent machine that was going to be in everybody’s living room was really meant to turn the children that were watching it into consumers. Meaning that if you don’t eat this breakfast cereal, if you don’t have this toy that you can ask your parents for, if you’re not wearing these clothes, you don’t have the same amount of worth. … He viewed that, I think, as a great sin against the audience.

He would be talking to anybody from Mr. McFeely [who played Mister Rogers’ delivery man] to [cellist] Yo-Yo Ma, and he would just throw these looks down the lens — right down the barrel of the camera. … And the look always said: “Hey, isn’t this something? Isn’t it great to share this right now? How about that?” … That is the specific connection that he saw as the potential of television.

On Rogers’ famous guidance that in times of tragedy, look for the helpers

He said, you look to the helpers, the people that show up to help the community … as the example of what to do next. … You can’t go back in time … but you can help those who have been touched or exposed or traumatized by the tragedy. And from that is the step of hope that I think keeps us all going somehow. … There are those people who will always turn it into an example of hope and help and aid and succor … you share the fact that we’re all in this together.

Denise Guerra and D. Parvaz produced and edited this interview for broadcast. Beth Novey adapted it for the Web.