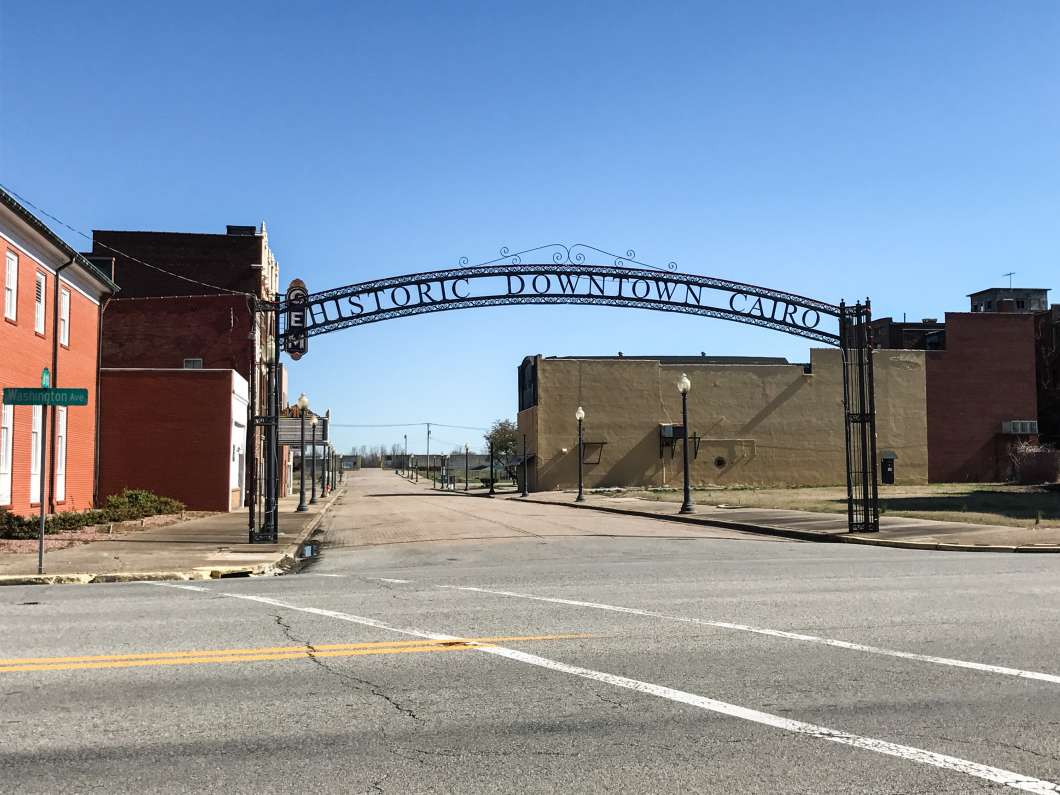 Cairo has lost more than half of its population in recent decades. Today, there are just under 3,000 people left.
Image credit: Kirk Siegler

At the very southernmost tip of Illinois, the pancake flat cornfields give way to the rolling, forested hills of the Delta.

Here, at the windy confluence of the Mississippi and Ohio rivers, it feels more southern than Midwest when you arrive at the old river port and factory town of Cairo, once made famous in Mark Twain’s The Adventures of Huckleberry Finn.

In the past three decades, his hometown lost half its population. Alexander County is not only the poorest county in Illinois; it’s also one of the fastest depopulating counties in the United States.

In Cairo, weeds creep up through the cracks in the old brick streets. Whole city blocks are condemned.

“I’ve watched for 40 years this city decline,” Matthews says, on a recent tour.

Nature is taking over at the abandoned lot that used to house Cairo’s largest employer, the Burkart Foam company. It closed more than a decade ago. More recently, the paper mill just across the river in Kentucky closed. More people moved out. In December of 2015, the only grocery store closed, soon followed by the gas station.

“They no longer have pumps,” Matthews says, frowning as he points it out.

All this blight: the abandoned businesses, the old, partly burned down mansions with roofs caving in, it’s unsettling. But Matthews says state grants promised for demolition of properties like these dried up long ago, and the job was barely half done.

There is a lot of talk right now about how best to try and bring back struggling small towns, especially in the rural Midwest, which Donald Trump carried easily. Many of these places would also see steep cuts in aid if the president’s budget gains traction in Congress. Visit Cairo, and at times it feels like a town on life support.

“You know, you say to your government, we want to clean it up,” Matthews says. “But we need help.”

In Cairo, there is a lot of anger and many people feel slighted. A few years back, then-Illinois Gov. Pat Quinn visited with reportedly great fanfare at the time and designated Cairo as a port authority. The idea was that the town could once again take advantage of all the barge traffic on the rivers. The governor left town, and so did the promise of funds.

A frustrated Tyrone Coleman, Cairo’s mayor, says the town is well positioned to take advantage of the expected increased barge traffic due to the Panama Canal expansion. After all, it’s what put the city on the map in the 1800s.

“Strategically, geographically, this is one of the most untapped resource areas in the country,” Coleman says.

Lately, some state lawmakers have made renewed commitments. In a statement, Gov. Bruce Rauner’s office says he is working to make Cairo and other small Illinois towns competitive. But in Cairo, that’s a tough task.

Coleman says the City Council is making progress and studying the feasibility of starting a port authority on its own. The town may also be close to getting a grocery store back. But it’s hard to recruit companies, let alone new residents, when a lot of neighborhoods look abandoned.

Cairo as a “microcosm”

The mayor and other leaders say there’s plenty of blame to go around, and locals aren’t off the hook by any means. Corruption has been a big problem here. Cairo has also struggled with a lot of racial tension over the years. There were violent race riots in the 1960s. The federal government intervened in the 1980s to get more minority representation at City Hall, and over the years Cairo’s population has shifted from being majority white to majority black.

A lot of people here say the town never fully recovered from the race riots.

Jerome Carr is one of them. He moved here in 1994 from the Chicago area, drawn by the slower pace and the fact that locals didn’t lock their doors at night. But he has grown cynical over all the promises made to bring new life into this town.

“Cairo is kind of like the microcosm of what’s going on in our society or in our country on a larger scale — dysfunction and politics,” Carr says.

He got so frustrated recently that he decided to enter politics himself for the first time, running for a seat on the local school board. He sees his town at a critical juncture. The federal government recently took over Alexander County’s housing authority after a corruption scandal. There are hopes that officials from the U.S. Department of Housing and Urban Development will turn things around, repair and modernize the units. But Carr worries they could just decide to bring in the bulldozers.

“It’s a known fact, if they lose the projects, it’s a wrap,” Carr says.

He isn’t being dramatic. Just like in a struggling neighborhood in a city, everything here is connected. First, you lose the grocery store, then maybe the housing development, and then, the biggest fear, what happens to the school?

The heart of the community

Two schools in town recently closed. Now, the junior high has merged with the high school. And no one is sure about its future.

“Anyone who spends much time in rural America sees that when a high school leaves or an elementary school leaves, then families move,” says Andrea Evers, the superintendent.

Since she arrived five years ago, 120 students have left. There isn’t much property tax revenue in Cairo. Most of the school’s state and federal funding is based on enrollment.

“We’re hoping for brighter days ahead,” Evers says. “We’re very, very optimistic that the grocery store will come back, and the paper mill.”

If some stability returns, Evers says, her school district can weather through it. But another closure would be devastating. This school is the center of the community. It’s open late most nights for kids to use the gym and library. There are town forums here, meetings and weddings. It even houses Cairo’s only food bank.

Sophomore Nigel Williams, who wants to be a high school principal someday, says it’s tough watching his friends move away. He says his town gets a bad rap, but there’s a lot of talent and potential here.

“A lot of people discriminate Cairo for what they see,” says Williams. “But they don’t actually come in and get to know it … it’s the difference between seeing and actually knowing.”

This is something you hear a lot in Cairo. Like in much of rural America, people’s identity is tightly wrapped in their town. And then there’s the sense that places like this have been forgotten.

For the first time in years, Alexander County voted Republican in the last presidential election, though most of Cairo itself went blue.

Phillip Matthews, the community organizer, steers his sedan through a small entry gate and into one of Cairo’s two main housing projects. The roofs are in need of repair. Some of the worn brick buildings have faulty heat. There’s no playground, so some kids have made do by fastening a basketball hoop out of some old milk crates.

Matthews has a question for the new president.

“If you can find billions of dollars to build a wall in Mexico, you can’t find the money to fix this?” he asks.

Matthews says people here see government failing them at all levels. They’re tired of listening to the promises and talking about the problems. They want them solved.