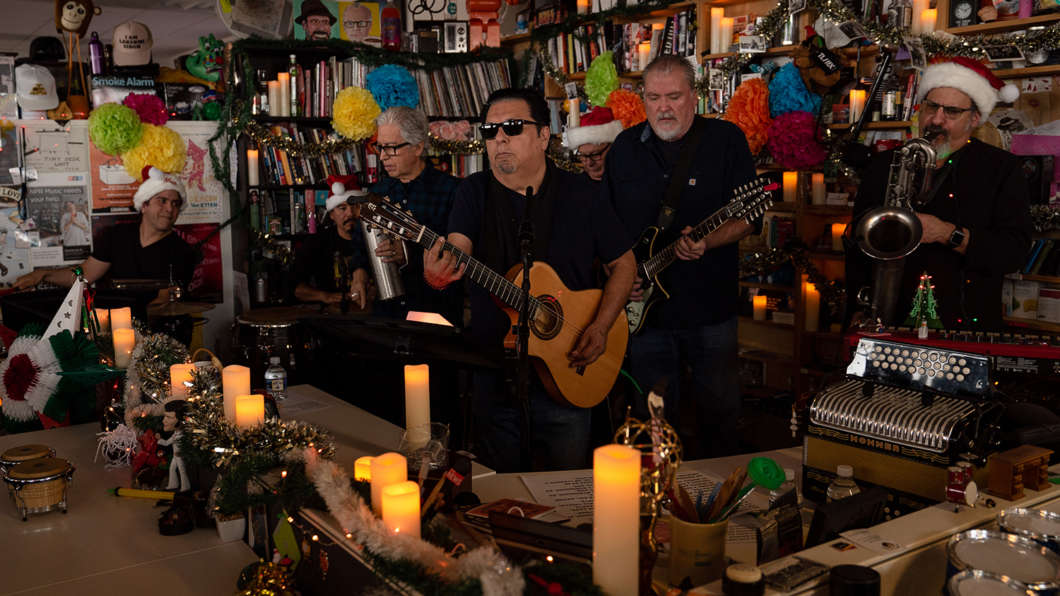 When Los Lobos gathered behind the Tiny Desk, it felt like they were cramped in the back room of a family Christmas party. “The only thing missing today are the tamales!” I told my office mates while introducing the band, a reference to a Mexican-American Christmas meal staple. The vibe in the room was definitely familia, with the presence of many longtime fans as well as folks who came for the holiday cheer, Lobos style.

The band called up tunes from the Latin holiday song book, straight from their recently released, first-ever Christmas album, Llegó Navidad, a bilingual collection of songs from across Latin America and the U.S.

They kicked it off with an obscure novelty hit that was once popular in Latino households in the Southwest, “¿Dónde Está Santa Claus?” It was originally a lushly orchestrated affair that is now a “lowrider oldie.”

The band adds a David Hidalgo and Louie Perez original to the Latin holiday songbook with “Christmas and You,” a plaintive ballad about desperate loss that we would easily call a carte vena (vein cutter). The great Mexican essayist Alma Guillermoprieto once wrote that it’s not a real Mexican party “until someone cries,” and this song does the trick.

The party ends by sending everyone home, dancing with “It’s Christmas Time In Texas,” a song by the great Tex- Mex troubadour, Freddy Fender. It’s a Los Lobos scorcher, complete with accordion and good times that would get even abuelita dancing.