Timeline: What We Know So Far About What Led Up To The Surfside Condo Collapse 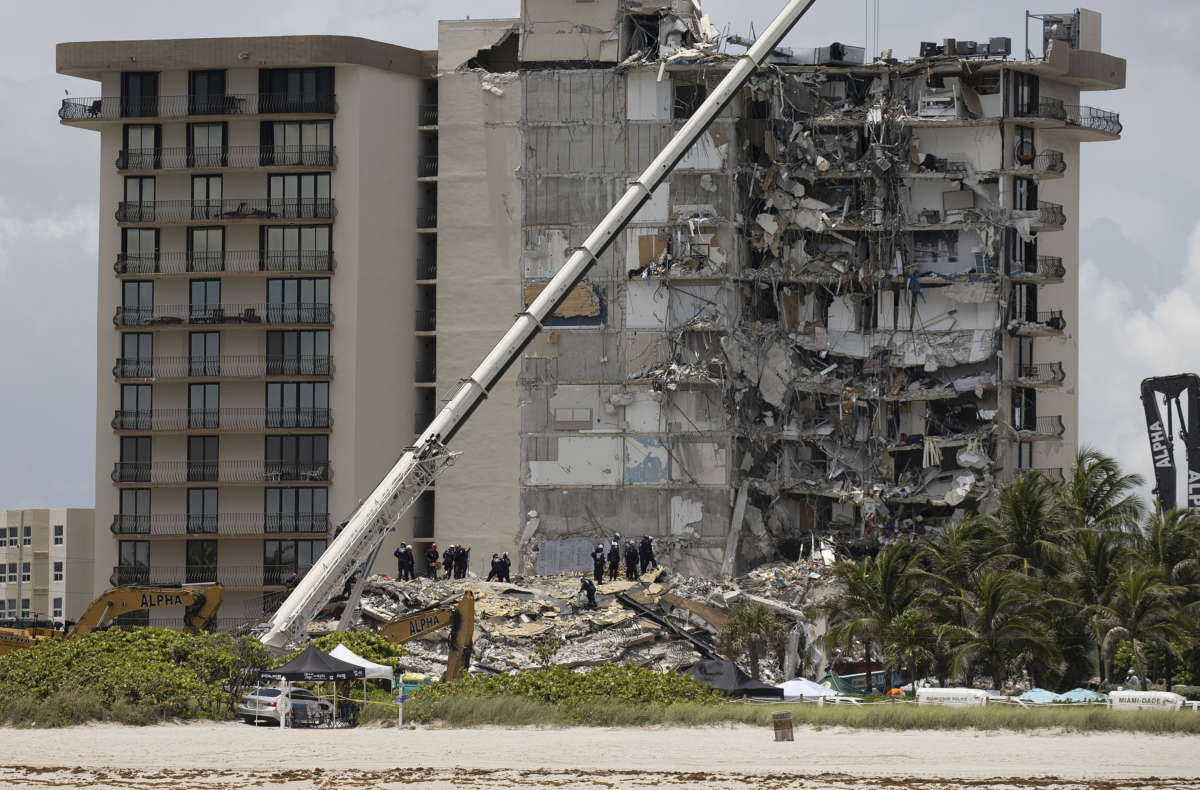 In the pre-dawn hours of June 24, part of the Champlain Towers South condo building in Surfside, Fla., suddenly collapsed.

Video of the building’s collapse showed floor after floor crumbling in an instant, creating a massive pile of rubble.

Less than a week later, the death toll has reached 11, with another 150 people unaccounted for.

Now, one of the largest U.S. rescue operations in recent memory is underway in the beachfront community just north of Miami.

As the search for survivors continues, those who barely escaped the collapse or lost loved ones in the incident want to know how the 12-story structure could have failed so severely.

The cause of the collapse remains unknown, but here’s a timeline of what we know so far:

Daniel Ciraldo, executive director of the Miami Design Preservation League, told the newspaper that the complex was the first project to be built in Surfside following a moratorium on new developments issued by Miami-Dade County in the 1970s. The moratorium stemmed from the county’s degrading water and sewer systems.

The Champlain Towers’ developers paid Surfside $200,000 in late 1979 to cover half the cost of a new sewer system, and shortly afterward they began constructing the two condo buildings.

Among the developers was philanthropist Nathan Reiber, who died in 2014. According to his obituary, Reiber was given the key to the city after completing the towers.

A structural engineering report on the Champlain Towers South condo details numerous problems with the building, including “major structural damage” to the concrete slab below the pool deck. It recommends extensive repairs “in the near future.”

The nine-page report, compiled by Morabito Consultants, notes that the structural concrete slab is flat, rather than sloped, which means that water cannot drain off. Instead, it pools until evaporating.

The consultants also find “abundant cracking” in concrete beams in the parking garage and suggest that previous attempts to repair the damage had failed.

Failure to complete recommended repairs, the report warns, could “cause the extent of the concrete deterioration to expand exponentially.”

After the collapse, local officials said that they were unaware of the 2018 study.

“We did not know about this report,” Miami-Dade County Mayor Daniella Levine Cava told reporters on June 26. “We are obviously very interested in all of the evidence that’s coming to light.”

Burkett, the Surfside mayor, told reporters that the report was likely not read at the time but said the town did in fact have the report on file.

Five weeks after the engineering report is issued, a Surfside official reassures residents that the condo tower is in good condition.

According to minutes of a Nov. 15 board meeting of the Champlain Tower South Condominium Association obtained by NPR, a building official for the town named Ross Prieto appeared to discuss that report with residents.

“Structural engineer report was reviewed by Mr. Prieto,” the meeting minutes say. “It appears the building is in very good shape.”

Prieto is no longer employed by Surfside, town officials said.

April 2020: Signs of sinking land in the area

A study by researchers at Florida International University and the University of Padua finds that in the 1990s, the region where the condo tower collapsed showed evidence of “land subsidence.”

This type of sinking occurs when the Earth’s surface settles or shrinks, and the study’s authors found that it was happening in nearby Miami Beach at a rate of 1 to 3 millimeters per year.

In a news release issued by Florida International University after the collapse, one of the researchers, Shimon Wdowinski, said land subsidence would not be the sole reason a building fails.

June 24: At around 1:20 a.m., while many residents were sleeping, the condo tower shakes and then partially collapses, destroying about 55 apartment units.

Rescue crews race to the scene and begin poring over the wreckage in search of survivors.

Susana Alvarez, 62, is in her bed on the 10th floor when she begins to feel shaking.

“Like I was on a ride,” Alvarez said in an interview with NPR. “The bed was shaking. My balcony doors opened. And it felt like the longest thunder I had ever heard in my life.”