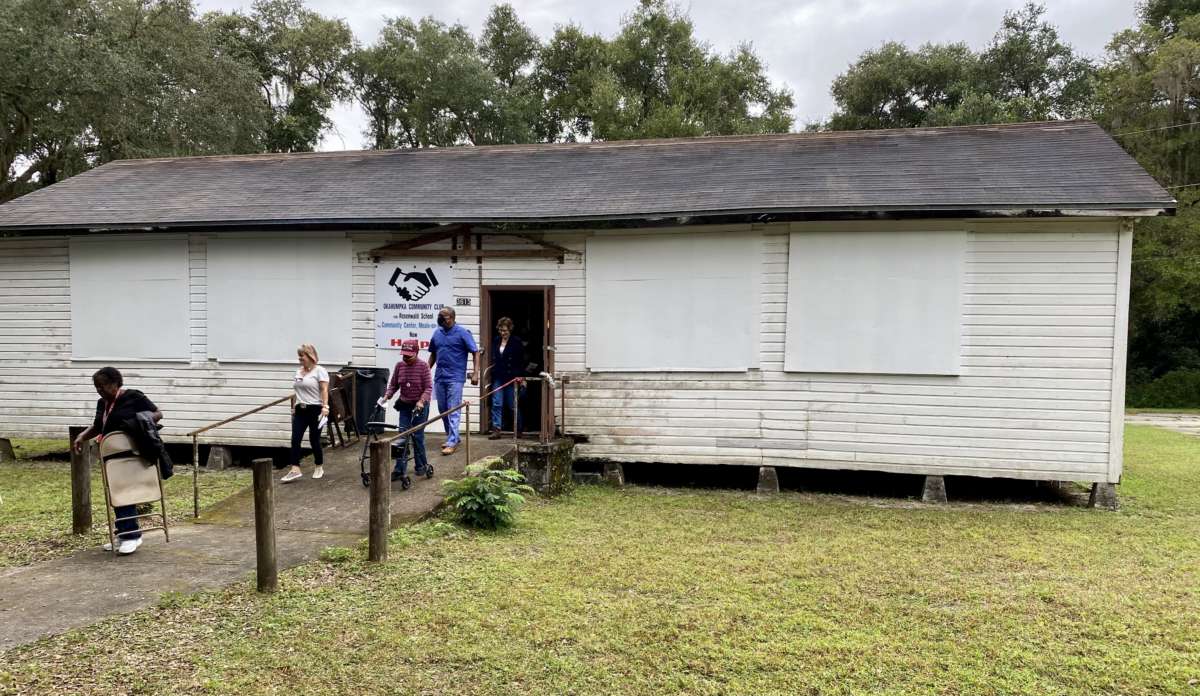 A vacant schoolhouse in Okahumpka provides a vivid example of the separate but unequal history of education in Lake County.

And the Okahumpka Community Club hopes to preserve that history by adding the building to the National Register of Historic Places.

Earlier this month, dozens of people gathered to unveil a historic marker outside the Okahumpka Rosenwald School.

Retired FBI agent Charles K. Fields led them in speeches and song. He grew up in this unincorporated area near Leesburg, in its close-knit African American community surrounding the historic school. For years, the community would gather here.

“You know, it’s changed in many ways but that doesn’t mean that the strength of the love and commitment, a sense of community and pride, has gone anywhere,” he said.

The two-classroom, wood-frame building went up in 1929 on the former site of the tiny schoolhouse where civil rights pioneer Virgil Hawkins got his early education. He would later apply to the University of Florida law school and force the desegregation of UF’s graduate and professional programs.

Hawkins’ parents donated some of the land for the Rosenwald school.

It was named for philanthropist Julius Rosenwald, who partnered with Booker T. Washington to establish the Rosenwald Fund and build schools to educate African American children throughout the segregated South.

Florida had 120 of them. Only 23 of those remain. From the outside, this one has largely kept its original appearance. Inside the walls are gone. You can see the studs and siding.

It was built with public funds and local support plus a $500 grant and design plans from the Rosenwald Fund.

“These types of schools have had a profound impact on America,” Fields said. “There were like 5,200 of these schools built throughout the Southeast educating kids who would not otherwise have had a place to go to school.”

Two years earlier, the county had built a new school for the white children of Okahumpka — a Spanish-style edifice with a tile roof, six classrooms and a 200-person auditorium.

The Rosenwald school had a small stage on the far side of the south classroom.

“Segregation in itself is a nasty word. But what it represents is horrible.”

That’s Chip D’Amico, a retired police sergeant who recently moved here from upstate New York. He’s spearheading the local campaign to get this building on the National Register of Historic Places.

The club wants to restore it and build a community center behind it. They want to add exhibits featuring Virgil Hawkins, the experiences of local students and the legacy of the Rosenwald Fund.

Christine Hamilton attended the school. She says her teachers had no tolerance for excuses.

“We didn’t have a lot of books,” she said. “Of course, the books we had were outdated. But we learned. Our instructors were very determined that we were going to get the best education we could from what we had.”

For some years, at least, classes went up to the eighth grade. At one point, a family bought a bus and would drive the older students to a segregated high school in Leesburg.

Dorothy Smith says they arrived there with an excellent reputation.

“When we left and went to Lake County Training School in Leesburg,” she said, “the teachers as well as the students didn’t have to ask no questions. They’ll say, OK, you’re from Okahumpka, you’re top of the class.”

Retired pastor David Connelly — who served as Leesburg’s first Black mayor — also attended the Rosenwald school. He says it was the foundation of many success stories.

“I never would have accomplished what I think I accomplished personally in life if I didn’t have the structure, the foundation and the discipline that these early pioneer teachers instilled in us,” he said.

The school closed in 1964 and was bought by the Okahumpka Community Club.

The state has approved their application for the National Register, and now the club is awaiting word from the National Park Service.