The upside — and downside — of Florida passing New York’s population 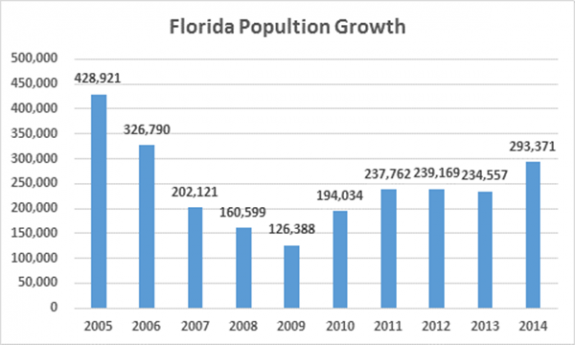 After a three-year plateau, Florida's population surged past New York for the No. 3 spot.

Florida’s population got a big boost in 2014: Nearly 300,000 people moved into Florida. That now makes Florida the third largest state after Texas and California, beating out New York.

90.7’s economic analyst Hank Fishkind spoke with Abe Aboraya about how the growth in population will affect the local economy – and the local job market.

“It creates demand for all the goods and services in the local economy,” Fishkind said. “It affects it directly because of the demand for construction to house people and the stores they will shop in. So it has a very large effect. And because we get a lot of retirees, retirees bring their incomes with them. So even though they don’t work in the local economy, they create a lot of cash flow and a lot of spending.”

On where the population growth comes from:

“This big fluctuation occurs mostly because of domestic migration,” Fishkind said. “In 2014, our domestic migration shot up to almost 140,000, up fifty percent compared to 2011, 2012 and 2013. Most of these migrants come from east of the Mississippi river.”

On if the growth will continue:

“The fundamentals are there to support stronger population growth,” Fishkind said. “We have tremendous job growth in Florida. We’re attracting labor force-age people. During the Great Recession, we lost labor face-age people because we lost so many jobs.”

On the possible downsides of growth:

“It’s always easier to manage growth than it is to manage decline,” Fishkind said. “Look at Detroit. As many problems as growth causes, a lack of growth causes more.”