The Future of The Star Motel is Uncertain: Here’s Why That Matters 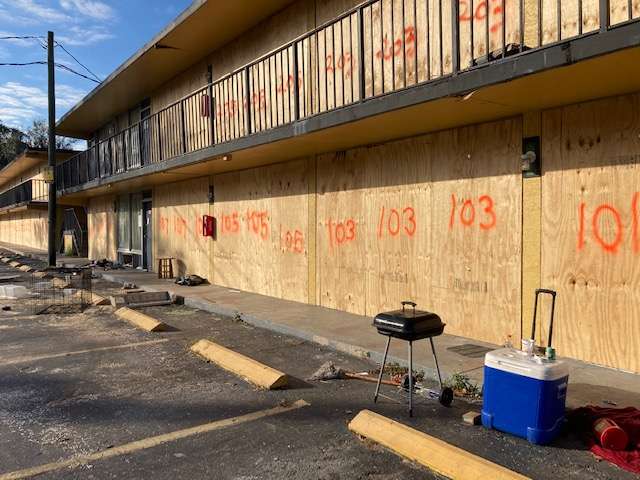 Today was the first day in weeks that the Star Motel in Kissimmee was silent, with no sheriff’s deputies or code enforcement officers on the property.

Manager Sarah Russo says that’s because Osceola County has boarded up most of the rooms that were vacant and even some of the rooms where people were living.

Russo says there’s only a handful of residents living at the motel now including her family and Disney worker Mike Beaver.

She says at one point though the Star was home and community for people who otherwise would have had none.

“This was family. This was home. It wasn’t just your everyday hotel. If anybody needed anything, one of the neighbors had it. Just like now.”

But with a nationwide eviction order up on Dec. 31 and no homeless shelters in the area, she says it’s wrong to close down the motel right before the holidays.

“It is literally unethical for somebody to literally sit there and board up 127 rooms knowing that there’s people out here on the streets that are trying to keep a roof over their head, food in their stomachs. That’s ridiculous.”

Russo’s not sure where her family will go with other low-rent motels like the Banyan being shut down too. The county will meet with the owners of the Star Motel in January to discuss the future of the property.

Even pre-pandemic, the Orlando-Kissimmee-Sanford metropolitan area only had 20 affordable homes per 100 l0w-income renters and some 2,000 people were homeless on any given night.

Now that Osceola County has been particularly hard-hit by the recession and pandemic, leading the state with a 10.4 percent unemployment rate, the affordable housing crisis in the area could get worse.

At one point, the Star Motel housed 127 families, some with children. About forty have been rehoused by the Community Hope Center.