The Future Of Medicaid May Be Found In Indiana, Where The Poor Pay 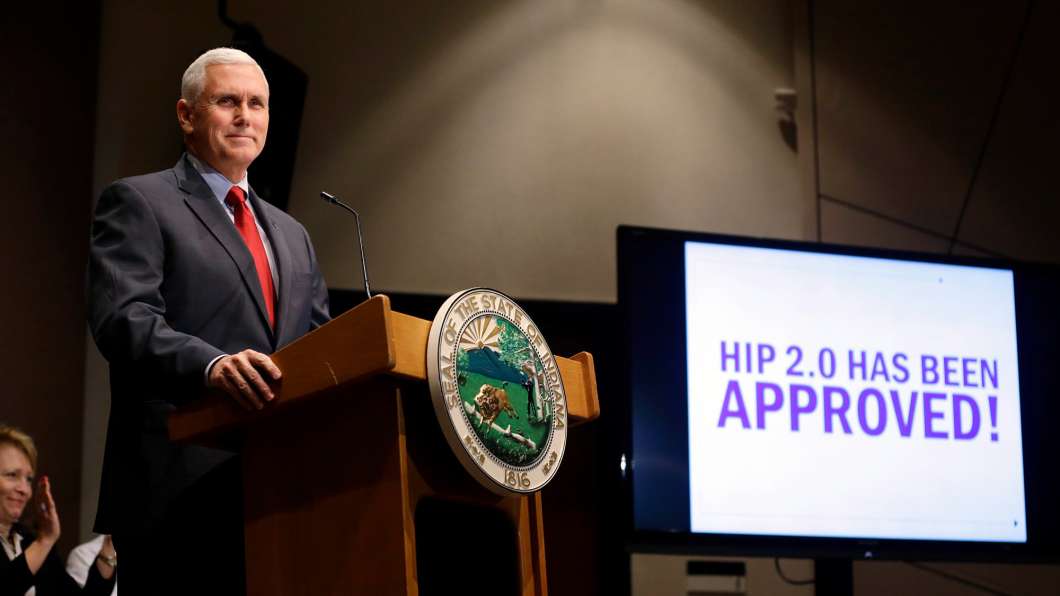 To get a glimpse of where Medicaid may be headed after Donald Trump moves into the White House, it may be wise to look to Indiana.

That’s where Seema Verma, Trump’s pick to run the Centers for Medicare and Medicaid Services, comes from. And that’s where she put her stamp on the state’s health care program for the poor.

Verma is a private consultant who was hired by Indiana Governor and Vice President-elect Mike Pence to design a Republican-friendly expansion of Medicaid under the Affordable Care Act. The state paid her almost $5 million over four years through 2017, according to the contracts.

She sees the federal Medicaid program as a bureaucratic nightmare that hamstrings states and encourages poor people to remain dependent.

“The Medicaid program has not kept pace with the modern health-care market,” she testified at a Congressional hearing in 2013. “Its rigid complex rules designed to protect enrollees have also created an intractable program that does not foster efficiency quality or personal responsibility.”

The plan she came up with for Indiana requires poor Medicaid recipients to make monthly payments for their insurance, or lose benefits.

“Seema was very committed to extending coverage to low-income families in Indiana,” says Cindy Mann, who was the CMS official who negotiated the deal with Verma on that state’s Medicaid expansion.

She says throughout the negotiations, Verma was “very committed to a particular ideology. That ideology is very much focused on personal responsibility.”

Verma did not respond to multiple requests to be interviewed for this story.

Pence was one of the few Republican governors who took the Obama Administration up on its offer to pay the lion’s share of the costs for states that expanded their Medicaid programs to people whose incomes reach 138 percent of the poverty level, or $16,243.

But rather than simply offer coverage to more people, the state sought a waiver to revamp their program. That’s the deal that Verma worked out with Mann.

Indiana’s program, which extended Medicaid to about 246,000 people who weren’t eligible before, is infused with Verma’s ideas of how to make poor people take responsibility for their health care.

It had a complex system of carrots and sticks.

Beneficiaries make monthly payments from $1 to about $27 into individual health savings accounts, and the state also contributes. That money can be used for doctor visits and prescriptions.

If beneficiaries get vaccines and other preventive care, they get a discount on their premiums the following year.

But they can also be penalized. People whose incomes are above the poverty line can be cut off for three months if they miss a payment. Those below the poverty line are knocked down to a plan with fewer benefits.

And if a patient unnecessarily goes to the emergency room, extra money comes out of the health savings account.

“There are many ways to try and effectuate personal responsibility,” Mann says. “Some states have moved forward with healthy behavior initiatives, for example. Some states have done some premiums and copays.” Indiana’s plan requires everyone to contribute to a health savings account. “And so the responsibility was really translated into payment requirements, and with pretty strong consequences if somebody was unable to pay.”

She says Verma and Indiana wanted the penalties to be even harsher — a full year with no coverage for people who miss payments. But CMS rejected that idea.

So how does it work in practice? For Amber Thayer, a mom of three who lives in a Volunteers of America family shelter in Indianapolis, it’s been a bit of a nightmare.

Thayer’s a recovering addict who has been clean for six months with the help of the medication Suboxone. And she’s training to be a nursing assistant.

“It’s been quite quite the struggle, but we’ve gotten there and we’re doing great and we’re getting ready to get into our own home,” she says.

She pays $1 a month for her Medicaid insurance.

In October she got a bill for that one dollar from a different company than the one she had been dealing with. She assumed the state had switched her.

“It is only a dollar,” she says. “I could pay a dollar a month or I could pay $12 and that will cover me for the year. Unfortunately at that time I only had I believe it was like $2.38 on my card.”

So she called the company and used her bank card to pay the dollar.

But the company, or perhaps the state, lost track of her dollar, and her insurance was cut off. She had her bank statement and a receipt from the insurer that proved she paid. But she still spent six weeks, with multiple phone calls and visits to state health offices, trying to get her coverage restored.

All the while she scraped together enough money to buy Suboxone one dose at a time.

But she was also afraid the loss of insurance would interfere with her ability to take her nursing assistant exam, which in turn would threaten the stipend she gets because she is in job training. “If I don’t get my stipend, we’re not going to have our money to help us move into our home.”

It’s these types of complications that have some advocates worried.

Adam Mueller, a lawyer for Indiana Legal Services, says he’s happy more of his clients have health insurance. But he says the state’s notion that people will feel more invested in their care if they pay $1 a month just doesn’t play out in the real world.

“They don’t feel like they have skin in the game,” Mueller says. “One guy told me that it feels like Indiana is trying to take his last $12.”

“”The social stresses of low-income individuals probably make most aspects of managing through the day more difficult than if you have more affluence and have more resources available to deploy,” he says.

Thompson, who’s a former Arkansas surgeon general, helped develop a Medicaid program in his state that had many of the same features as Indiana, including premium payments and health savings accounts.

In the end, Arkansas decided it just wasn’t worth it.

“We had about a year and a half of experience there, and candidly the administrative cost and the operating aspects exceeded what the legislature subsequently perceived the benefit of that program was,” Thompson says. So the state scrapped the health savings accounts.

He says the ideas about personal responsibility are politically popular, but implementing them is too complex.

“We lose too many folks along the way, and we may be causing more challenges than we’re solving,” he says.

Arkansas still charges nominal premiums for some Medicaid recipients, but they pay them directly to insurers. The carrots and sticks and individual accounts are gone.

Verma has advised several states, including Iowa, Kentucky and Ohio, that are looking for Medicaid waivers from the federal government. Many of those waiver applications include cost features such as premiums or health savings accounts or incentives for healthy behavior.

“The cost sharing policy is not to burden the individual,” she told lawmakers at the 2013 hearing. “I think it’s to incentivize them and empower them to be part of the equation.”

When Verma testified in 2013, she urged lawmakers to make the process of getting Medicaid waivers easier.

If she’s confirmed as administrator of the Center for Medicare and Medicaid Services, it will be her and her staff who review waiver applications and determine if they should go forward.