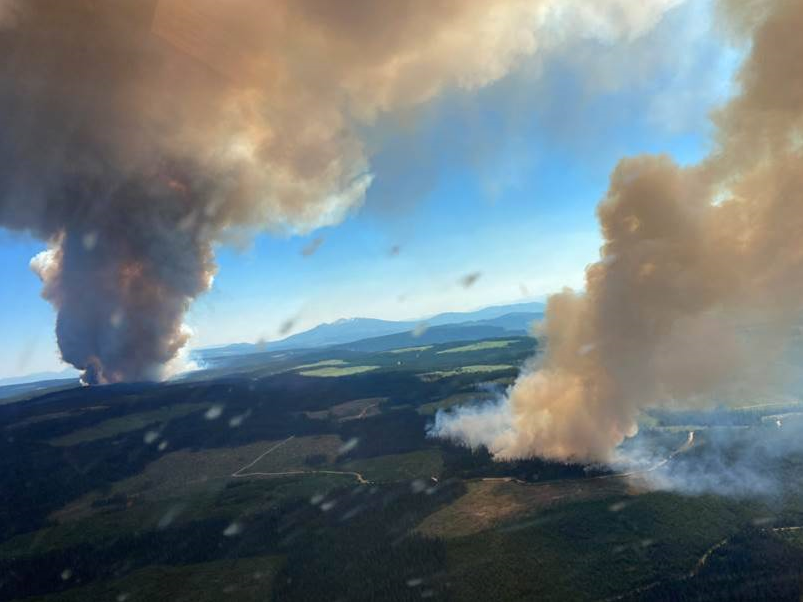 The British Columbia Wildfire Service is responding to multiple fires in the province this week. Two wildfires pictured here, the Long Loch wildfire and the Derickson Lake wildfire, are in close proximity and estimated to be 740 acres combined in size.

The entire village of Lytton in Canada’s province of British Columbia was evacuated after a wildfire quickly took over the small town Wednesday.

In his evacuation order, the village’s mayor, Jan Polderman described “fire in the village of Lytton” that “threatened structures and the safety of residents.” Roughly 250 people live in the town about 150 miles northeast of Vancouver.

Polderman told local media outlets that the fire “took about 15 minutes” to engulf the entire town not long after he issued the evacuation order at 6 p.m. Wednesday. Polderman told CTV News he picked up one man before driving away from the burning village.

The wildfires come after nearly four days of extreme heat in the region. The evacuation of Lytton came a day after the U.S. National Weather Service noted this week that temperatures reached 121 degrees in the small town — a Canadian record.

British Columbia reports more than a dozen other fires

The province is currently fighting multiple wildfires, according to the British Columbia Wildfire Service.

The flames that quickly consumed the community were part of a new fire, not the separate and ongoing George Road fire, about 123 acres in size, already burning south of the town, the wildfire service agency said.

Scott Hildebrand, chief administrative officer of the Thompson-Nicola Regional District told the Vancouver Sun, “It happened so quickly that we’re struggling to connect with everybody because power is down, cellphone lines are down. It’s a tough situation.”

The Cariboo Regional District issued an evacuation alert for Deka Lake, which is 100 miles north of Lytton, after five new wildfires sprung up in the area Wednesday, according to the region’s wildfire service.

Those wildfires started due to a severe thunderstorm that swept through the region, with lightning strikes igniting the dry grass in the area, according to the wildfire service.

“All of these wildfires are being assessed and will be actioned in a priority sequence,” the agency said on Twitter. “Ground crews, helicopters, air tankers, members from volunteer fire departments and heavy equipment have responded and will continue to do so over the coming days.”

Much of Western Canada remains under heat warnings as the bubble of high pressure moves east, the country’s weather service reports. Those conditions are expected to last through the weekend in some parts of the country.