The Deadliest Halloween Costume Of All 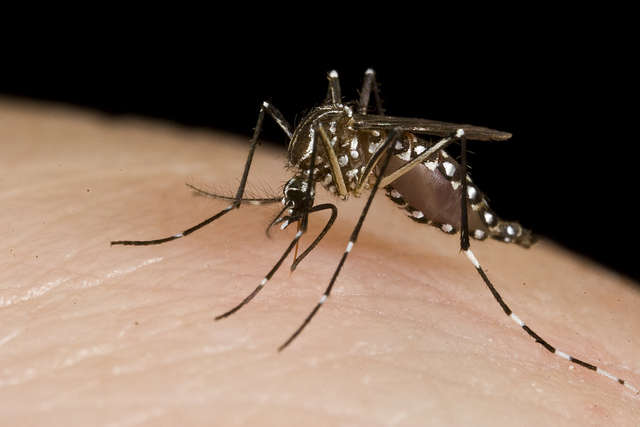 Florida has the perfect breed of mosquitoes and climate for the disease. Photo: Flickr Creative Commons

Say you want to dress up as the world’s scariest animal this Halloween.

All it takes is a couple of pipe cleaners, some Halloween fairy wings and a few other supplies (see complete directions at the end of this post) to transform into a mosquito, a creature that poses far more of a risk to humans than the usual suspects.

Sharks, for example, get a lot of press. But they are overrated as killers. In 2018, the death toll from shark attacks was four, a drop from the annual average of 6.

Snakes do take a devastating toll: the World Health Organization estimates 81,000 to 138,000 deaths annually from snakebites.

But that’s nothing compared to mosquitoes. One species alone, Anopheles, is responsible for nearly 600,000 malaria deaths each year, making it by far the most dangerous animal on the planet.

Mosquitoes feed on an infected person or animal and ingest the virus, which passes through the bug’s blood and eventually gets into its salivary glands. Then the bug bites, releasing its infectious spit.

Spraying efforts can be effective in eliminating the mosquitoes that cluster in areas where people live. Unfortunately, spraying doesn’t make a dent when it comes to Anopheles.

“They’re all over the place, and that makes it difficult to control them,” says Grayson Brown, executive director, Puerto Rico Vector Control Unit. “You can’t just spray a city. You’d have to spray the woods and everywhere, and that would have serious ecological impact.” Unlike other species of mosquito that buzz around during the day, Anopheles come out at night, feeding on sleeping humans. In middle-income and wealthy countries, people can keep them out of the house with tight-fitting screen doors and windows and by using air conditioning. In the developing world, bed nets are the most affordable defense, Brown says.

Mosquitoes are the deadliest of the eight vectors — tiny, blood-sucking critters that transmit disease from human to human or from animal to human — listed by the World Health Organization as the most dangerous to people. Together, these eight bloodsuckers are responsible annually for one million deaths and 17 percent of infectious diseases in humans.

Sand flies cause a particularly ugly disease, leishmaniasis, that infects 1.3 million people a year and kills 30,000. It’s found in parts of the Americas, Southeast Asia, West Asia, East Africa and parts of the Mediterranean region. One form of the disease, prevalent in Bolivia, Peru and Brazil, can lead to partial or total destruction of the nose, mouth and throat.

Ticks are a growing problem, causing a variety of serious fever diseases, including Lyme disease, which in the U.S. started in the northeast and has moved into other pockets of the country. Lyme disease now affects 7.9 people per 100,000 in the U.S. and has also spread to parts of Asia and Europe. It can be successfully treated if diagnosed early. Untreated, the infection can spread to joints, the heart and the central nervous system. Ticks also cause another disease, Crimean-Congo hemorrhagic fever, which kills around 40 percent of people infected, most of them in Africa, the Balkans and Asia.

One particularly gross bug has a romantic nickname: the kissing bug. Its proper name is the triatomine bug. “They’re the nightmare insect,” says Brown. “They crawl across ceilings at night, drop onto a person, follow the CO2 [carbon dioxide] trail to the mouth and feed on the mouth,” says Brown.

If it’s not bad enough to have a one-inch bloodsucking parasite on your mouth, the kissing bug adds insult to injury. “It turns around and poops on the feeding site.” The person wakes up, scratches the bite and gets infected from the bug’s excrement.

The bugs, which pick up infections from animals, are a particular problem in poor, rural areas, mostly in Latin America, where people might keep animals in their houses. In most people, symptoms are mild, including headache, muscle pain and fever. But up to 30 percent of patients suffer cardiac problems which, years after infection, can lead to sudden death from the destruction of the heart muscle.

Tsetse flies infect humans and cattle, carry sleeping sickness and shuttle the disease back and forth between the species, particularly in rural areas in sub-Saharan Africa. Not only do they cause human disease, but the economic impact from disease in cattle can be devastating, Brown says.

Fleas ride on the backs of rats, prairie dogs and other rodents that carry plague and transfer the disease when they suck the blood of humans. In addition to threatening poor populations living in close proximity to rats, they’re a problem for Siberian rabbit hunters, says Brown.

Black flies carry river blindness, a disease that causes itching, rashes and eye disease that can lead to permanent blindness. According to WHO, some 20 million people, mostly in sub-Saharan Africa, were treated for the infection in 2017. The Carter Center, founded by former President Jimmy Carter and Rosalynn Carter, is working with governments in a number of African and Latin American countries to eliminate the disease. The center and other international groups are supporting efforts to spray the black flies and provide anti-parasitic treatment to infected people.

Not all of the top eight vectors are bugs. Some aquatic freshwater snails carry parasitic worms that can spread a disease called schistosomiasis. Approximately 220 million people a year contract the illness through exposure to freshwater contaminated by the worms. If the victim is not treated, the infection can lead to anemia in children and, over time, can damage the liver, intestine, lungs and bladder.

But no animal, tiny or large, can compare to mosquitoes.

“Mosquitoes are responsible for killing 2,000 people a day,” says Brown. “More people die in an hour than all the shark attacks in a whole year. What other animal inflicts that kind of damage?”

How To Dress Up As A Mosquito For Halloween

In less than an hour, we made a mosquito costume, using supplies from a drugstore. A pair of large sunglasses stand in for big bug eyes. Two pipe cleaners affixed to a headband are the antennae. We bought pre-made Halloween fairy wings, then spray-painted them black. For the mosquito’s beak, we rolled up a piece of black paper 2 feet by 3 feet and used elastic thread to attach it to the head. The final touch: an oversize sweatshirt — red for all the blood this mosquito’s been drinking — with skin patterns created by black electrical tape. We hope you don’t get swatted!