Tampa Appearances By Trump, Biden Are A Contrast In Crowds, Views 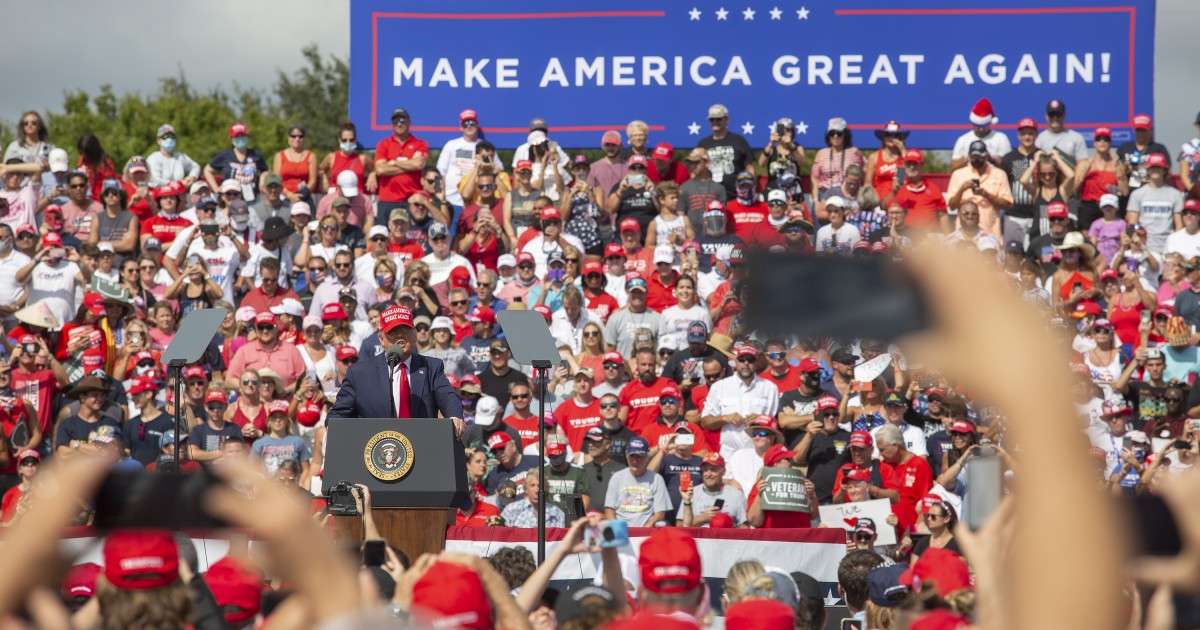 President Donald Trump spoke to a crowd of supporters attending a rally on Oct. 29, 2020 in Tampa. Most in attendance did not wear masks health officials recommend to prevent the spread of the coronavirus. Photo: Daylina Miller / WUSF Public Media

It was two tales of the same pandemic as both presidential candidates courted Florida voters in Tampa on Thursday.

Biden’s rally at the fairgrounds was a ‘drive-in’ event where attendees are encouraged to stay within touching distance of their vehicles. Tampa Mayor Jane Castor and fellow Democrats warmed up the small crowd, select people sitting in, on or next to roughly 100 cars.

Democratic candidate for president Joe Biden speaks to a crowd of supporters during a drive-in rally at the Florida State Fairgrounds on Thursday, Oct. 29, 2020 in Tampa. Photo: Luis Santana/Pool Photographer – Tampa Bay Times

That’s a distinct contrast from President Donald Trump’s rally in a parking lot outside Raymond James Stadium. It started just after noon and thousands of people packed the north parking lot lawn during an unseasonably hot day.

Keeping a 6-foot distance wasn’t an option for the Trump supporters cheering for the president to win a second term. And while red ‘Make America Great Again’ hats were in abundance, masks were few and far between.

Larry Jensen from St. Petersburg brought a mask but said he didn’t feel the need to wear it since he was standing near the back of the crowd. He works for a company that transports yachts and praised how the Trump administration helped his business during the pandemic.

“When everything was shutdown back in April, we got the PPP money and that really helped us,” Jensen said. “We kept everybody on our payroll the whole time and since then we’ve hired more people so it’s all good.”

‘It’s all good’ was a sentiment shared by many at the rally. Several people at the event said they were not concerned about the risk of contracting the coronavirus. The Centers for Disease Control and Prevention encourages people to wear face coverings and maintain a social distance of 6 feet from others.

Attendees remarked on the positive energy they felt being surrounded by others who shared their political views, like Cara Bowman of Venice. She worked as a nurse for 40 years and said she believes the COVID-19 pandemic is overblown.

“People from other states literally think everybody in Florida is getting sick and dropping dead because of the propaganda they hear on the other news stations that are lies and fake news,” Bowman said.

As of this week, Florida health officials report that coronavirus has infected nearly 800,000 Floridians and killed more than 16,600.

But while those numbers did not seem to weigh heavily on the people at the rally, heat-related illnesses did. There were frequent calls from the crowd Thursday for medical assistance. Standing close to others for hours in the hot Florida sun caused some attendees to collapse. Gov. Ron DeSantis stopped speaking twice to help direct medics.

Several people attending the Oct. 29, 2020 rally for President Trump were treated by paramedics after collapsing in the heat. Daylina Miller WUSF Public Media

The governor’s speech, and remarks from Attorney General Ashley Moody, Sen. Joe Gruters, the head of the Florida GOP and Trump described the pandemic as ‘nearly over.’

And like many in the crowd, they didn’t wear masks, and mocked Biden for quote “hiding” throughout the campaign and hosting socially distanced rallies.

By the time Biden took the stage six hours later, he was describing Trump’ rally as a super-spreader event sowing division and discord.

The fairground gathering was the antithesis. 100 to 150 cars pulled in to a parking lot. No one was rubbing shoulders – one of the announcers even asked people to give each other some space.

And every single person was wearing a mask.

They also were all invited guests. Jeanne Baldi of Brandon got in because her daughter works for the Biden campaign. She said Trump wants to end the Affordable Care Act, and her whole family has pre-existing conditions.

And she was ok with the socially distanced car rally.

“I think this is part of where we’re at today in the world, and this is taking the safety of the people that are attending into consideration, and taking into consideration what’s going to happen when they leave,” Baldi said. “Having people shoulder to shoulder at a rally is unconscionable, with the numbers where they are now.”

Supporters of Democratic Presidential nominee Joe Biden lined up hours ahead of a ‘drive-in’ rally being held on Oct. 29, 2020 at the Florida State Fairgrounds. Photo: Steve Newborn / WUSF Public Media

Bonnie Elozory of Tampa’s Lake Magdalene area was the fourth car in the lot. She spent much of that time draping her car with Biden placards and flags.

“I swear, it feels like going to a concert or something like that. It’s that same energy, and just nice to feel the positive energy,” said Elozory, who has a gay daughter and said she is afraid for her rights if President Trump gets re-elected.

“Everyone’s been talking to each other from a distance, and I’ve heard a lot of good stories today about why people are here.”

Biden came to Tampa because Florida is a must-win for the president, and he is betting that his message focused on shutting down the coronavirus through social distancing will win over the state.