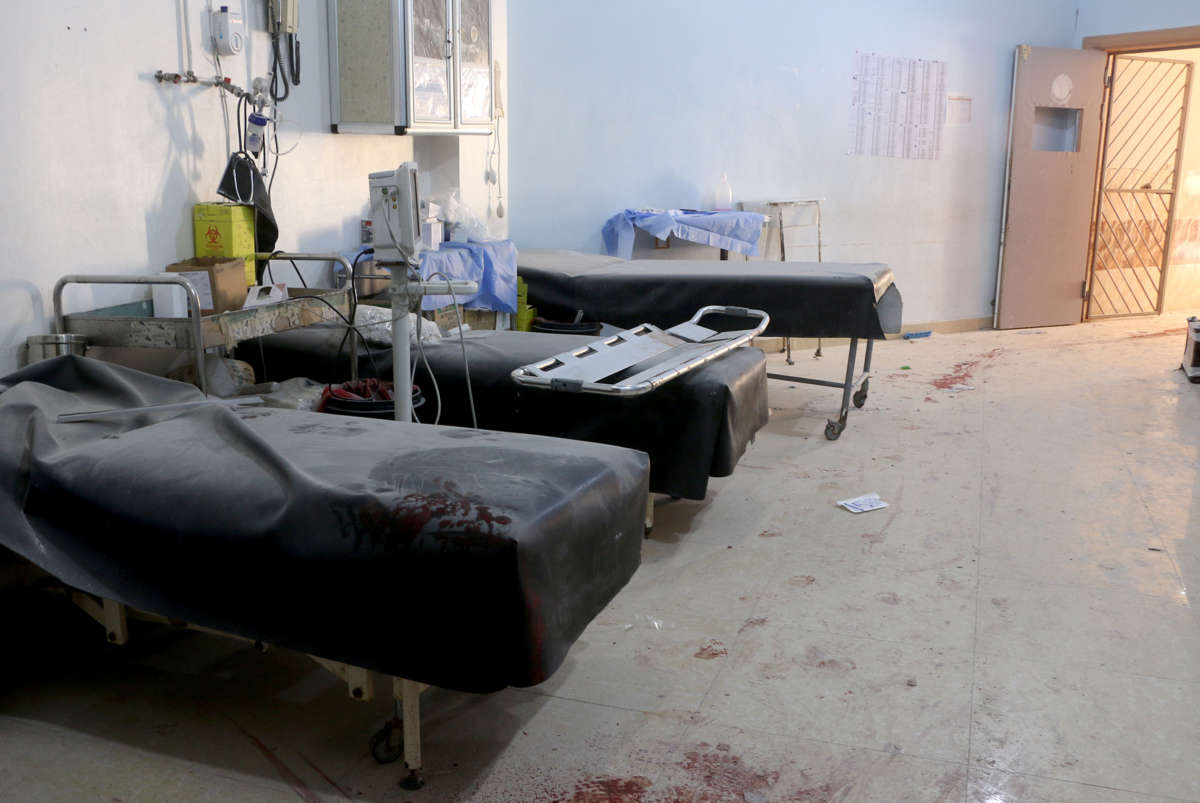 A March 21 attack by the Assad regime forces and Iran-backed terrorist groups targeted a hospital in Aleppo, killing six civilians and injuring 15. Above: A view of the damaged site.
Image credit: Kasim Rammah

Abdalhamied Sharaf Aldein, a doctor in rebel-held northern Syria, has survived airstrikes and barrel bombs by the Syrian government, or its ally Russia, while caring for patients in at least eight different hospitals and medical clinics.

Now working at a hospital in Bab al Hawa, close to the Turkish border controlled by the opposition, Aldein says the attacks have become so terrifyingly routine that it’s hard to keep an exact count. Sometimes the hospital or clinic where he was working would be destroyed, other times just damaged.

“If we were in the operation room [when the strike hit] we couldn’t leave the patient, even if our lives were in danger,” he says.

Health facilities are officially protected from attack under international law and the Syrian regime denies intentionally targeting civilians, including a 2016 statement from President Bashar al Assad saying “We don’t attack any hospital.”

But hundreds of attacks on medical centers and health workers during the Syrian civil war by the regime and its allies have been documented by rights groups, aid organizations and various United Nations bodies, including the World Health Organization.

In a decision that appalled and angered Syrian opposition groups and international medical organizations, on May 28 Syria was appointed to the World Health Organization’s Executive Board, made up of 34 member states. Representatives of these countries hold three-year terms in which they set the agenda for the WHO Health Assembly and help implement WHO policies.

“It was really, really shocking,” says Houssam al Nahhas, a researcher for the U.S.-based Physicians for Human Rights, a nonprofit that investigates and documents human rights violations.

Nahhas, a Syrian citizen now living in the U.S., says he was tortured in 2012 by the Syrian government after being placed in a regime jail for his work as a health-care provider.

A medical student at Aleppo University at the time, Nahhas helped treat people who had been wounded in anti-government demonstrations. Some had bullet wounds from live fire the soldiers sometimes used on the crowd.

“Throughout my detention period, all the torture was focusing on my role as a physician, who I was treating and how I got medical supplies,” he tells NPR. “They wanted to know names of the other health-care providers that were working with me.”

Nahhas says Syria’s appointment to the WHO executive board damages the organization’s credibility. “During this critical time where the world is working together to beat the COVID-19 pandemic under the WHO leadership, this sends a really bad message to countries and individuals that violating human rights can be a norm.”

Physicians for Human Rights has documented 540 attacks by Syrians government and allied forces since the war began in 2011. It says the regime has killed 827 medical personnel through either airstrikes or shelling, torture that led to death or execution.

In the days after the news of the appointment broke, activists posted pictures of medical workers in rebel-held Idlib holding up signs calling for Syria to be removed from the executive board as well as pictures of civil defense workers protesting with slogans that read “WHO told you that Assad is not a criminal? WHO is Assad?”

The Syrian civil defense group the White Helmets said in a statement that Syria’s “election [to the board] rewards the Assad regime despite its systematic destruction of hospitals and health centres, in addition to a long list of other war crimes.”

Physicians for Human Rights and the Syrian American Medical Society (SAMS), a global medical relief organization that has dozens of medical clinics in opposition-held Syria, have written a joint open letter to the director general of WHO, Tedros Adhanom Ghebreyesus, calling on him to “to do everything in your power to overturn the election of Syria to the WHO Executive Board” and emphasizing that board slots should only be “reserved for Member States with the highest qualifications and international standing.”

Who Decided Syria Was A Good Fit For The Board?

The decision to appoint Syria to the WHO Executive Board was made by the member states of WHO’s Eastern Mediterranean group, which comprises 22 countries — among them Afghanistan, Pakistan and many Middle Eastern states, including Jordan and Saudi Arabia. As such, Ghebreyesus does not have direct authority in the selection of the board members. But the letter asks him to at least openly criticize the appointment and take action similar to his revocation of the appointment of Zimbabwe’s Robert Mugabe as a WHO goodwill ambassador in 2017. That decision followed widespread condemnation of the appointment, given Mugabe’s poor human rights record and Zimbabwe’s collapsed health-care system.

WHO turned down repeated requests for a phone interview with NPR and failed to respond to written questions about whether the Mugabe case is comparable.

They did provide NPR with a written statement saying that Syria was appointed per the “standard process” in which it was chosen by member states and not the World Health Organization in Geneva. The statement said, “WHO’s mandate is to achieve better health outcomes for all people, including populations in all countries. We are neither equipped nor mandated to find political solutions.”

Article 7 of the WHO constitution says a member state’s voting privileges can be suspended by the Health Assembly if the country “fails to meet its financial obligations” to the WHO or in other exceptional circumstances.” This would likely include Syria’s allies, such as Russia.

In all cases such a move would probably not be palatable within WHO leadership, says Reinoud Leenders, an associate professor at King’s College of War Studies. Leenders published a paper on the politicization and distortion of aid in Syria in 2018 which looked at the work of U.N. agencies and other international non-governmental organizations.

He tells NPR that WHO has “collaborated closely” with the Syrian government. “Regime incumbents and their relatives have held key positions in the WHO’s offices in Damascus,” he says. And, he adds, they have access to sensitive projects and operations.

The Syrian regime tightly controls what access U.N. organizations and other international aid groups have and where in Syria they can operate. Leenders believes WHO and other U.N. agencies have been careful in how they push back against government influence because they fear that doing so will damage their ability to operate in the country.

Despite the wide body of evidence of regime attacks on health facilities that directly contravene WHO’s mandate, Syria has remained a member state. “It has not been reprimanded for any of its actions in the World Health Organization or its assembly,” he says. In fact, even before this appointment to the executive board, Syria was the vice chair of WHO’s Eastern Mediterranean group.

Syria will be represented on the WHO executive board by the country’s health minister, Dr. Hassan Muhammad al-Ghabbash, who has been on the U.K. and EU sanctions lists since 2020.

The U.K. and the U.S. have criticized Syria’s appointment. James Cleverly, the U.K.’s minister for Middle East and North Africa in the foreign commonwealth and development office, tweeted that Syria’s appointment to the WHO executive board “stands in stark contrast to the regime’s consistent targeting of medical facilities & workers. 3 UN bodies found Assad responsible for atrocities against the Syrian people. His regime will now play a role in the governance of the WHO.”

And Jalina Porter, the U.S. State Department’s deputy spokesperson, said in a press briefing this month that the U.S. has “grave concerns” to see Syria on the board. She said members of the executive board “have a duty to advance public health and likewise are expected to uphold universal values as well as human rights.”

In theory, all member states, including the U.S., could have sought to stop the appointment to the Executive Board. Any member state could have raised an objection when Syria’s nomination by the Eastern Mediterranean group was brought to the Health Assembly and forced a vote over it. No country objected at the time.

House Foreign Affairs Committee head Michael McCaul, R-Texas, criticized the decision in a written statement that said the Biden administration had effectively “tacitly approved” Syria’s election to the executive board.

A State Department spokesperson did not directly address the question when NPR asked why the U.S. had not objected to the appointment at the Health Assembly. They said they “no advance notice” of Syria’s nomination to the board was provided by the regional group.

How Will Syria Use Its Power?

Charles Lister, asenior fellow at the Middle East Institute, says regardless of how Syria came to be appointed to the WHO board, it “makes a mockery of the organization.” The question now, he says, is how Syria could use these powers to its advantage.

For example, U.N. investigators have gathered proof of attacks on health facilities and other violations which could one day be used as evidence in the prosecution of war crimes. Lister tells NPR that Syria could potentially use its position to protect itself against investigations like these.

“It [Syria’s position on the board] could also help strengthen the regime’s hand in pushing back against or even directly influencing the U.N.’s investigations and the results of those investigations into its attacks against hospitals, its blocking of aid delivery and other similar issues,” he says.

For now, Syria is set to hold this position on the executive for three more years. Despite critics’ calls for its position to be revoked, it’s not clear what the mechanism would be to do that. There is no sign that the member states that put Syria in this position will vote the country out.

Aid groups and rights groups hope that public outrage and criticism from states like the U.S. and the U.K. might move the WHO leadership in Geneva to try to force some kind of change. For now, there’s no sign that they want to try. Nahhas says the office of the WHO director general acknowledged receipt of the letter Physicians for Human Rights and SAMA sent, but so far, their questions have gone unanswered.