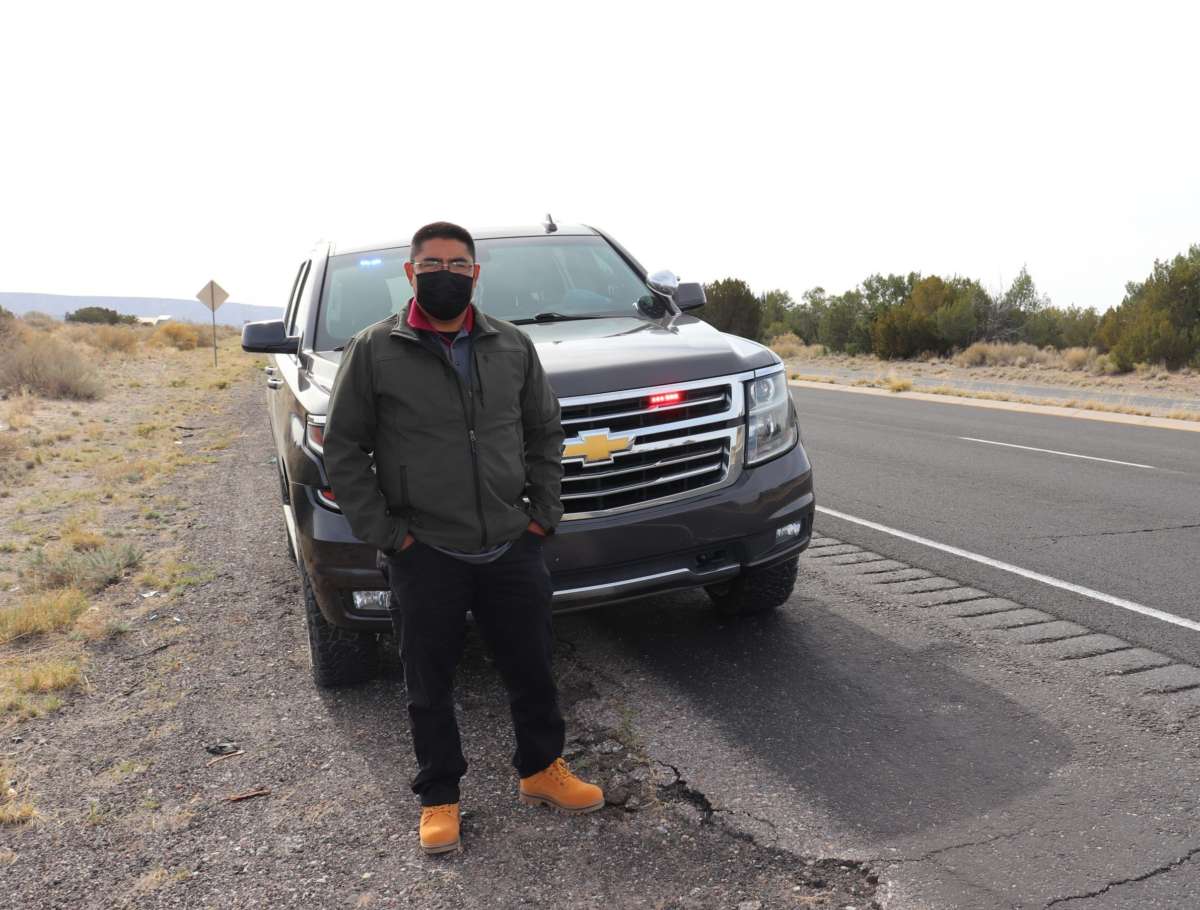 Jerome Lucero is the governor of Zia Pueblo in New Mexico, and one of its police officers.

“That gave me a red flag,” Lucero says. “So, I initiated my lights and sirens, but it took me about a mile to get [the driver’s] attention.”

When he approached the vehicle, there were more red flags.

“His pupils were restricted. They were so tiny, like a pin dot. And he didn’t even know where he was going. He thought he was still in Albuquerque,” Lucero says.

In fact, the man was about 40 miles north of the city.

“When I looked around his vehicle, I could see visually that he had heroin in the middle console, and a bunch of syringes in his door,” Lucero says.

Typically, this would add up to probable cause for an arrest. But Lucero is an officer with the Pueblo of Zia’s police department, and the driver was non-Native American. So, Lucero had to think twice.

“When I pull someone over, I have to take into consideration whether they’re Native or non-Native,” Lucero says.

Last week in United States v. Cooley, the U.S. The Supreme Court unanimously upheld tribal officers’ authority to at least investigate and detain non-Native people they suspect of committing crimes on reservations while waiting for backup from non-tribal law enforcement.

Authority to detain only goes so far

That’s exactly what Lucero did in the case of this traffic stop. But he says that authority to detain only goes so far.

“I started calling around for help and [the County Sheriff’s Office] didn’t even want to come out. They just flat out said they were busy,” Lucero says.

After four hours of waiting, Lucero was out of options. He impounded the man’s car and dropped him off in the nearest off-reservation town.

Lucero is also the Zia Pueblo’s governor, its top political leader. He says the authority to detain non-Natives believed to be committing crimes on tribal land is vital, but that when non-tribal law enforcement aren’t willing or able to come make an arrest, what’s left is a gaping loophole for non-Native criminals.

Elizabeth Reese, an assistant professor at Stanford Law School whose scholarship focuses on Indian law and a citizen of the Nambé Pueblo, said that loophole is a dangerous reality on reservations across the country.

“That federal officers might not get there for hours and hours and hours if at all, that state police might not want to get involved, that this whole network is an indefensible morass of complexity and unworkability that creates lawlessness and impunity for criminals” Reese says.

This complex system was created by the U.S. Supreme Court. In its 1978 ruling in Oliphant v. Suquamish Indian Tribe, the court stripped tribal nations of criminal jurisdiction over non-Natives. In the majority opinion, the justices wrote that they were “not unaware” of the public safety issues that would arise on tribal land, but reasoned it wasn’t their role to consider or mitigate them.

Last week, when the court issued its opinion in United States v. Cooley, Reese says the justices did take into consideration what was happening on the ground.

“In that oral argument, and in that unanimous opinion, I hear a court that’s very concerned about the public safety questions — about the serial killer on the highway that can’t be pulled over, and the drunk drivers getting back on the road,” Reese says.

She wonders if the court might someday reconsider the question of tribal jurisdiction over non-Natives and the precedent it laid out more than 40 years ago.

“There is this question in my mind about whether this step in Cooley is creating a slow-moving boulder collision course with Oliphant,” Reese says. “That could come in the next few years, decades, who knows. Indian law moves slowly.”

“This is the beginning of the end of Oliphant,” Nagle says. “I don’t think Oliphant was good law when it was decided and it isn’t good law today. Just like Plessy v. Ferguson wasn’t good law. The Supreme Court doesn’t always get it right.”

But Nagle isn’t just looking to the Supreme Court to resolve the jurisdictional issues in Indian country.

“Congress has the constitutional authority to do this,” Nagle says.

The latest reauthorization of the sweeping Violence Against Women Act includes a provision to grant limited tribal jurisdiction over non-Native domestic and sexual abusers who offend on tribal land. That bill is stalled in the Senate, primarily over a separate provision involving gun ownership restrictions.

“Recognizing that governments on the local ground should have the right to protect people in their communities without having to look to the federal government or an outside sovereign is a core conservative value,” Nagle says. “We need some of our friends on the Republican side to say that safety for women is not a partisan issue.”

A more complete jurisdictional fix would also be a tough sell in Congress. Some members of Congress would likely oppose expanded tribal jurisdiction on the grounds that non-Natives lack political representation on reservations. But Nagle doesn’t buy that explanation.

“I think what’s preventing the tiny handful of people who can’t get behind tribal jurisdiction is just prejudice about [Native people] and about our law enforcement and court systems,” Nagle says.

Lucero, the governor of Zia Pueblo, agrees that there is prejudice at work here, and a double standard.

Whether it comes from Congress or the courts, Lucero welcomes a solution to the jurisdictional challenges he faces every day. Until his department has jurisdiction to police non-Natives, he says the Zia Pueblo community won’t be truly safe.