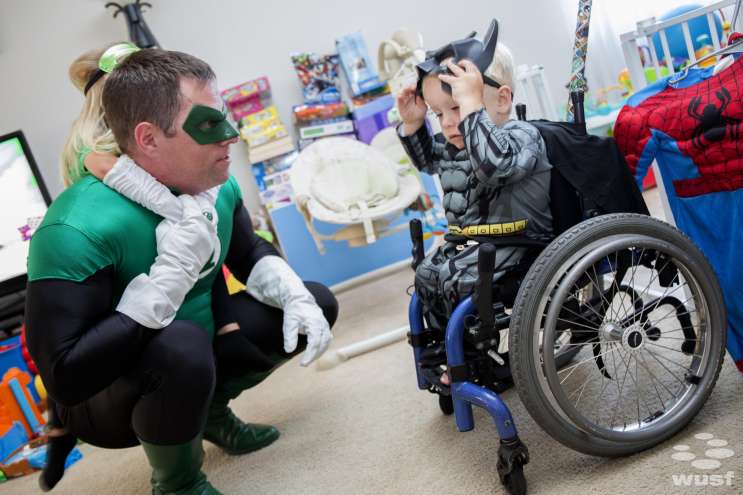 Some Tampa Bay area residents who like to dress up like their favorite comic book and movie characters are stepping into a new role. These “cosplayers” are volunteering their time to brighten the lives of children dealing with serious medical issues.

Five-year-old Cameryn Nester runs to her front door and throws it open. Standing there is her superhero “Green Lantern” decked out in a green-and-black spandex suit, mask and leather boots. He steps into the living room and Cameryn jumps into his arms.

Cameryn, who had open heart surgery last year, scampers away to grab her small, plastic Green Lantern figure. She brings it to her real-life version, who is the alter ego of New Port Richey resident Ben Jayko. She tells him the light isn’t working.

Jayko’s comic book superhero persona is part of his volunteering for the MUCH Foundation, which stands for Makers United for Children’s Hope.

Zachary Hurst is the founder of the year-and-a-half old group. A few dozen volunteers reach out to children who may be living with a disability or facing a terminal illness.

Visits with children range from a one-time trip to a hospital room to home visits that can span months or potentially years. “We’ll come in and visit them in the hospitals and right before there surgeries,” said Hurst. “We’re there when they wake up, we bring them presents and make them custom costumes and involve them in our group.”

Volunteers dress up like superheroes or Disney princesses, said Hurst, as a fun distraction for very sick children. This way, doctors and nurses can focus on the serious stuff.

“Kids genuinely connect with the superheroes. We like to have the big three – Batman, Wonder Woman, Superman – but we also find out that some children have absolutely fallen in love with the Flash or they attach to the Green Lantern,” said Hurst. “And he becomes their favorite superhero, so we will assign him to that family.”

Young Cameryn Nester met her personal superhero, Green Lantern, just before she had surgery at Johns Hopkins All Children’s Hospital in St. Petersburg.

Green Lantern/Jayko made her a Wonder Woman crown she refused to take off during the heart surgery. He loves retelling her reaction to doctors trying to remove the tiara: “No, Green Lantern says it’s mine and I have to wear it all the time.'”

Cameryn Nester’s 3-year-old brother Blake was born with sacral a-genesis, a condition that causes a shortened and deformed spine. Volunteers are building an “Iron Man” costume that fits over his wheelchair.

Patty O’Connor, Blake and Cameryn’s mom, said the foundation is raising money to get Blake a second sports-friendly wheelchair he can use at his favorite spot a local skate park.

“He goes to the skate park and he goes down the ramps by himself,” said O’Connor. “His chair now, he fell once but he got back up and kept going.”

The group also is setting a great example for Blake, Cameron, and her 7-year-old daughter, MacKenzie. They invite the kids to dress up in character and join the group at local community events.

“I want my kids involved in this because they’re learning stuff,” said O’Connor. “They’re not just getting, they’re giving back. That’s the most important thing to me.”

For 5-year-old Cameryn, she’s just happy knowing her personal superhero keeps coming by. The visits, complete with living room roughhousing, are a perfect distraction from her medical problems.

And as for the Green Lantern and his alter ego, they’re not certain what adventures await for young Cameryn. But whatever it is, he said, he will be at her side.