Studies suggest sharp drop in vaccine protection vs. omicron — yet cause for optimism 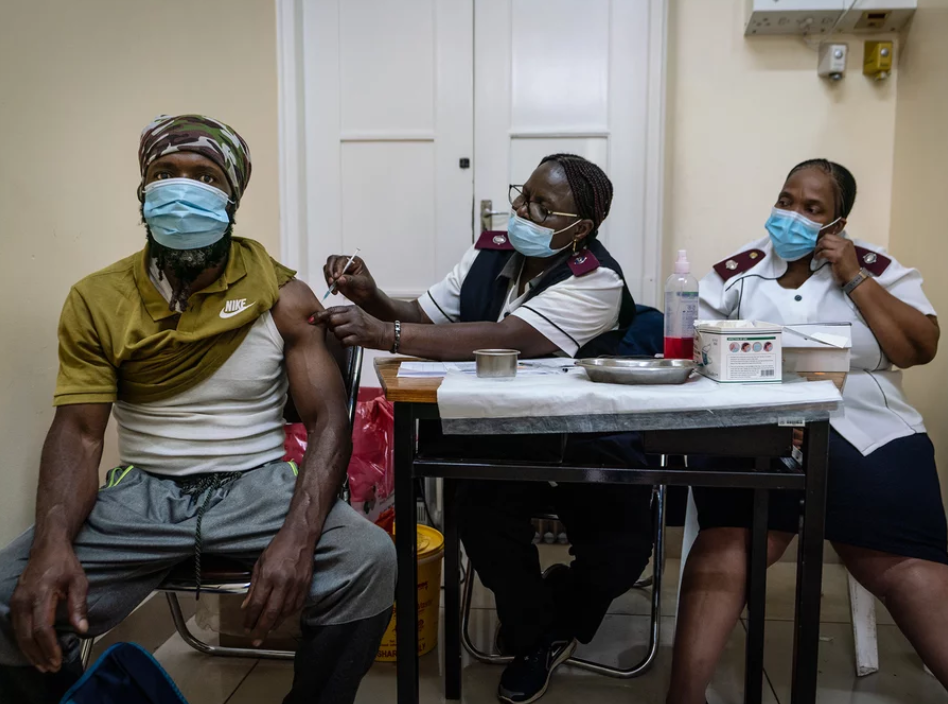 A man is vaccinated against COVID-19 at a clinic in Johannesburg, South Africa. The omicron variant appears to be driving a surge in South Africa. New studies suggest that vaccines might not be as effective against this variant but that a booster shot can be helpful. Shiraaz Mohamed/AP

With the omicron variant continuing to spread in a number of countries, including the U.S., scientists have been anxiously awaiting data to answer this question: How well will the vaccines work against this new variant?

The studies haven’t been peer-reviewed. But together, their data strongly suggest the vaccines will be much less effective at stopping infections from the omicron variant but will still likely offer protection against severe disease. The study in Germany also indicates that a third shot, or a booster, will partially recover the effectiveness of the vaccines, at least for a few months.

In the South African study, researchers at the Africa Health Research Institute took blood from about a dozen people who had been vaccinated with two shots of the Pfizer vaccine and looked to see how well their antibodies kill the virus. In the experiment, everyone’s antibodies were able to neutralize an earlier version of the virus quite well.

But against omicron, that ability dropped dramatically. On average, the antibodies were 40 times less potent against omicron than against the variant circulating in the summer of 2020.

And that’s a lot. “It’s astonishing … in terms of the reduction,” says Pei-Yong Shi, a virologist at the University of Texas Medical Branch at Galveston who has been doing similar experiments to determine the effectiveness of the Pfizer vaccine against the coronavirus.

“We seem to see a drastic reduction in neutralizing activity, far more than with previous variants,” virologist Florian Krammer, who’s at the Icahn School of Medicine at Mount Sinai, wrote on Twitter. “Little activity was left in vaccinated individuals.”

These findings confirm what scientists have been predicting since omicron was first detected several weeks ago. The virus contains many mutations already known to weaken the power of the antibodies made by the immune system.

Based on the results of this preliminary study, scientists say it’s likely we’ll see a lot more breakthrough infections with the omicron variant. And South Africa is reporting a lot of reinfections.

But the news isn’t all dire. The vaccine isn’t just about protecting against infections. It’s also about protecting against severe disease and death. And there’s reason to believe the vaccines will still do that, even with the omicron variant. Most of the people in the South African experiment did retain some ability to kill the virus. And scientists say even just a little bit of antibody activity can be enough to prevent someone from ending up in the hospital.

Also the immune system has other tools besides antibodies that can ward off severe disease. In particular, the T cells can clear out the virus after an infection. And scientists think those may hold up better against omicron than antibodies will.

On top of all that, the study from Germany shows that a third booster shot, with either the Pfizer or Moderna vaccines, increases the neutralizing ability of the antibodies to levels seen with the delta variant, at least for several weeks after the booster.

In that study, researchers at the Goethe University in Frankfurt looked at antibody potency against omicron and delta a half-month and three months after a third booster. In the short term, the antibody potency jumped up to the levels seen with delta in about half of the people. But after three months, most people’s antibodies had declined to the level seen without the booster.

“Preliminary neutralisation studies indicate that 2 doses of vaccines may not be sufficient to prevent *infection* w/ omicron (not severe disease), but regular boosters will help restore this decline to an extent,” Dr. Muge Cevik, who’s an infectious disease researcher at the University of St. Andrews, wrote on Twitter.