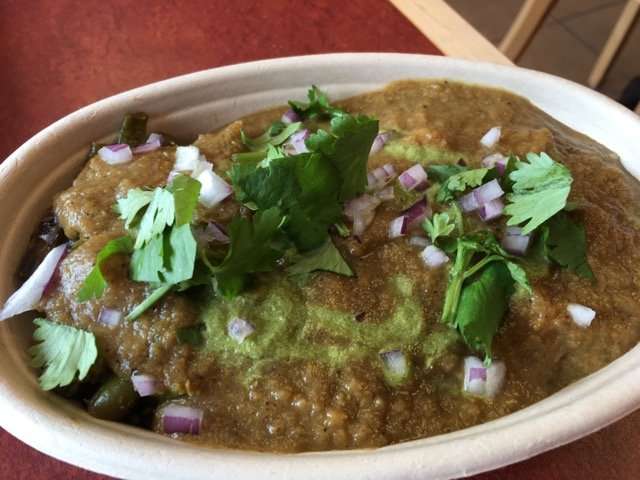 Next up in the assemblage line of restaurants: Indian cuisine.

Tandoori Bowl is a new restaurant on Alafaya Trail in Oviedo that employs the “one from column A, one from column B…” style of meal construction. Indian cuisine being what it is, however, you can expect more columns.

Here you start with your carb, either white rice or brown, which is simple enough. (You also have to begin by choosing regular or large size bowls; regular is plenty big.) Next you choose your protein, which might be chicken, lamb, paneer, chickpeas, pork or steak.

Pork or steak? Holy cow, what kind of Indian restaurant is this?

Then you add a vegetable, a less contemplative decision in that only carrots or green beans are available and neither carries any sort of religious quandary that I know of.

Now things get a bit hinky because you’ve got to select a curry, and there are six available, from mild to extra hot. But the staff at TB is there to help you with your choice. I was greeted by the two people working there and was immediately offered samples of all of the curries plus some of the chickpeas. I liked the chickpeas so much that I chose them over one of the meats.

I liked all of the curries, but I went with the Chennai Chettinad, which is listed as the hottest. Even then, I wasn’t done with the choices. I also had to select three “flavors” from such things as chutney, onion, garlic, cilantro and such. Even though more tastes were offered, the choices were daunting.

But I generally liked the bowl I had assembled, and the curry was sufficiently hot to make my scalp sweat. Nice for some of the cold weather we’ve been having.

I very much appreciated the friendliness of the staff. I felt welcomed, and their questions about whether I was enjoying the food as I ate in the small dining area were sincere.

The chickpea choice is being touted as a vegan option, which is nice. But some of the curries tasted as though they were rich in ghee, which would not be vegan friendly, so be sure to ask.

I know the pork and steak aren’t vegan friendly.