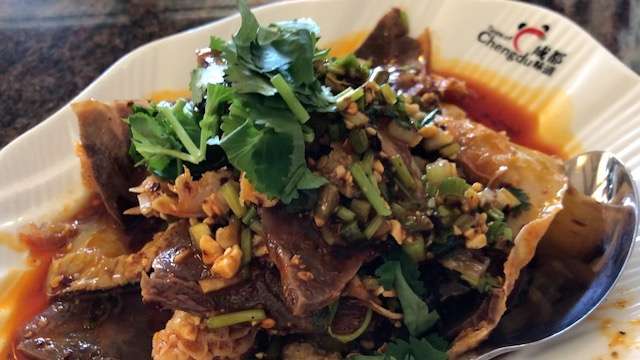 This review has been condensed for broadcast. Read the full review on this page at Scott Joseph’s Orlando Restaurant Guide.

If you hear people call Taste of Chengdu the hottest restaurant in town, you should probably know that they may not be referring to its popularity, though popular it certainly is.

It’s also serving some of the spiciest food you’re likely to find in Central Florida.

Chengdu is the capital of China’s Sichuan province, home of the Sichuan pepper, which has an initial taste that is slightly metallic but then spreads like a wildfire through tinder. It does not make your tongue tingle so much as it makes it throb.

And that leads, I suppose, to its popularity. There is a certain sector of the dining public with a masochistic tendency to sear their tastebuds. They’d probably lick a branding iron just out of a campfire if it was sprinkled with Sriracha. But we’re also seeing a new appreciation for authentic Chinese food.

Service isn’t speedy but it is helpful, and if you’re unfamiliar with Sichuan cuisine your server will be happy to guide you. You might be steered toward the Cold Noodles with Spicy Sauce, or the Five Spices Pork with Pancake. Or maybe the Spicy Hot and Sour Pig Intestine.

Intestines didn’t sound very appetizing to me, so I ordered the tripe.

Tripe with Roasted Chili Sauce, to be exact. As with most of the appetizers at Chengdu, the tripe was served cold. But make no mistake, it was hot, bathed in the oil based sauce that was dotted with chopped peppers. After two bites it didn’t matter what I ate because my tongue had gone numb.

But I could tell that the meat in my Stir Fried Beef Flank Steak was quite tender. And the onions and red and green bell peppers were still crispy on the bite.

According to my server, the foods on the lunch menu should be avoided because they’re American. You know, dishes like General Tso’s Chicken and Kung Pao. Look to the main menu for a real Taste of Chengdu.