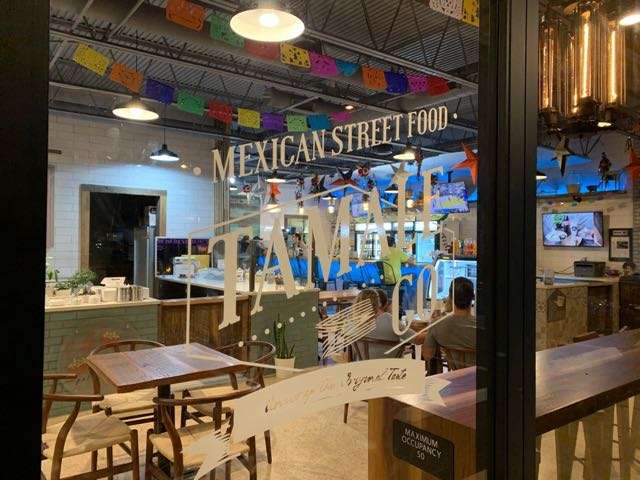 It’s really impressive how much a restaurant’s serving staff can affect the overall experience.

Of course it doesn’t hurt if the restaurant has good food to go along with a pleasant serving staff.

Tamale Co. has both. And now the popular food truck purveyor of fine Mexican fare has a nonwheeled location in Orlando’s unofficially designated Hourglass District.

It joins a few other businesses inside the solid walls of the Hourglass Social Club, which is sort of a latter day food court.

Tamale Co. has a sizable bit of the space, enough for a food and beer bar, and some tables and chairs for feet-on-the-floor seating.

I stopped in and was greeted quite cheerily by a young woman at the counter who offered to take my order. She seemed positively giddy to be working there and joyful to have another customer come in.

I ordered the Most Mexican, an unfortunately named combination of chicken and pork tamales with rice and beans. The tamales came conjoined by a topping of white cheese and sour cream and sprinkles of chopped fresh cilantro. They were both quite plump, their girth consisting not only of the firm-soft masa but also the ample fillings of meat. They sat in a mild salsa verde. The refried beans were good, too, but the rice didn’t rise to the same level.

On another visit I got the Chicharron Preparado, a large rectangle of fried pork skin topped with sour cream, tomatoes, cabbage and pieces of pickled pork rind. Delicious.

I also had the Carne Asada tamales, which had bite-sized pieces of steak on top of the tamale instead of stuffed inside. It also had generous slices of avocado and melted cheese.

For an un-tamale item I ordered a Chorizo taco, which had pork sausage in a soft corn tortilla, also with avocados and pickled onions. I liked it all.

My only concern with Tamale Co.’s new place is that it’s entirely too close to where I live. I fear I’m going to be here way too much.