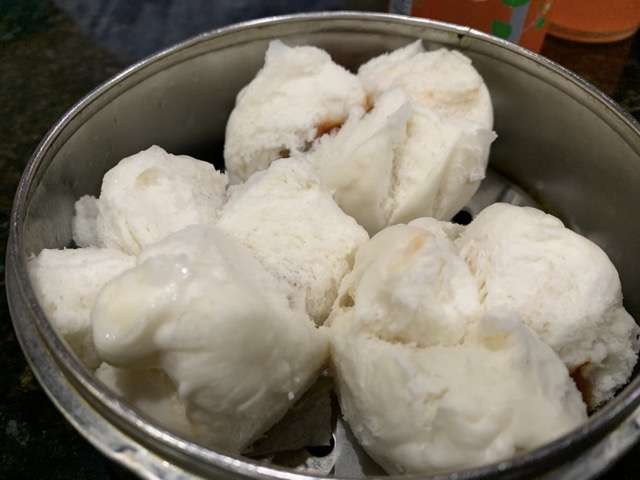 Scott Joseph reviews the Chinese restaurant in the Mills 50 District.

Some new friends, new to town, invited us to join them for Chinese food, but, naturally, asked me to select the restaurant. Based on its location, and the fact that it had been years since I reviewed it, favorably, I chose Ming’s Bistro in the Mills 50 district.

Why, right there on the front window was a banner with a quote and my name. As we passed it on our way inside, I thought my new friends must think I really know what I’m talking about.

By the end of the dinner they were probably thinking I don’t know a thing. The meal was largely a disappointment.

It started out promisingly enough, at least in terms of food – the surroundings are pretty unattractive these days.

Both the Steamed Roast Pork Buns and the Shumai dumplings were nicely done, well seasoned and satisfying.

But the same could not be said for any of the entrees that followed.

The Beef Brisket Casserole was bland and had too much gristle.

And Stir Fried Chicken with Cashews needed more seasoning. At least it had plenty of cashews.

No one on the staff made us feel particularly welcomed. Odd given that we were one of the few tables during prime dining hours on a Saturday evening.

I first reviewed Ming’s Bistro when it opened, in 2006, in a newly constructed building just east of Mills Avenue. I mentioned at the time that decor wasn’t an emphasis, but I did note a large fish tank at the far end of the dining room and a hot box with meats and poultry hanging on hooks. The hot box is gone. There is a fish tank but its water is too murky to see through.

Maybe it’s time to renovate a bit and focus again on serving the good Chinese food it started out with. As part of the remodel, it might be time to take that banner out of the front window.