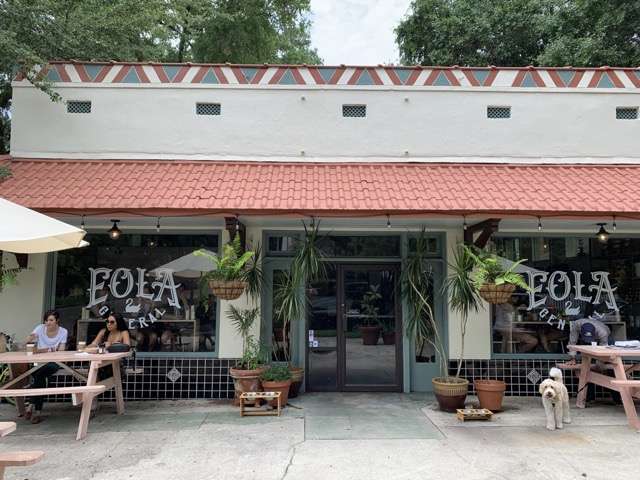 Eola General sounds like it should be the title of a soap opera, doesn’t it?

Instead, it is the name of a business in a residential area of downtown Orlando that is part restaurant and part market. It opened in April, so you may find it confusing, as did I, that the logo states, “Est. 1938.” That apparently is the provenance of the building it occupies. By that reasoning I should be able to state that I was born the year that my house was built. Unfortunately it only shaves two years off my age, so I might consider moving to one of those newer condos downtown.

The previous tenant of Eola General’s building was Handy Pantry, which would be a lousy name for a soap opera. It closed in Sept. 2018.

As I mentioned, Eola General is a combination of a market, or general store, if you will, and a cafe, though neither is done to category fulfillment. The market does have some staples — I noticed some milk and butter in one of the refrigerated cases creating a wall across from the sandwich counter (over which hang upside down bouquets of dead flowers, for some reason). But I don’t think shoppers would be able to do all of their everyday marketing here.

Not sure there’s enough on the prepared foods side to eat here every day, either. The menu is a modicum of items, mainly sandwiches.

On one visit I tried the sliders, which are portioned as a pair, choosing one egg salad and one tuna salad. There were ample amounts of each shoved between the mini buns, which also had a hefty handful of arugula. Pickles were involved, too.

I also tried the sandwich known simply as The Bagel. It had scrambled eggs (which looked an awful lot like an omelet, though admittedly it’s a fine distinction) with lots of bacon blended in, plus some cheese and plenty more arugula. (It’s lucky that I love arugula.) The fillings were good but the sesame bagel was a bit dry.

I was glad I returned for a second visit because the people working were a bit friendlier than before. I suppose they were just having a bad day the first time when it seemed like no one wanted any contact with other people.

And I think maybe they’re still figuring out how the concept will work. During a visit at the height of the lunch hour, I listened to one of the two people working list the things they had already run out of, mostly produce.

Gosh, if only there were a market nearby.