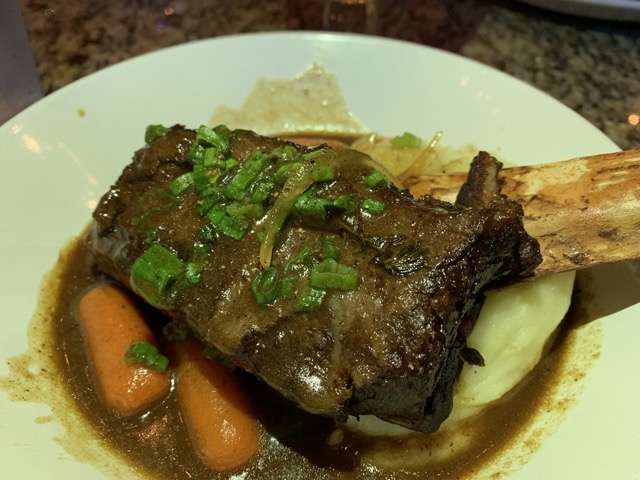 For my entree I selected that Short Rib Carbonnade, described as a “hearty Belgian dish” with a large braised rib with a gravy infused with beer, mustard and gingerbread. Photo: Scott Joseph

Buster’s Bistro is a bar. A Belgian bar, to be precise, though you’d be hard pressed to tell it apart from any other bar if you didn’t take note of the beer selections.

But BB’s menu is more ambitious than most bars, with such selections as Short Rib Carbonnade, Vol-au-Vent, and Tikka Masala Curry. The results are as varied as the selections.

My dinner guests and I shared a Bistro Board, an array of salami and cured meats, cheeses and pickles with toasted bread.

For my entree I selected that Short Rib Carbonnade, described as a “hearty Belgian dish” with a large braised rib with a gravy infused with beer, mustard and gingerbread. The meat rested on the bone which in turn was on a scoop of mashed potatoes accompanied by carrots. It looked good and had little droplets of fat that indicated it was made in house. And it all would have been fine if the meat hadn’t been so tough.

One of my guests chose the Vol-au-Vent, a puffed pastry with bits of chicken in a thickened (a little too much so) béchamel sauce. A stack of fries seemed out of place next to the delicate looking pastry.

They were more appropriate with another guest’s Strip and Frites, so named because it was a more substantial piece of meat than usually served with Steak Frites. It was an impressive steak, pan seared nicely but just a tad too far past the requested medium rare. But of all the items, it was the most successful.

Certainly more so than the Chocolate Mousse, a puddinglike concoction in a small cup, topped with whipped cream.

Brownie a la Mode was simply that, a chocolate brownie topped with vanilla ice cream.

Service was friendly but could have been more attentive (why refill only one water glass when there are two others also empty?).

Perhaps I would have been prepared if it had been named Buster’s Bar instead of Bistro. But ultimately, modest food is modest food wherever it’s served.