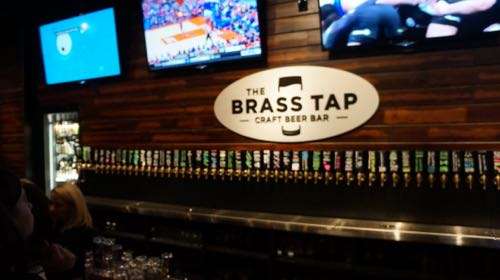 I’m trying really hard to come up with a reason that people would choose to go to the Brass Tap, the beer-centric chain that recently opened at Mills Park with others planned to open soon.

It has 60 taps of craft beers, but other places in town have beer lists just as impressive. So what else would make someone want to come here more than once?

It wouldn’t be the atmosphere. The box-like interior is small and spartan. There is outdoor patio space, but the traffic on Mills Avenue doesn’t offer much to look at unless you’re a fan of NASCAR races.

They certainly won’t be clambering to return for more of the food, at least not based on what I sampled. My guest and I started with the interesting sounding Buffalo chicken dip. It featured shredded chicken in a blend of Buffalo-wing sauce and cream cheese, then drizzled with ranch dressing. It was a big “meh,” which turned into a bigger “wha?” when I realized I’d paid $8.49 for unattractive and bland glop. And for that price they could serve a better grade of tortilla chip, not that that would have improved the dip at all.

My guest chose the meat lovers pretzel pizza, which is supposed to feature a crust fashioned out of pretzel dough. Except for the pieces of rock salt adhering to the edges of the crust, there wasn’t anything the least bit pretzel-like about it. And the pepperoni, sauce and Canadian bacon were applied rather chintzily. Tough love.

I was intrigued by the prime rib tacos, and who wouldn’t be? What sort of picture do you get in your mind when you think of prime rib? I’ll bet it isn’t the sort of thinly sliced roast beef that you find inside an Arby’s sandwich, but that’s pretty much what it was. Served in two soft flour tortillas, the tacos were dressed with a slaw of cabbage and carrots. A side of the disappointing tortilla chips accompanied.

Service was pretty much what you’d expect from a beer joint.

But there was one saving grace: The beer was nice and cold.