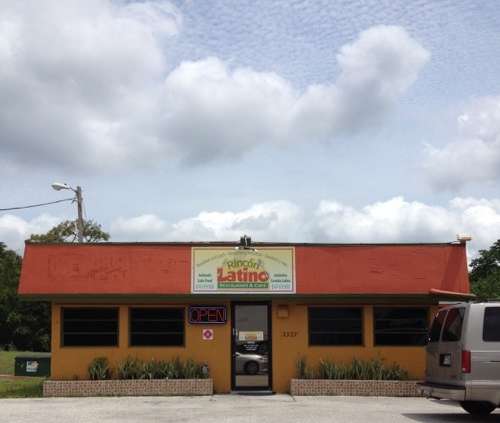 For many years I’ve had a little favorite Cuban cafe on Forsyth Road called Rincon Cubano. I’ve been recommending it to people for a long time, and I always hear back from those I’ve sent there how much they liked it, too.

So I was a little concerned when I was driving by recently and saw that the name had changed to Rincon Latino. I figured I’d better stop in and give it a try. My fears worsened when I walked inside and found the small dining area empty of any other guests, even though it was the height of the lunch hour (and the cafe is only open for breakfast and lunch). But I also noticed something else: the place was tidier than I remembered it. And the pleasant young woman who stepped up to take my order at the counter allayed any lingering worry when she assured me that even though the name had changed, “It’s still the same food.”

There is a menu of sorts but what you want to do is stroll over to the other end of the counter and have a look at the prepared hot entrees on display. Tell the other nice lady which one you want — she’ll happily explain each dish to you — and she’ll load up your plate or takeout container.

And when I say load, I mean load. I got the roast pork — yes, I would like some of the crispy skin, thank you very much — on top of rice (congris, please), with fried sweet plantains and a couple of ladles of sauce over everything.

What a feast. The pork was juicy and tender, the chicharrones seasoned and crispy. The congris, rice mixed with beans, was a perfect mound of fluffiness and flavor. The plantains were OK, though I think I might have preferred tostones. Next time.

And there will be a next time. Because the only thing better about such good food and plenty of it is the bargain basement price: $6.99, including an “American soda” or bottled water. What a deal.

Why was it empty? I can’t say. But I recommend you do whatever you can to fill the seats and support this terrific little cafe.