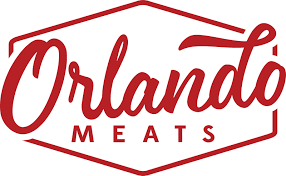 I pretty much knew what I wanted as soon as I scanned the small menu board over the ordering counter at Orlando Meats, a small butchery on Virginia Drive. As someone who always orders his burgers medium rare, I couldn’t pass up one whose entry on the menu actually reads “Medium-rare Burger.”

It was either the burger or the item called the Heartbreaker, which features fried pig heart. Tough sell. Maybe if they were called something else. Perhaps Orlando Meats should take a cue from the marketers who turned pituitary glands into sweetbreads or bull testicles into Rocky Mountain oysters. Maybe Pig Beaters? Just a thought.

But where was I? Oh yeah, standing at the counter and ordering my Medium Rare Burger that I did not have to specify be cooked medium rare from a patient young man, who I later learned is the owner.

I ate my burger at one of the several wooden top tables in the spotless storefront space. The burger looks a bit smallish, but don’t be fooled by first impressions — its thickness was substantial and there was plenty of grass-fed beef between the slices of French bread that served as a bun. It was so juicy that it actually oozed onto the waxed paper on the metal tray before I could even touch it.

And yes, it was a perfect medium rare (some might complain that it leaned toward rare, but not I). The meat juices filled the mouth and the true taste of meat was forefront. There was a bit of melted provolone — not too much — and just a swipe of pickled mayo. I wondered if I was going to have to request some extra sauce; none was needed. In short, this was one damn good burger, worth every cent of its $12 asking price.

And it came with a stack of Tallow Chips, potato chips fried in rendered beef fat. Some of us are old enough to remember that McDonald’s fries were originally boiled in tallow, which was arguably what made them so irresistible. Good times.

Orlando Meats is a full-service butcher, just like in the old days. Perhaps to make that point, the butcher wears a straw boater. The stock, according to the website, is limited to locally raised meats, which might mean an hour or two drive away. That qualifies as local in my book.