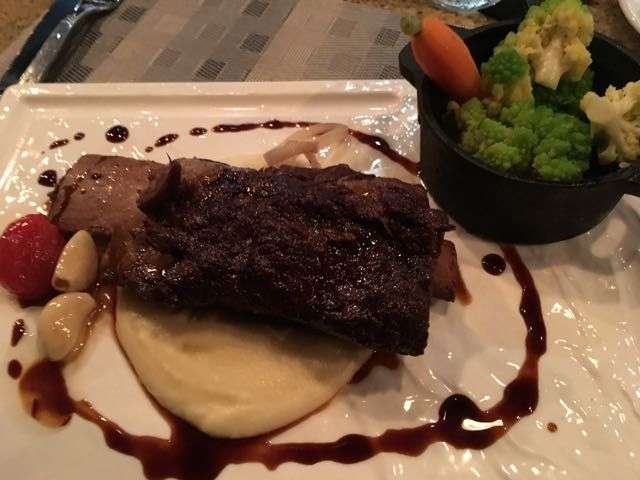 Don’t assume, as I did, that Market to Table is just another way of saying farm to table. Chef Ryan Freelove freely admits that he sources some ingredients from more conventional means, including major distributors. (Though not exclusively; indeed some items come from as close as a rooftop garden.)

But that does not diminish the overall high quality of the food served here.

My guest and I started by sharing an appetizer of Seared Sea Scallops, three beautiful disks with a golden sear on a pillow of truffled potato puree. The scallops were firm and fresh tasting.

My companion chose the Braised Short Rib. Although it was served on the bone, it was only precariously so, the meat balanced atop a bone stretched across pureed potatoes. The meat was about as tender as meat can get without melting.

I rarely order steak in a restaurant that doesn’t designate itself as a steakhouse, but one of the cooks touted the Filet Mignon as the best thing on the menu. It was fine, as steaks go, and cooked to the requested medium-rare. And the red wine reduction sauce that decorously circled the plate was a nice accompaniment. But I think I’d find something else on the menu to tout that shows more creativity.

Which brings me to another niggle. This dish, too, was served with pureed potatoes and an identical crock of romanesco and carrots. With the scallop appetizer, that was three servings of pureed potatoes. It would be more desirable to offer less standardized servings. In a restaurant that wants to be taken seriously for its cuisine, the dinner plate shouldn’t be a boilerplate.

But, as I said, a niggle. The staff were all friendly and more than accommodating.

By the way, after dinner at Market to Table, head to Pilars, a fun little bar and lounge in the front of the building. There’s almost always live music, and it’s always entertaining.