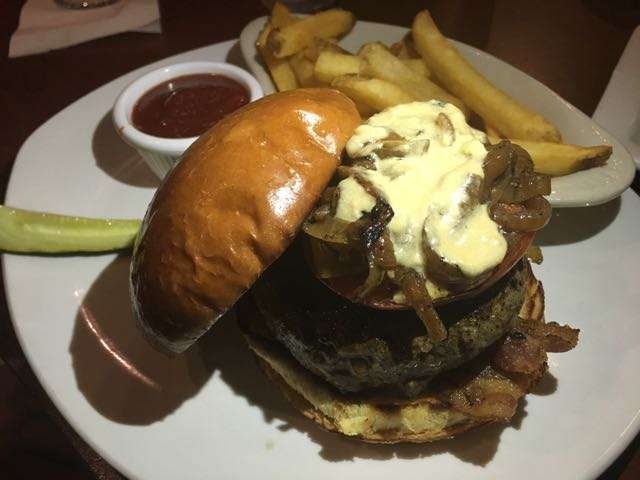 I recently made a second visit to Cork & Fork, a restaurant in the Belle Isle neighborhood. I made my first visit there two years and three days earlier.

I didn’t write about it then because I found the restaurant, its food and its service to all be equally banal. (The name of the place, too, as long as I’m at it.) Also, it occupied a space that had not been known for keeping tenants very long. I figured it would slink off into obscurity without any help from me.

But it’s stayed on. So I figured it was time to stop in again and check the place out, to see what has kept it going.

And it certainly appeared to me that Cork & Fork is trying harder than it did when it first opened. In fact, if there’s one thing I can heartily recommend it is the Blue Crew Burger, though I can’t offer any insight into why it has that name other than the blue comes from the Gorgonzola sauce that tops it. The crew part escapes me.

But the burger itself was quite good, a thick patty that retained its medium-rare juiciness even as the exterior was nicely charred. Thick rashers of bacon sat beneath the patty and a hefty slice of tomato was on top, along with sauteed onions and that sauce. It was, in all, a pretty good burger.

The Drunken Scallops entree gets points for creativity but loses some for execution and appearance. The diver scallops themselves were fine — plump and firm and deftly sauteed. But the sauce, a reduction of beer with bits of bacon and a touch of cream, was unappealing. The dish included a mound of garlic mashed potatoes, which for some reason had two slices of toasted bread stuck into it like bunny ears.

One of my guests had the Fish & Chips, which featured a nicely battered piece of cod, deep fried and served atop a handful of fries.

The restaurant retained much of the decor from the previous occupant and has the feel of a New Orleans courtyard. The atmosphere is much more tavernlike than restaurant.

Maybe the people who live in the vicinity of South Conway Road and Hoffner Avenue have decided that good enough if good enough, that it’s better to have any kind of independent restaurant over the chains that dot nearby Semoran Boulevard as it sinks to the airport. I’m fine with that; support your local business. Cork & Fork would do well to accentuate its positives — its burgers and pub fare — and not worry about being a creative kitchen.

I’ll check back in two years.