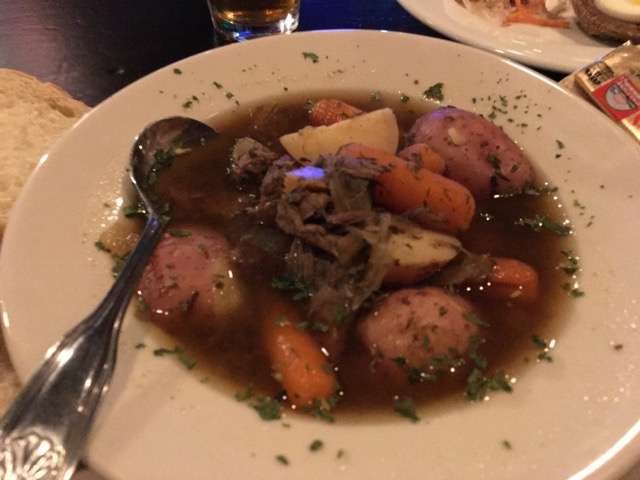 Was it ever really gone?

Any out-of-towners wandering into Claddagh Cottage Irish Pub in the last few weeks might be surprised to learn that it has been away for close to a year and a half. It thrums with the laughter and chatter of a full house, background to the lilt of traditional music, sometimes recorded, sometimes live. Despite its relative newness, it feels comfortably worn, familiar.

We in-towners know that this is a new location for Claddagh, which was forced out of its small strip mall spot to make way for a new Walgreens. (You can blame us aging Baby Boomers and our need to have a pharmacy close enough get to using a walker.) The original closed its door after a last New Year’s Eve celebration Dec. 31, 2016.

Since then, owners Scott Vocca and Vicki Gish searched for a new location that wouldn’t leave a loyal customer base behind, struggled with construction and permitting setbacks, and fought to get the taps flowing again.

They may not think it was worth it. But for all the woes and tribulations of moving and restarting, the new Claddagh Cottage, just a hair over a mile from the old spot, is better than the one it replaced.

For one thing, it’s bigger. Not Raglan Road big, nor too vast that seating isn’t at a premium on most nights. But it has a good balance between more space and a get-to-know-your-neighbors closeness.

And another improvement: The bigger building afforded the luxury of a larger kitchen, one that is used to full advantage by chef Justin Murphy.

There’s an expanded menu, or there will be — a limited soft-opening menu was only available on my visits.

My companion and I started with a plate of Scotch Eggs, hard-boiled eggs in a thick coat of sausage, breaded and baked. The sausage had just the right amount of spice.

For my main I chose the Irish Stew, a hearty and homey soup with hunks of meat and carrots plus plenty of iconic potatoes, still jacketed, as they say. The beef broth was good and full flavored.

My friend had the Steak & Mushroom Pie, with good-sized pieces of meat and lots of meaty-textured mushrooms blended in a brown gravy sauce under a house-made flaky crust.

Vocca, Gish and their staff help to keep things moving and making sure everyone is having a good time. If you go on an evening when live music is offered you’re in for an especial treat.

The front door from the old place was saved from the wrecking ball and now stands, along with other parts of the old facade, as the entrance to the kitchen. Other elements from the original location, including wood posts and bar tops, were also incorporated into new space. Not all of the bar is the original — this one is bigger, so new wood had to be brought in.

But you’d never know it hasn’t been there for decades.